The Supreme Court of the United States made a landmark decision last week that states cannot constitutionally (i.e. legally) ban same-sex marriage. The bottom line: under the Constitution, every citizen is entitled to the same rights and freedoms regardless of sexual orientation. Most of the world celebrated with the USA over this decision (the US thus became the 21st nation to legalize same-sex marriage).

Homophobia – which like racism, intolerance and Islamophobia, are all cornerstones of the uber-right platforms – is not legal. Equality is. And that’s what the decision was all about.

While the majority of states had already legalized same-sex marriage, 13 of the “fly-over” states still behaved in a medieval way by banning it. Now they can’t because it violates that most precious document of American governance, the Constitution. And to oppose the Constitution is nothing less than treason.

One would hope that in a civilized world, after all the arguments, the legal challenges and the debates, once the matter was settled, that everyone would simply accept the decision like mature adults, pull up their ‘big-boy’ pants and move on. And most have.

Everyone, that is, except for the Tea Party Republicans and their bigoted, homophobic followers. Instead they have whined and moaned like drama queens ever since the court’s decision was made public.

The Republican Party’s presidential candidates uniformly condemned a Supreme Court’s ruling that enshrined same-sex marriage as a nationwide reality on Friday.
Some struck a more alarmist tone than others.

END_OF_DOCUMENT_TOKEN_TO_BE_REPLACED

I’ve been reading of late about gluten. How it works, how it develops, why it matters. Gluten is the key to good bread and pasta (the gluten-free fadists notwithstanding, gluten-free anything is an aberration that should be shunned by anyone not diagnosed with celiac disease*).

I’m learning more about how gluten links with itself to form the chains necessary to make our food, and how to improve it in my cooking. The Canadian Grains Commission tells us:

Gluten is a protein composite that accounts for 75 to 85% of the total protein content in bread wheat. Gluten component proteins are found in the endosperm of mature wheat grain, where they form a continuous framework around the starch granules… Gluten forms when water is added to flour and is mixed. During mixing, a continuous network of protein forms, giving the dough its strength and elasticity. By holding gas produced during fermentation, the protein network allows bread to rise.

Key words: “Gluten forms when water is added to flour and is mixed.”

At one point, I tried adding extra vital wheat gluten to my doughs to help create a better crumb when I felt it was failing, but I’ve learned that is unnecessary with the typical unbleached white flour I use. With the mixes of whole grain, rye and heritage flours, however, it might help. But it seems the best remedy is mixing and time.

Recent books on baking bread and making pasta have provided me some new insights into gluten in both bread and pasta, which are, of course, related by their common component: flour. Gluten – the wheat protein strand that gives dough both its plasticity and elasticity – is essential to both bread and pasta. But it doesn’t automatically develop to its fullest without human intervention.

…there are ways of controlling gluten to obtain the optimal amount of gluten development for the particular baked good you are working with. These include:

Humans have been eating wheat and its gluten for at least 10,000 years. Approximately 1% of us has celiac disease, a severe intolerance to gluten. Another 3-6% have a lesser intolerance. The other 93% of us can digest wheat and gluten with no ill effect, as we have done so for ten millennia.

END_OF_DOCUMENT_TOKEN_TO_BE_REPLACED

It would seem that much of Ontario, and many of its stronger municipal councils, are voicing opposition to the province’s ill-advised plan to sell Hydro One to a private, for-profit group, and are writing to the premier to protest.*

The popular sentiment is that selling an essential utility like hydro – that brings the province almost $340 million annually – makes about as much sense as throwing your paycheque out the car window while giving the car keys to a total stranger. It will only make us less competitive and less attractive to business and industry. It will hurt small business and our competitiveness.

Once Hydro One is in private hands, we lose all control over this essential service. We will never be able to recapture it. But the Wynne government is determined to give us long-term pain for a short-term gain, and in the process push us closer to an American-style corporate control of our resources. This is from a government that recently decide what the province needs most right now is more MPPs – more snouts at the trough to waste our tax dollars – instead of more teachers or nurses or someone actually productive.

It’s another example of the (G)Liberals blundering into policy swamps for which they have no maps or guides. While I have never agreed with the inconsistently-cobbled-together Tory energy policy, at least they never threatened to sell a public utility. Clearly the (G)Liberals have ceased pretending they are working for the greater good and are cruising on an agenda we voters and taxpayers were unaware of at the time of the last election.

And where, you ask, is Collingwood Council in this debate – a debate that is crucial to our future? With its head in the sand.

END_OF_DOCUMENT_TOKEN_TO_BE_REPLACED

The story in this weekend’s Connection about Block 9 underground parking incorrectly suggests council is doing something right when it was actually trying to do something wrong. But they tried to take credit for doing good when their efforts at malice failed.

I expect mistakes like this from the Enterprise-Bulletin because it doesn’t have anyone on staff with a history that goes back very far (aside, that is, from the generally bad, mistake-prone writing that makes it painful to read…), but not the Connection.

Let’s leave aside the dubious legality of going behind closed doors over parking for a moment (which the media didn’t question…) and discuss the parking issue.

END_OF_DOCUMENT_TOKEN_TO_BE_REPLACED

The latest wingnut theory is that an asteroid will land in the Caribbean that month, swamping Puerto Rico and the Dominican Republic. It will create 300-foot tsunami waves up to the east coast of the USA. Florida will be completely inundated. As you might expect, the source of this fantasy is a religious wingnut:

Efrain Rodriguez a musician and a prophet for 41 years. A sound testimony’s brother .He belongs to the Iglesia de Dios Pentecostal, MI,(International Movement) a faithful and the first and oldest Pentecostal church in Puerto Rico

And the religious wingnuts* tie it all in with the zany Book of Revelations and the imaginary “Rapture” that has somehow avoided arriving for the last two millennia.  But, of course, you can buy their book or video, to get the whole picture (ka-ching!). Might as well spend your money on them now, since you’re about to die in a few months… or not…

END_OF_DOCUMENT_TOKEN_TO_BE_REPLACED 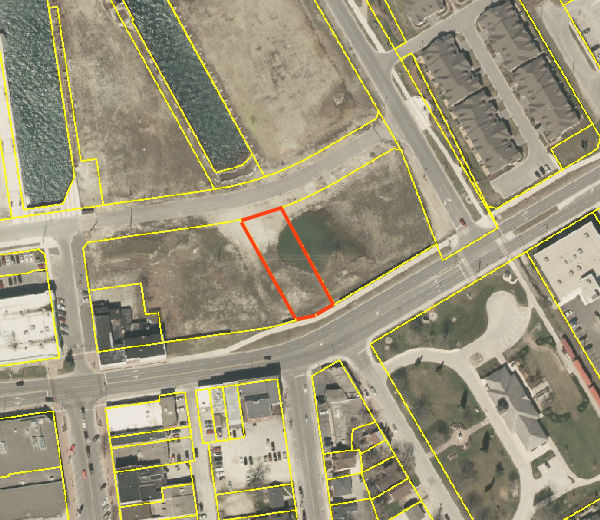 I went down to the harbour today to take a couple of photographs of the piece of town land known as “Block 9.” I wanted to show my readers just how little a piece it is and what condition it’s in now. The aerial photo above shows the property outlined in orange (the photograph is several years out of date, but the property lines remain the same).

The photograph below shows the land from the northwest corner, looking southeast. Notice the water that has collected because the land lies much lower than surrounding properties and has no drainage (no, it isn’t a swimming hole: it’s a breeding ground for mosquitoes). Also notice the hoarding along the south that extends along Huron Street in front of the private property, but only to the eastern edge of the town property: 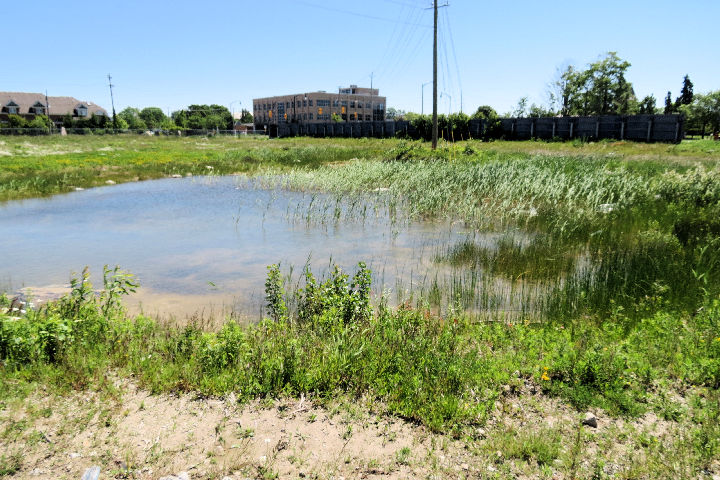 Here’s a photo looking southwest from the northeast corner. the building on the right is the new Bank of Montreal building. Notice the hoarding on the left does not extend across the border of the town land, so the public can see this dreary piece of untended, public property. Shouldn’t the town be forced to live up to the same property standards the rest of us have to obey? 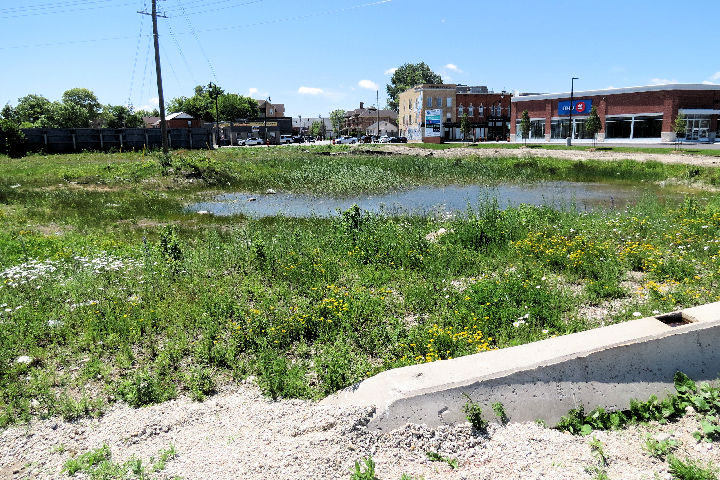 END_OF_DOCUMENT_TOKEN_TO_BE_REPLACED

Come, fill the Cup, and in the Fire of Spring
The Winter Garment of Repentance fling:
The Bird of Time has but a little way
To fly–and Lo! the Bird is on the Wing.