Fox News host Pete Hegseth has said on air that he has not washed his hands for 10 years because “germs are not a real thing”.

That’s the headline you read on dozens of media sites and shared throughout social media (this one from BBC News). Instant reactions (mine included) were “ewwww…” followed by negative comments on Fox News in general. But when you stop to think about it, could it be true? Can someone actually go a decade without washing his hands?

No. Surely he bathes or showers regularly. One can’t believe a TV show host would be so unhygienic. His co-hosts would surely comment. Maybe he’s not as observant of the niceties of personal hygiene as others, but a whole decade?

And face it, it’s difficult to believe that even a Fox News host is so stupid as to not believe in germs. Alex Jones, and maybe the other fringe wingnuts like anti-vaxxers and flat-earthers could believe such piffle, but surely not a mainstream media host with a university education. Could he? OMG!!!! the tweets erupted.

Predictably, social media lit up like a pinball machine over this comment. So Hegseth tried to explain:

Mr Hegseth later told USA Today that his remarks were intended to be a joke.
“We live in a society where people walk around with bottles of Purell (a hand sanitiser) in their pockets, and they sanitise 19,000 times a day as if that’s going to save their life,” he said.
“I take care of myself and all that, but I don’t obsess over everything all the time.”
Of the public reaction, he said it was ridiculous how people took things so “literally and seriously” so that their “heads explode”.

He’s right. We react and often over-react. We are knee-jerk trained. Social media has made us into Pavlovian emotional hair-triggers. I am sometimes guilty of it, too, because I am as susceptible to confirmation bias as everyone else. No matter how hard I try to use reason, sometimes those eager little response hormones kick in first. Having our beliefs confirmed is comforting and reinforces them.

But Hegseth’s joke, if indeed it was one, didn’t get everyone laughing. It was a joke without a punchline. A lot of people believed it was true. And others found fault his later explanation, as noted in The Guardian:

On Twitter on Monday, Hegseth gave mixed messages. He claimed he had been joking and paraphrased the president in blaming the media for being so “self-righteous and angry”. He also said he supported drinking from hosepipes and riding bikes without a helmet…

END_OF_DOCUMENT_TOKEN_TO_BE_REPLACED 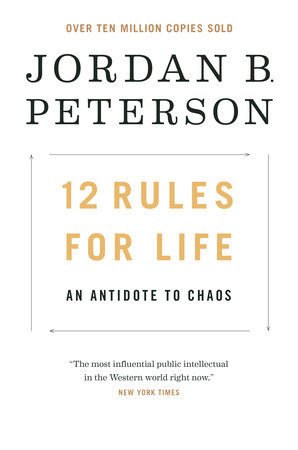 I really wanted to read this book objectively, separating it from the media hype and social media torrents of opinion and abuse that often accompany its author, Jordan Peterson. I wanted to consider it in the company of the vast number of already-published self-help or philosophical books, and the historical context in which they exist.

Sadly, I was unable to do so for one simple reason: there’s too much Jordan Peterson in it. You have to wade through far too much of him to get to the rules. He meanders quite a bit, mostly to ramble on about himself. The rules are, themselves, rather diluted by his presence.

Jordan Peterson is undoubtedly a smart, well-educated man and a reasonably good writer, but sometimes he comes across as a pompous, supercilious git. And that obfuscates the intended message, at least for me.

Peterson is, like I said, a smart man. I cannot dispute his statements on psychology or human development because he knows more about it than most of us. And he references several of his statements with citations to such awe-inspiring academic documents as “Allostasis and allostatic load implications for neuropsychopharmacology,” “Tool use induces morphological updating of the body schema” and “Dimension models of personality: The five-factor model and the DSM-5.” Who am I to argue with these sources?

For those of us on a less-lofty plane, he also references the Bible, poems of W.B. Yeats, Solzhenitsyn’s Gulag Archipelago, Lao Tse’s Tao teh ching and the Guardian newspaper. Whew. Something I can read and maybe understand. But these references don’t cover the voluminous number of claims and statements in the book. It’s full of pithy epigrams and aphorisms.

There are only 220 noted sources and no separate bibliography. Peterson makes a lot of statements that, without being referenced to a citation, are either vague generalities or simply opinions. For example:

Eco-activists, even more idealistic in their viewpoint, envision nature as harmoniously balanced and perfect, absent the disruptions and depredations of mankind. (p13-14)

I don’t know which “eco-activists” he spoke to, but that sort of romanticized, even naive (if not downright puerile) view of eco-activism doesn’t match any viewpoints I’ve heard or read from anyone who might fit that description.  And you can read a lot of them online. David Suzuki, for example, arguably Canada’s most well-known environmental activist, doesn’t say anything of the sort. His own website neatly defines his views:

We are interconnected with nature, and with each other. What we do to the planet and its living creatures, we do to ourselves.

I’ll chalk this one up as an opinion, and a politically-biased one at that. The Catholic World Report noted in its review:

Peterson wades into a muck of assertions without argument; disconnected similes and examples that insult reason; arbitrary and happenstance judgments; and implications that are dangerous in their banality.

Here are some other statements I pulled at random, also not referenced to any source or publication:
END_OF_DOCUMENT_TOKEN_TO_BE_REPLACED

After years of research* and development, I have finally worked out the details for the treatment of the viral NAWHS (New Age Woo Hoo Susceptibility) syndrome: GWT or Gullibility Whack Therapy. And I’m going to found my own institute: The Whack-a-Wacko Institute of Common Sense Therapy. I stand to make millions.

It works like this: Every time a client utters a comment about the healing benefits of any flavour of New Age woo hoo including homeopathy, who avoids vaccinations, gluten and GMOs, who quotes Dr. Oz, Dr. Mercola or Gwyneth Paltrow, who confesses to using ear candling, magic crystals, reflexology, reiki, feng shui or aromatherapy, who professes a belief in astrology, guardian angels, auras, psychics or tarot cards, who prefers “alternative medicine” or ayurveda instead of real medicine, or goes to a “medical intuitive” instead of a real doctor has precisely 30 seconds to cite scientific research that validates their claims or get whacked.

I’ll come to your home, your workplace, your favourite restaurant or pub and stand behind you. Every time you utter some pseudoscience or New Age codswallop, I’ll whack the back of your head and shout “bullshit!” for everyone to hear. I’ll stand with you in the grocery store line and if you dare pick up a Goop, Dr. Oz or Oprah magazine, you’ll get a whack. If you tune into Gwyneth Paltrow’s new Netflix TV show, I’ll whack both you and the TV set. If you stop in the mall to look at the display of essential oils, I’ll whack you.

I’ll offer various levels of treatment with graduated scales from Gentle Reminder using a feather duster to Are You Off Your Freakin’ Rocker? using a dog’s latex squeaky toy — a loud one, so everyone also hears it. I’ll have rates by the hour or by the whack. Given the raging amount of woo hoo online and the susceptibility of people to the babblings of poorly-educated glitterati, I will have no shortage of potential clients.
END_OF_DOCUMENT_TOKEN_TO_BE_REPLACED

Rule number one in The Elements of Journalism is: “journalism’s first obligation is to the truth.” Number three is “Its essence is a discipline of verification.” Keep those two in mind as you read this.

I recognize that local reporting is not always the same calibre as the investigative journalism we expect from national media, but in my view (and experience as a former reporter and editor), blindly accepting claims about health, wellness or science without questioning, let alone confirming them through a credible source, and then repeating those statements in a story is not responsible reporting. It’s just typing.

There’s a recent story on Collingwood Today titled, “Firefighters getting charged up by new wellness device” that strikes me as a good example of poor journalism. The story is about Collingwood’s Fire Department buying a mat,

…called a Seqex, and it uses Pulsed Electromagnetic Field therapy to help the firefighters detox, relax, and heal when necessary.
The device comes from Health Wellness Industries in Collingwood, where the owner and president Kim Sartor has built a business selling and offering treatments in the Seqex system.

The manufacturer is SISTEMI SRL (Italian Society of Seqex Electro Medical and Innovative Technologies), and they have numerous products all that start with Seqex, such as Seqex Fam and Seqex Radiant Mat. Which particular one this is could have been easily confirmed with a five-second internet search. Or maybe a single question. Several Seqex products were recalled in 2016, by the way, because the company didn’t have a licence to sell them in Canada until late 2017.

You already know from many, many science-based articles debunking it that detox is New Age woo hoo, not a treatment, nor a cure. It is, as Science-Based Medicine calls it, “Ritual purification masquerading as medicine and wellness.” The site also notes, “Detox Scams are Worthless and Potentially Dangerous” and calls it “a marketing strategy… designed to treat a nonexistent condition.” Any detoxification your body does is through your liver, colon and kidneys not through smoothies or electromagnetic stimulation. That too, a reporter could easily establish. And no, you can’t sweat out toxins in a sauna, either because of simple biology: “Humans sweat to cool ourselves, not to excrete waste products or clear toxic substances.”

The “Seqex is a Class 2 medical device, which means it can be used without a doctor administering it – similar to a sleep apnea machine.”

That doesn’t explain what the classification means. All medical devices need to be licensed in Canada.

Class categorization is a risk evaluation, not a determination of efficacy or wellness. In Canada, “Medical devices are classified into one of Classes I to IV by means of the classification rules set out in Schedule 1, where Class I represents the lowest risk and Class IV represents the highest risk.” A licence doesn’t mean it works as advertised; just that it meets labelling and safety standards: see Section 32.2 of the law. Licensing relies on the manufacturer’s attestation that it’s safe and meets these requirements:

END_OF_DOCUMENT_TOKEN_TO_BE_REPLACED

Conformity to nature has no connection whatever with right and wrong. The idea can never be fitly introduced into ethical discussions at all, except, occasionally and partially, into the question of degrees of culpability. To illustrate this point, let us consider the phrase by which the greatest intensity of condemnatory feeling is conveyed in connection with the idea of nature – the word “unnatural.” That a thing is unnatural, in any precise meaning which can be attached to the word, is no argument for its being blamable; since the most criminal actions are to a being like man not more unnatural than most of the virtues.