$322. That’s how much MORE the average consumer household using 750 kW/month pays a year when connected to Hydro One, compared to the same household connected to Collus PowerStream. That means YOU will pay that much more, thanks to Collingwood Council. The Block, in particular.

And it could be higher, if you have, say, electrical heat, air conditioning, electrical stove or dryer, or a family. A lot higher.*

This council has been in secret negotiations to sell our utility to Hydro One, knowing that your bills will skyrocket. Not only will it mean higher utility bills, but you have no input into the fate of the utility YOU own. Input is not being allowed by the Most Secretive Council Ever.

In fact, they have only ever discussed our utility and selling it behind closed doors this term. Dozens of times. Until last week, of course, when they publicly announced their plan to sell it. Anyone else see this as corruption and breach of public trust?

Last term, when half of our ownership in Collus was sold to PowerStream, it was all done in public, with public input. How quickly things changed under The Block.

If you’re a senior or otherwise living on a fixed income or with typically low wages, you’ll need to come up with at least $26.80 a month more, or you’ll have to cut it from somewhere else. Like your food. Medicine. Clothes. Or heating in winter.

Plus don’t forget to add in the entirely unnecessary but burdensome tax increases this council has already put through TWICE this term. All part of The Block’s war on seniors.

A recent email from Glen McAllister, Manager, Billing and Regulatory at Collus Powerstream, sent to his customers, graphically shows how better off consumers are with Collus PowerStream than selling out to Hydro One. At least $322 a year better.

This isn’t being shared with the public by The Block and its minions, of course. Sure, it is public information; they just don’t want you to have it.

But wait: it gets WORSE if you’re in business. Much worse.

So that’s The Block’s plan for local economic development? To attract businesses through higher taxes and higher utility bills. Brilliant. All part of The Block’s war on business.

Where do you think businesses and factories will look for savings to pay these additional costs? Right: salaries. They will cut back hours or even let people go. Jobs will be reduced or lost. All part of The Block’s war on the working class. Who needs jobs, anyway?

And this council has already paid out hundreds of thousands of your tax dollars in legal and consulting fees to accomplish all of this. So you, the taxpayer are paying to be flogged. And the flogging will continue until either morale improves, or the next election replaces this lot.

But take heart: council has TWICE given themselves a pay raise this term, and even gave Councillor ‘Senator’ Jeffrey and UNLIMITED expense account to wine and dine around the country pursuing personal political ambitions. Your taxes at work. 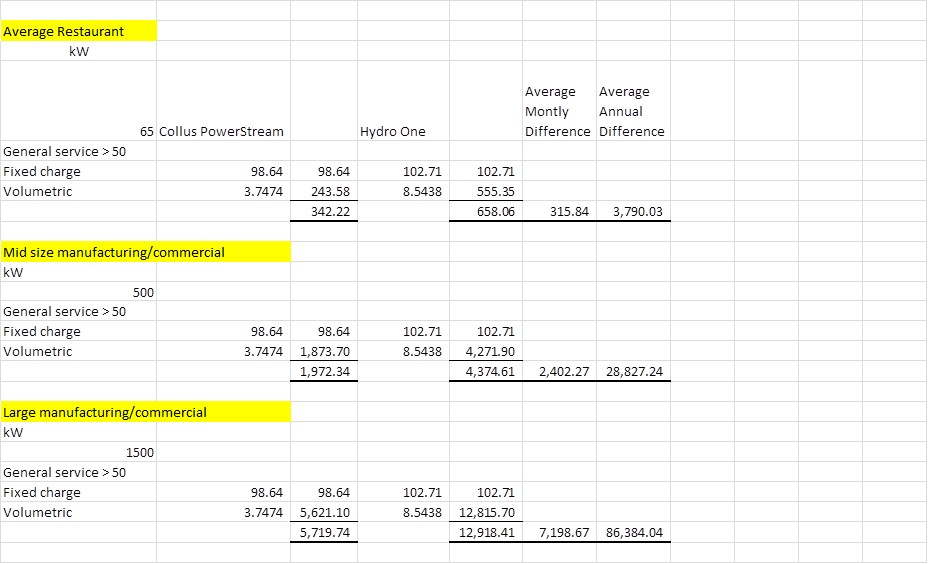 A “GS” account means ‘General Service” – this shows a non residential account whose electricity demand is under 50 kW will pay an average of $275 MORE under Hydro One.