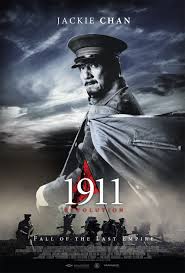 April, wrote T.S. Eliot in his remarkable poem, The Waste Land, is the “cruellest month.”* And not merely because of the inclement and unsettling weather that seems to mix winter with spring in unpredictable doses. Nor for the necessity of filing one’s taxes before month end, always a painful chore.

I started thinking about April while watching the movie, 1911, about the Chinese uprising against the Qing Dynasty, in 1911 (saw it this weekend). Fascinating period of Chinese history that led to the first republic under Sun Yat Sen, but, I wondered, was it so interesting elsewhere? Yes, it seems so.

April is a month rich in history, with memorable events, births and deaths galore. Memorable, however, is not always pleasant, of course.

April comes from the Latin Aprilis, a word of uncertain origin. For those who know the “ides of March” from Shakespeare’s Julius Caesar, you may be surprised to discover that the ides didn’t always fall on the 15th day of the month. In April, it falls on the 13th. The Roman calendar was a complex thing.

There were other significant historical events in Aprils past, including several I find interesting or significant:

Shakespeare and the Buddha in the same month: auspicious!

April is also a month of deaths, far too many to list here, including 2,224 people drowned when the the luxury liner Titanic sank (Apr 15, 1912), and 168 in the terrorist bombing in Oklahoma City (Apr 19, 1995). Here are a few of the people who died in April these past few centuries, whose lives interested me or affected my own in some manner:

So April is not necessarily Eliot’s “cruellest month”  and in fact is interesting, rich in history and gives rise to the delights of spring and the promise of warm summers ahead.

* What Eliot wrote in his first few lines of the poem was,

APRIL is the cruellest month, breeding
Lilacs out of the dead land, mixing
Memory and desire, stirring
Dull roots with spring rain.

It’s a wonderful poem and one you owe it to yourself to read if you have not, and to read again if it’s been a while since you last read it.