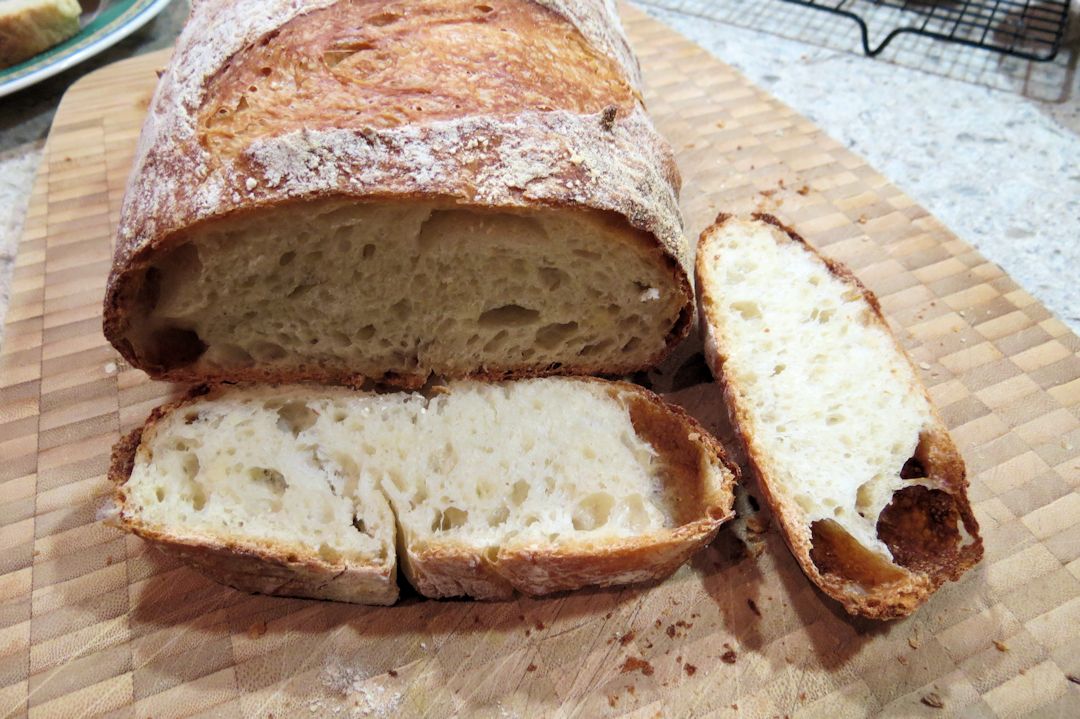 You gotta love breadmaking. It’s an opportunity to get the right and left hemispheres of the brain working together, not racing about in different directions like they do most times. The logical and the creative sides working in lockstep.

Bread making combines the logic of science with the freedom of expression in art. Well, that’s really true of all cooking, but it seems more evident in baking. You get your hands into the mix, with bread. It’s a visceral thing to do. Like pottery.

Breadmaking combines four sciences, too: physics, chemistry, biology and botany. They all come into play when baking. And, as I’ve said earlier, you also get a bit of animal husbandry in it – yeast is a domesticated animal you need to nourish, tend and encourage.

And then there’s the math: I’ve been working on my bakers’ percentages in the most recent recipes, trying to understand the various levels of hydration and relative amounts of ingredients.

Plus it takes creative skill: the ability to “read” the ingredients, the dough, the ambient room conditions for rising and fermenting.  You need to feel the dough, to test it, assess its condition by fell, sight and scent. Knowing how much salt is “just right.”

And, of course, it’s a distraction from the woes and cares of daily life, from the chitter chatter of politics and the media. Baking bread requires concentration, focus. It’s a very Buddhist thing to do. It clears the mind. 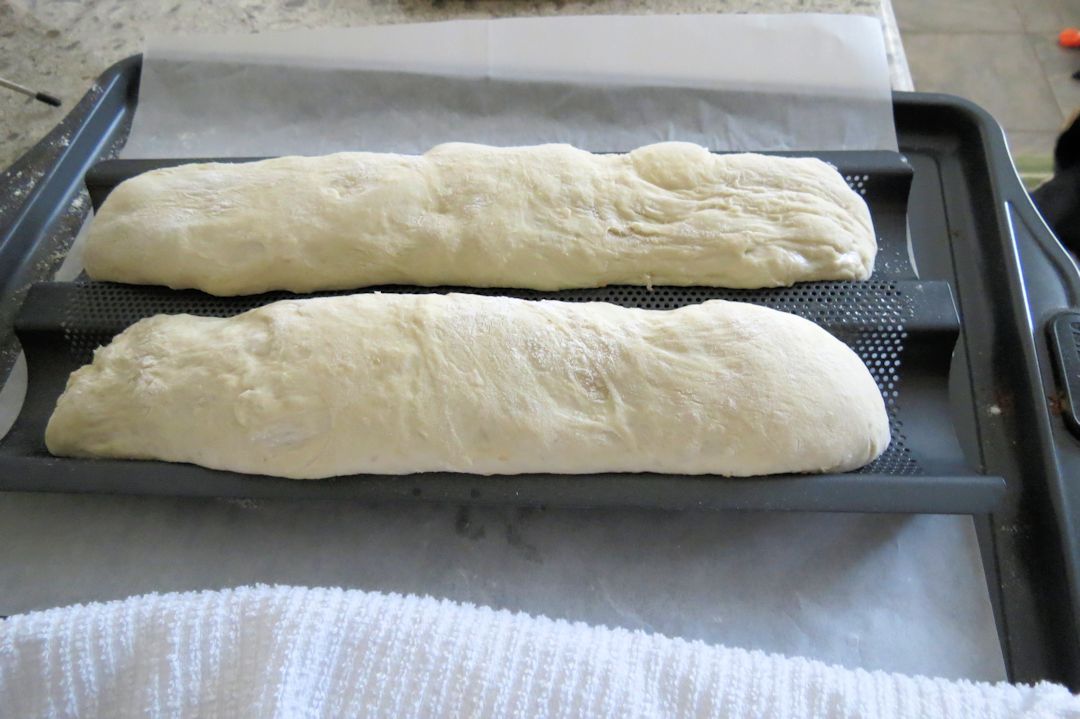 I started on some new – for me – ideas this past week: working with a preferment, in my case a poolish began the night before the baking. It really helps, I’ve found, at least with the current breads.

I started with a recipe for ciabatta on Breadcetera.com. I didn’t use it for ciabatta, however, but rather for baguettes (and a chance to try out my new baguette baking tray.

It also introduced a new technique to me:  folding the dough during the rise. This helps the gluten development (no gluten-free nonsense around here! In fact, the gluten-free food fad may be more unhealthy and worse for you!)

The result – my baguettes – was good, although I was a bit surprised at how much oven spring would affect them. They spread sideways, and joined in the centre. 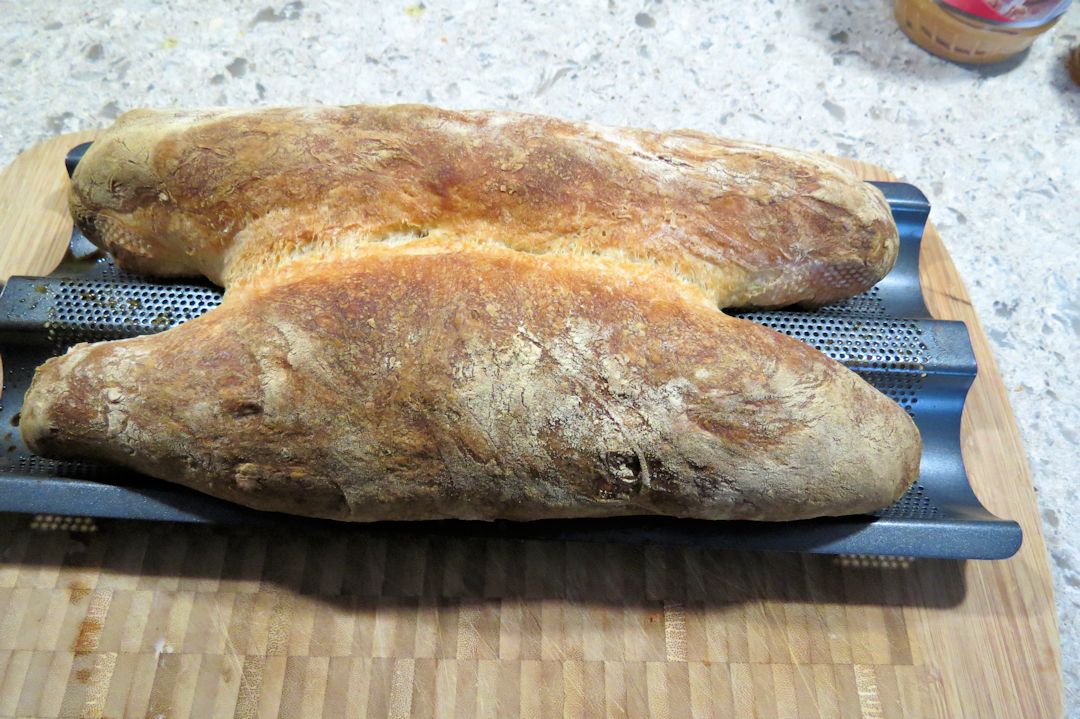 But all was not lost. They separated easily and proved to be good, tasty, a great thin-but-crunchy crust, and with a fair crumb, but not quite what I was hoping for (not enough aeration). Might need a little longer rising time.

And I forgot to slice the tops. Sigh.

I was excited by the result, however, and felt it was my rather lax approach to the technique that failed, rather than the recipe.

Besides, the baguettes dry out quickly and really need to be eaten the same day or the next; otherwise they’re stale. (They’re still good for dipping into soup, however, because they soften right up).

So I decided to use it to make a single, large loaf rather than baguettes. Something good for sandwiches or that staple in my diet: toast-and-peanut butter.

I went back to the recipe and made a second batch. This time I added a pinch of malted barley flour to the dry flour. I haven’t tried the diastatic malt powder in my recipes yet, but will do so soon. There’s an experiment brewing here and some research will follow soon: how much does malt affect rising and how much is needed?

I followed the double-hydration method, albeit I didn’t wait the full 30 minutes recommended. Might have to let the dough autolyse a bit longer next time. 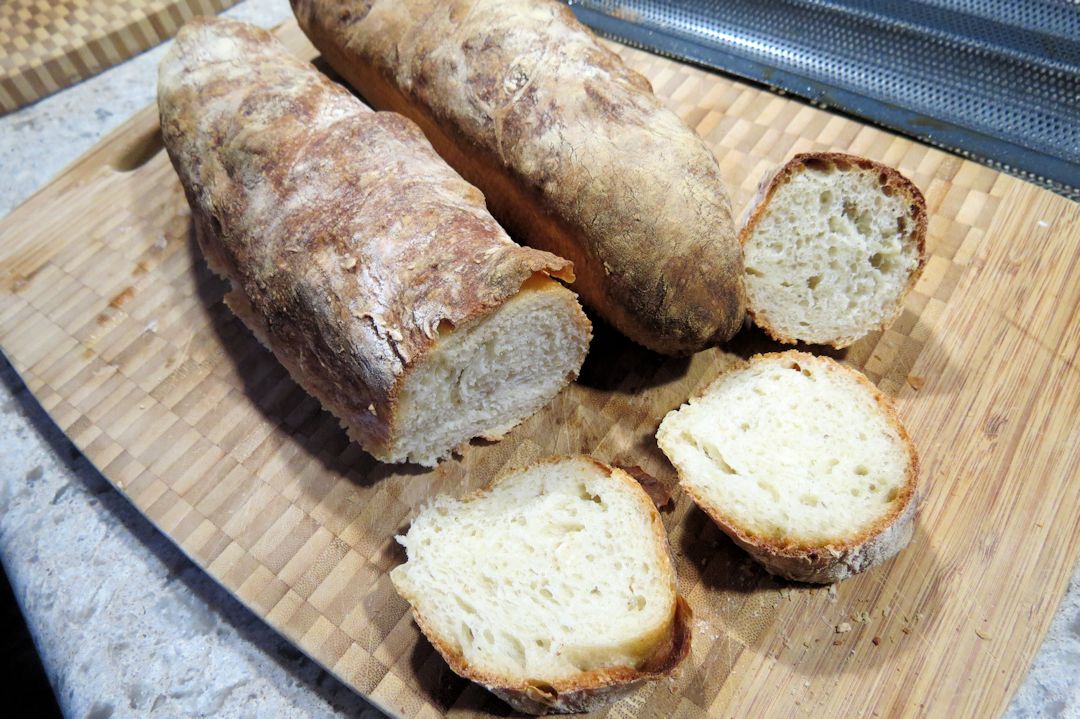 I folded the dough for a few minutes, both during mixing and while fermenting. I could really feel the gluten developing. This is probably something I can bring to the earlier  no-knead recipes, too, to help the crumb hold in the gases.

Because it’s a cool house, I let it rise longer than the recipe suggested (more like five hours rather than three). The dough retained the impressions of my fingers when I tested it.

I also put the bread under an inverted foil baking tray for the first 15 minutes in the oven, to capture some of the natural steam. I didn’t steam/mist the oven, although I had a tray with water in it while heating. Next time, I’ll mist the parchment paper before. I baked on a cookie sheet – next time I’ll use a baking stone.

I started the oven at 475F, but reduced it to 450 when I put the bread in (to compensate for the loss of heat when the oven is opened). 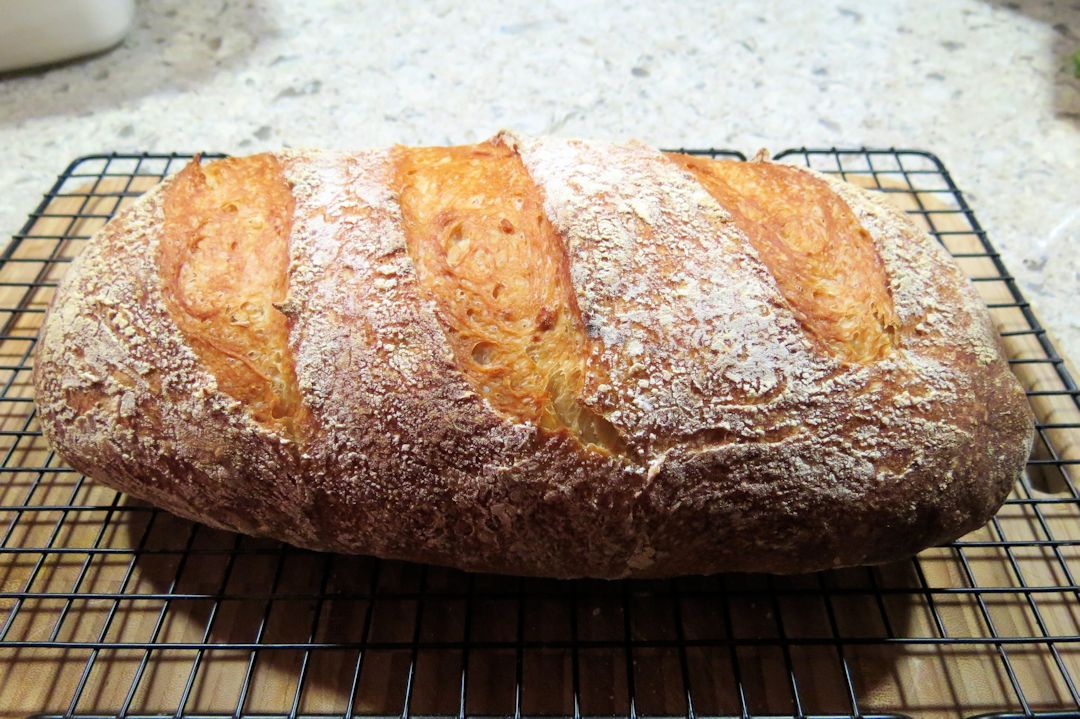 The result was superb. My best loaf yet. Nice, crisp crust not too thick, a good crumb with nice aeration and texture. Cooked perfectly throughout.

Visually stunning, as you can see.  Had some last night with soup (just after it cooled), and toasted some this morning. Lovely. I must make more of this, but using different ingredients  – wholewheat flour, spelt, rye, and others. That’s my weekend baking project: a new mix with the same recipe.*

* And a coconut bread. I want to experiment with coconut water in place of tap water, and shredded coconut in the mix. What sort of result will that bring? Plus I want to try a pumpkin-cranberry bread.