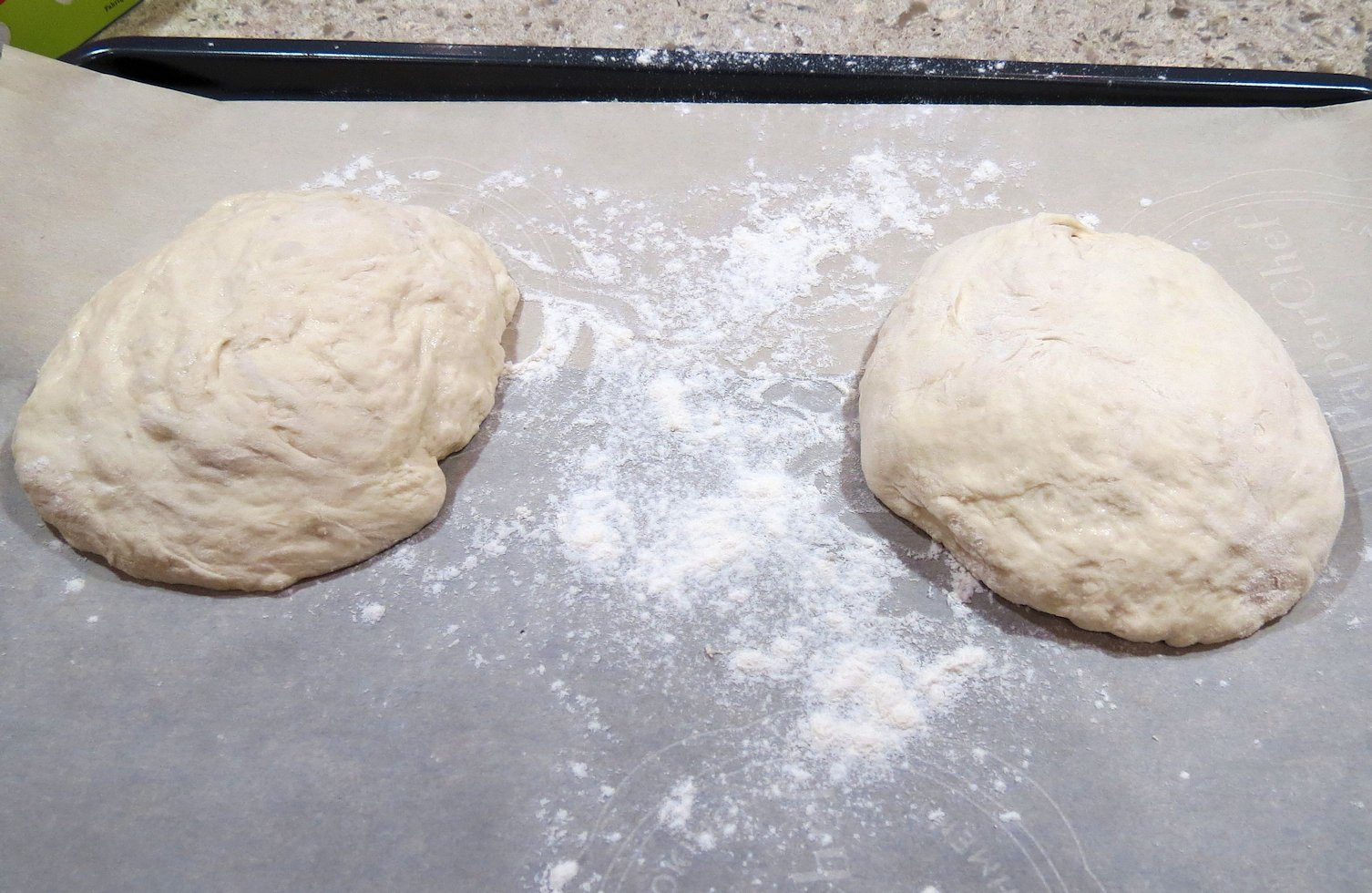 For all the reading, the reviewing and the researching for the best bread maker these past few days, it’s somewhat ironic that instead I turned back to the old-fashioned method and made a couple of loaves by hand, this morning.

Not perfect – I haven’t made bread these past twenty-odd years, and have forgotten the techniques and the tricks I knew back then. More time was needed for the rising, but I grew impatient, and unsure about the timing. Into the oven too soon.

But they are tasty nonetheless. Chewy, rich and delicious, especially warm. And reasonably light, but with a wonderfully leathery crust.

The smell of baking bread wafting up the stairs was enough to get Susan out of bed to come and enjoy a buttered slice with her morning tea. Dogs gathered around, sniffing for crumbs. It seemed like a moment out of some other, homier, domestic world. We talked about her aunt, who baked bread every day, in her small rural English village.

We have a different culture here in Canada (and the USA): convenience. Bakeries have for decades been almost a curiosity, an affectation, or an ethnic thing. They weren’t common in the suburbs, with its population of supermarkets and strip malls.

That may be changing – even big supermarket chains now offer in-store baked bread, buns, muffins, etc. But for the most part, they aren’t as good, at least in my experience, as those small bakery products.

Better, of course, that the majority of pre-packaged, sliced breads we casually buy: the loaves of replicated perfection and uniformity we put in the grocery cart week after week. Not always the healthiest choice, of course, but even these have getting better:

As recently as 15 years ago, 80 percent of bread sold in the U.S. was white bread.(1) Today, it’s a much different story. We’re buying more whole grain bread and less white, and in 2010, for the first time, sales of whole wheat bread surpassed that of white bread—$2.6 billion compared with $2.5 billion.(2) Thanks to education, availability, and improved labeling (like stamps and logos indicating healthier products), whole grains have become a top priority with consumers. 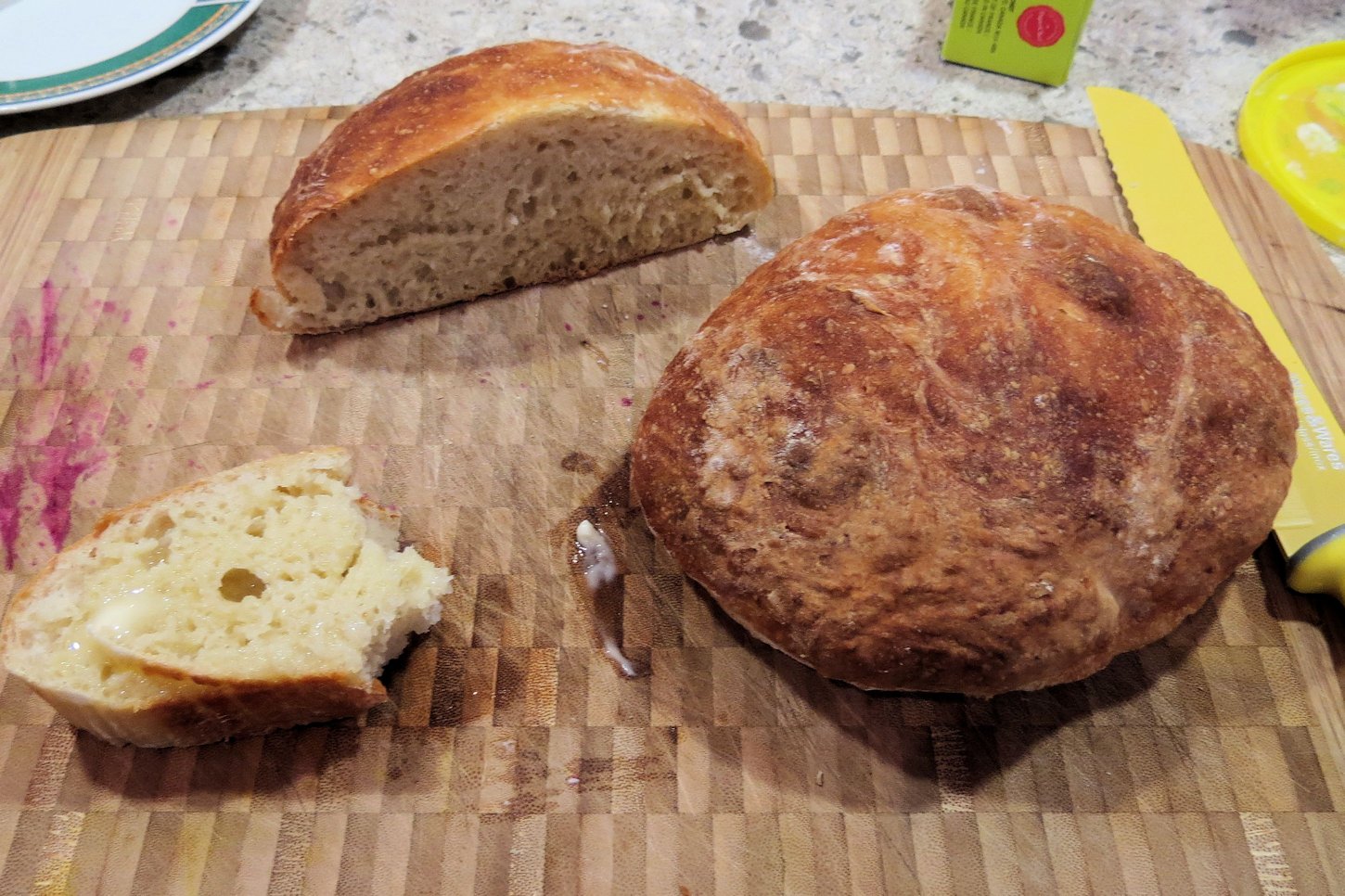 Don’t be fooled: many in-store breads aren’t really artisan. They come frozen, pre-mixed and read to shove into the oven. Like a fast food oputlet, where the “fresh” food arrives frozen and pre-cooked, merely heated in store.

Well, the bread dough still needs to be cooked, but the recipes are fixed, immutable and almost as perfect as the packaged stuff. The employees don’t do much more than feed the oven, then stuff the results into the appropriate bags.

However, I like it better than 95% of all packaged breads (Rudolph’s and Dimpflmeier’s breads are an exception…), but I don’t have the same attachment to these pseudo-artisan breads as I do those from a real bakery. They seem less authentic, but so do most big-store items.*

To be fair, some of the breads offered in stores are brought in from real bakeries (usually outside the region), places like Ace Bakeries. And some of these are great products, worth the $3-$4-$5-and-up a loaf. Some are pale imitations, overpriced and mediocre. It’s hit-and-miss (and I’ve tried many).

I’m of an age when I can remember the breadman and the milkman delivering door-to-door. That’s long gone. I don’t remember the breads, but I remember the milk bottles, with their funny necks that held the cream when it rose, so it could be poured off. The Fifties. So long ago. Back then, spongy, tasteless white bread was the pinnacle of modernity. Crusts were tossed into the trash. The miracles of science translated into the domestic life.

Fifty years later, we’re in our cultural time machine, seeking the traditional, the old-fashioned, the imperfect: hearkening back to days when things were done by hand, not machine. A simpler, less convoluted life. Before toxic social media, before vituperative, tantrum-prone bloggers and angry online environments. Before the Kardashians and Millie Cyrus and the Great Trivialization of culture. Back to a time of values and meaning.

In Mexico, we used to take a trip to the mercado every day or two to buy fresh ingredients for our lunch. We would buy bolillos – like light ciabatta buns – baked that morning at a local panaderia. We’d walk by them on our trips into town. The smell of the baking breads was heady stuff. And the bread was wonderful, too. Fresh, rich. It was an experience we loved: those fresh fruits and vegetables, the constant chatter in Spanish, the vendors, the crowds, the scents. And the breads (and those devilishly sweet churros…).

But, still I like the locally-made breads better. Pan de horno is good, but not as chewy, not a rustic as I prefer.

I don’t know when the trend started, but Ontario grocery stores started getting more varieties of bread. Used to be a choice of white or brown (whole wheat, which is seldom actually was). Maybe raisin or cinnamon bread, too. Rye was an exotic, something Old World, not great with peanut butter, either.

And what do you do with something like pumpernickel – dense, dark, thinly sliced and fragile? The supermarket and convenience store shelves were stocked with easily understood puffy white and brown breads. Nice rows of comforting, uniform packages.

These now appear to be on a sales decline. Food Business News suggests this may be widespread, not merely local:

SymphonyIRI data to be published in the next issue of Milling & Baking News indicate that the volume of bread sold in the last 52 weeks was down 4.5% from the year before, which is certainly the steepest one-year decline in the history of sliced bread. As a basis of comparison, declines during the nightmarish “Atkins years” were between 1% and 2% per year.

In addition to many factors identified as affecting demand such as the slack economy and gluten-free dieting, other prominent recent developments may be gaining traction as well. These include stepped-up warnings (and heightened consumer awareness) about bread’s role in obesity and about sodium in the diet, with bread fingered by the Centers for Disease Control and Prevention as the principal dietary source.

Consumers want other, different choices (gluten-free seems to be taking off but for the life of me, I can’t understand why someone without celiac disease would bother). We’re finally staring to pay attention to what we eat: reading the labels for salt, sugar and trans-fat content.

Or maybe we’re making more of our own. I can’t find figures for bread machine sales, but in my research this weekend, I’ve found there are not only many brands and models, but many outlets selling them. Someone’s buying them. Consumers may be going more DIY for bread, eschewing the store-bought stuff.

Seems like me, people long for breads of our collective  past, or perhaps the new cosmopolitanism (or age) makes people long for the unusual, the different, break away from the corporate culture and the mass consumerism: they want the stuff that identifies them as unique, as outstanding, as suave and sophisticated. Mom and dad’s spongy white bread doesn’t do that. A multigrain boule might.

All of which is great news for those of us who love bread (no gluten-free diet for me!). Except now I have the bug, I plant to make more of my own in future. All I need to do is resist the temptation when I walk through the baked goods section of the local supermarket next time. Instead I need to think about flours, yeasts and grains I can add to my own…

* The Centre for Science in the Public Interest has a great magazine called “Nutrition Action” that features superb articles on food and brands – no punches pulled. Here’s  the article from the 2008 spread on bread.