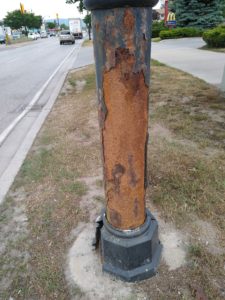 First Street was so attractive when it was first rebuilt, about 15 years ago: all new and shiny infrastructure. But since then, it has been basically neglected and the inevitable effects of snow, moisture, salt, sand, and pollution have played their role in corroding the once-proud, beautiful lampposts that line our highway through town.

Walk along First Street between Hurontario and High Streets. Look at the bases of lampposts on both sides of the street. They are rotting away and will likely collapse unless restored or replaced. And it needs to be done immediately. many of the collars at their base are cracked and broken, too. Some have access panels that are hanging loose.  There are so many of them that need attention!

What is the liability here, should they fall, or if a vehicle taps one and knocks it over? Are they more fragile now, due to the neglect? Has anyone done an assessment of their condition or are they simply being left to fall down when the rust eats through? 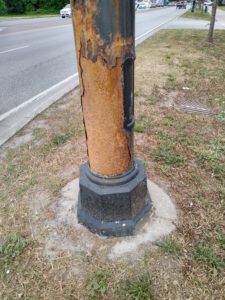 (And don’t get me started on the poor condition of the boulevard, with its dying, unkempt grass and unwatered trees, the accumulated sand, litter, and general neglect… you can’t even find a single public waste bin along the street although everyone knows about the litter and garbage customers at these fast-food joints leave on our streets…)

These eyesores are visual representations of our community’s failure to manage even basic needs, visible to every resident, visitor and those passing through. You can’t miss them — or the neglect they stand for. They are a highly visible embarrassment to Collingwood every time you walk or drive along this street. 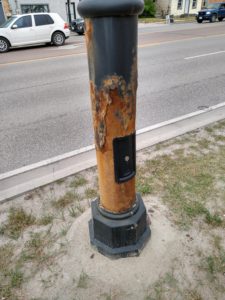 These lampposts show every day how our council have let the infrastructure in this town fall apart while they have been obsessed with lavishing our tax dollars on Saunderson’s Vindictive Judicial Inquiry (aka the SVJI)  instead of spending it where would be best used: on our infrastructure.

This is unacceptable neglect, but not surprising. Our mayor should be leading council to focus on what matters to the community, to the residents, but instead has been focused on his personal vendetta and his personal ambition to get out of his mayoral responsibilities and take a better-paying job as MPP in Toronto. There is no leadership at council, just fumbling and bumbling that has let this community decay and fall apart. Yet councillors naively continue to look to their Great Leader for the guidance he never provided. 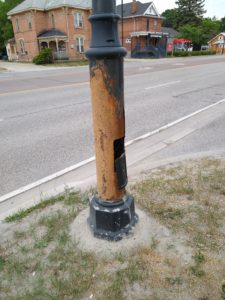 And it’s not just the lampposts that are evidence of council’s ineptitude and failure: the terminals remain untouched, costing what was estimated $500,000 more a year to restore every year they remain ignored. The waterfront remains undeveloped, despite master plans and promises.

The water plant was ignored for so many years that council’s neglect and ignorance created a “crisis” that led to a job-and-revenue-killing bylaw that ended all new construction for up to four years, and created animosity with neighbouring municipalities that depend on Collingwood’s water. Our streets decay, our sidewalks crumble. Local businesses have gone without help during the lockdown.

Our mayor has abandoned Collingwood while he works on his MPP election campaign. And this is the result. 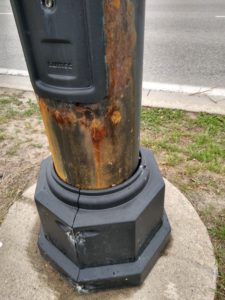 And meanwhile, council still can’t think its way out of the petty little box they have been in since the election: pursuing their Great Leader’s ambition to punish people who slighted him in 2012. They squabble among themselves, jockey for power, insult private citizens behind closed doors, and behave like five-year-olds who don’t want to take their nap.

These rotting lampposts are a metaphor for Mayor Saunderson’s inability to manage his elected role with even a pretense at concern for the community, and the otiose sycophanti on council who continue to enable him while ignoring their duty to the rest of the town.