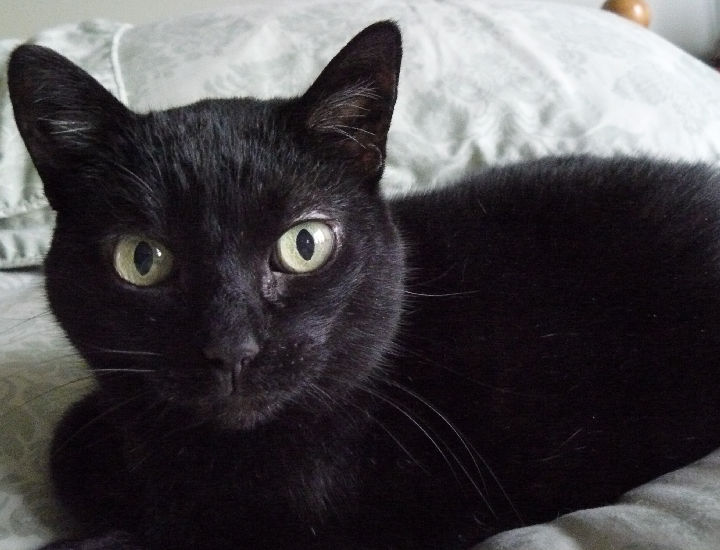 Cleo was an accidental member of the family. Twelve to fifteen years ago – long enough that the exact date is hazy in my mind – she came to us. Well, she was delivered, actually. And yesterday she left us.

One late winter day, back then, I was at home, getting ready to go to the shop, when a woman from the Georgian Bay Animal Rescue group showed up with a carrying case. We are in desperate need of some foster homes, she said. Short term, just until we find a more permanent home. It’s just one cat. She won’t be any bother. Can you help us?

What could I say but yes? We’ve always been a sucker for cats, and usually had three or four in the house – and had seen as many as seven living with us. All foster care, rescues, strays or adoptions.

Cleo, as we later called her, was a stumpy, compact little black female. She had been found up on Blue Mountain, under a porch, freezing in the snow and ice that bitterly cold winter. She had had a litter of kittens, which had all died in the cold. She was feral, but they had spayed her, vaccinated her. She was just a little shy, the woman added.

Little shy? She was terrified of humans. She darted out of the crate into the basement where she vanished. I didn’t even get a good look at her. We didn’t see her for weeks. We had other cats, and two dogs, so we couldn’t be sure if she was even eating the food we put out every day.

Finally, we started to get worried. A feral cat wouldn’t be house-smart, and might find her way into a wall, or somewhere she couldn’t escape. We were pretty sure she’d never even seen stairs before our home. Where was she?

We spent days hunting through the house, looking for her. And finally, as we grew increasingly frantic, I spotted a tiny bit of black sticking out from behind a CD case close to a wall. A stump of tail from a space I wouldn’t have thought big enough for a mouse, let alone a cat.

But there she was. Hiding.

Over the next few weeks, we sat by the case, talking to her, stroking her if anything protruded. And one day, she was turned around. We could stroke her head. Pet her tiny ears, reassure her. And one day she started to purr.

After that, it was easier. She slowly emerged, although in our presence she would vanish if we moved suddenly or stood up. It had to be on her terms. She began to be seen, moving about the house. We couldn’t reach out to her or – gods forbid – pick her up. But she would walk into a room where we were seated and stay nearby.

I can’t recall exactly when she decided we weren’t a threat, but she ended up sitting on the couch with us when we watched TV. We could pat and stroke her – with one hand only – any attempt to use both hands would make her dash into hiding again. Any time we stood up, she took off, too.

She was surprisingly calm around the dogs and other cats. She didn’t like them, and if they got too close she’d smack them, but it was nothing out of the ordinary for the household. No screaming, spitting, fur-flying fights. Cleo was calm, if skittish with the rest. Mostly she just ignored them.

The turning point came sometime in the second year (by then we realized she was not a foster cat). Cleo appeared in the bedroom as we lay in bed reading before lights-out. She clambered up onto the bed and climbed onto my chest, where she hunkered down to accept attention and, eventually sleep. She went from feral to furry barnacle.

For many years after that moment, Cleo slept on me every night. Usually on my chest, but if I turned over, she walked my body like a lumberjack walks a rolling log in a river, and would settle on my side. Purring. No matter how I might toss and turn, she would accommodate my movements and settle back down. 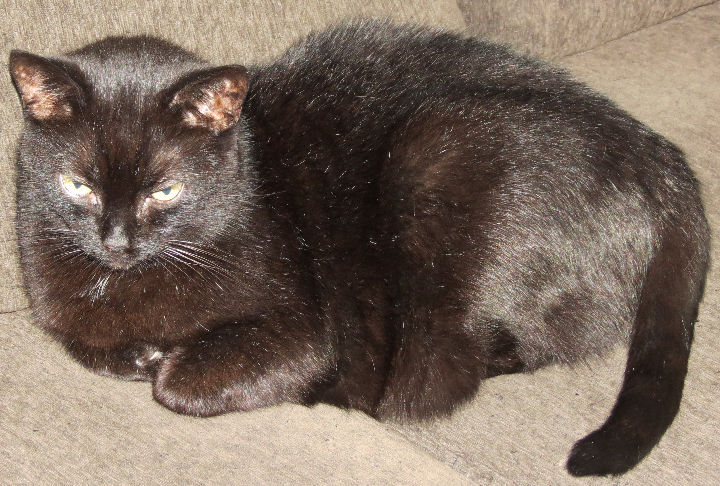 She never once tried to go outdoors. We let other cats out on a leash when we sit outside in summer, but Cleo was content to sit indoors where the sun shone through the glass. She loved the warmth. She would sit by the glass of the door, but had no interest in going past it. Maybe she remembered the cold and her lost kittens.

A decade and more went by, and we still couldn’t pick her up, couldn’t approach her with two outstretched hands. But she came to us and was happy for the attention, as long as it was on her terms. So much for the short-term foster care. She was ours from the moment I saw that stump of tail sticking out.

We never knew how old she was. Perhaps two or three when she arrived here. Maybe older. She never seemed to change or age. She ate modestly, didn’t care for the usual cat treats – although she could smell chicken from anywhere in the house and demanded some in a coarse, raspy voice. Plain, cooked, not with any sauce.  She was particular. No interest in fish, just chicken and maybe a little turkey.

She was quiet, affectionate with us, but aloof with strangers. She loved to be brushed, though. I remember when our friend Bill expressed surprise that Cleo had let him walk into a room without bolting, a few years after we got her. After a few more years, she let him pet her, too.

Sometimes – rarely – she would play with a cat toy. It always surprised us to see her suddenly pounce on a toy and skitter it across the floor. Then she’d walk away after only a short burst of activity. Mostly she liked to sit and sleep in the sun.

Perhaps a year ago we noticed she was changing. Her fur took on that rough look. Her back legs didn’t work well together and she went down stairs with them paired, bumping as they descended each stair. But she was eating, came up and down stairs, and slept on the bed as she always had. She got thinner, but was in no visible pain. Just old. She still purred like a little cement mixer when we petted her.

And finally, after all this time, she let us pick her up with two hands. That was the telltale sign for us: her time is coming near. We watched her, saw her getting weaker and slower, but I hoped she might make it to the fall, so she could enjoy the rest of the summer. She didn’t.

The last few months, we knew she wouldn’t last. She had trouble walking, and it increased, her back legs wobbling this way and that. She still climbed onto the couch when we watched movies, but couldn’t make it up the stairs to the bedroom at night. She slept in the kitchen near the water bowl and drank a lot more than before. Her bones became more prominent under her skin. She ate, but not much.

Rather surprisingly, in her last month or two, she discovered she liked the dry cat treats we have always fed  the others. She was demanding of them, coming into the kitchen to rasp loudly, asking for treats. We were bemused by this sudden change. But yesterday, that hoarse cry was not just for food. it was for comfort.

Yesterday, her back legs refused to hold her up and her front paws couldn’t take the strain so she collapsed onto the floor. She sniffed at the treats we offered, ate a few, but it was attention she wanted more. She couldn’t even sit upright. her tongue lolled out the side of her jaw. She purred when we petted her, though. That was a touching moment. Susan and I knew it was the end, but I think she knew, too. She lay there with her head against our hands, unable to rise.

We took her to the vet for the only visit she’d ever had there with us. She never struggled when we picked her up and carried her in. Her last minutes she didn’t have the strength to sit, let alone stand. She lay on a towel and let the vet give her the injection. It took seconds: her old, frail body unable to resist any longer. Her bright eyes dimmed and she was gone.

Cleo was a remarkable cat in many ways and we formed a powerful bond with her over the years. She gave us trust and we tried our best to deserve it, to give her all the attention and care she needed. She was independent, didn’t demand, she didn’t make much noise or fuss or fight with the other animals. Maybe she was grateful for having a warm, safe home at last.

We never managed to get many photographs of her. When approached by a camera, she almost always darted off. A few pictures snapped from a distance is all we have.

She will be missed. I will miss the presence of her on my bed this winter, her tiny warmth and rattling purr whenever I reached out to her in the dark. I will miss the stumpy cascade of footpads going up and down the stairs and having her sit between us on the couch while we eat our meals.  And I will miss her raspy voice greeting me.

Sometimes it’s hard to have pets, to deal with their shorter lives and their mortality. All that love, companionship, their constant presence, seems to be gone so quickly. Sudden they go from playing with you to lying in your arms one last time. It is heartbreaking. But Cleo had a good life here, as all of our pets have had. We don’t regret a minute of having her company and I believe she didn’t either.