Last year I decided to start making my own pasta. Seems a natural extension of my bread making. But it took several months before I could get started, what with personal issues and, of course, the holiday season interfering. This week I finally took the step.

As usual with me, I did a lot of online research and reading before I took the first step. I looked at many reviews of pasta makers, as well as read techniques and recipes from hundreds of sites and several of my cookbooks.

I wanted a manual pasta maker, although I know that you can make your own pasta without a machine, just a dough cutter and a rolling pin. That requires a lot of rolling, folding and cutting, and I simply don’t have the patience or the skill. The result is never consistent, either. I chose manual in part because the price of a motorized/electric machine is rather too high to justify for something I expect to use at most once a week, and usually for just the two of us.

There are a lot of pasta makers on the market, and a lot of accessories for food processors. Despite the number of brands, most look and operate essentially the same. For manual machines, the options are in the available width settings and the types of pasta you can create (through interchangeable cutting heads).

Some types of pasta can be made manually after rolling, using the flat sheets of dough and cutting it into shapes.

Basically a pasta machine does two things: it rolls/flattens the dough, and then it cuts it into strips or shapes. It’s pretty simple, and one person can do it alone. 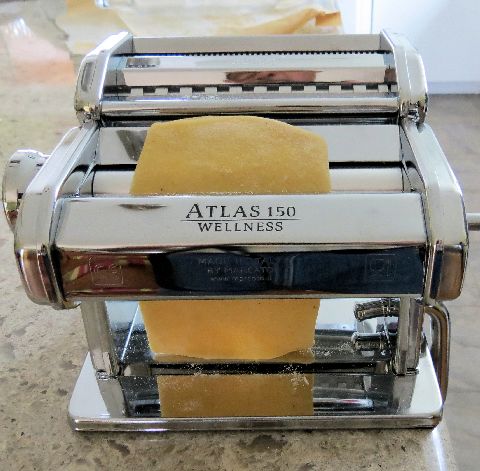 The Marcato Atlas pasta machines are rated most highly pretty much everywhere, although the basic model only makes three different types of pasta (and, of course, flat sheet): fettuccine, spaghetti and tagliolini. There are add-on accessories you can buy to make ravioli and raviolini, pappardelle (for lasagna), vermicelli, capelli d’angelo, and perhaps others. I just got the basic machine (for now).

These are Italian-made machines, not Chinese. While the Chinese can make some good products (and are getting better), a lot of their output still isn’t up to the quality of North American or European products. They simply don’t have the quality control at most Chinese factories, nor do they always use the best metals or woods.

The price for the Atlas is higher than most of the others, but the product is simply rated better on every site I tracked. You get what you pay for. from what I can see, it’s well made and certainly feels heavier than any of the knock-offs I examined.

The basic machine is the 150 – named for its 150mm roller width. There is a more expensive, wider 180 model. I chose the 150. It arrived in perfect condition earlier this week and worked as expected from the first turn of the crank. It’s an attractive device, but care has to be taken to clean it properly (gently, with a brush and not soap-and-water…) 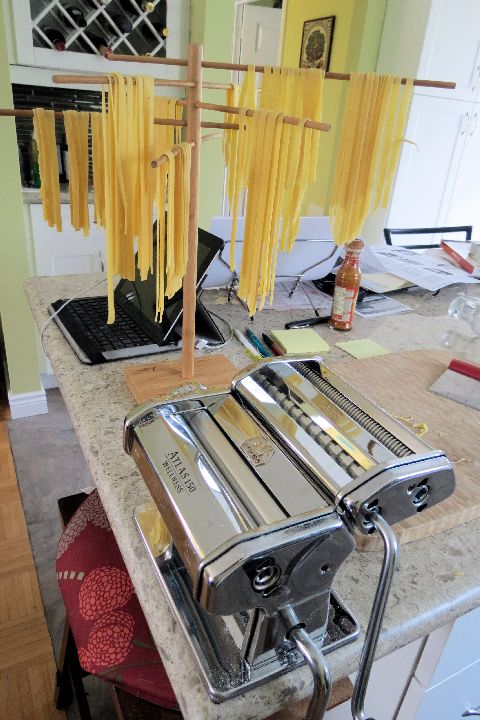 I could only find one pasta machine sold locally; an unknown brand, a knockoff made in China. I checked a kitchen supply store in Barrie, and they had two models – both Chinese made; one, however, was packaged by a well-known European manufacturer, so it might be better than the unknown brand. No one sold Atlas locally, so I resorted to a Canadian seller on Amazon.

Dry pasta – the sort we usually use for dinner – is made from durum semolina flour and water. It’s convenient and has a dense texture, but it isn’t the most flavourful. Nor can one ever know the quality of the ingredients that went into it.

Fresh pasta can be made of wheat flour, a mix of wheat and semolina, or semolina alone, and often includes eggs and sometimes spices or other ingredients.

Flour makes a smoother pasta, but the coarse semolina also helps the sauce stick to the pasta. The range or recipes for all these combinations is quite large – which one is best?

I found an excellent essay on pasta making by Niki Achitoff-Gray, on Seriouseats.com, called The Science of the Best Fresh Pasta. In it, Achitoff-Gray goes through her own experiences and experiments making a variety of pastas using different ingredients and even illustrates her results with colour photographs. It’s a terrific read for cooks or anyone interested in making pasta. It also identifies issues with making pasta that anyone doing it will soon encounter.

I also read and printed out at least a dozen recipes, trying to find some common elements in them. Some were based on weight, others measured by volume. It can get confusing trying to compare cups to grams. In the end, I went back to Achitoff-Gray for the basic recipe, because she explained her reasons behind it. Then, as is my wont, I tweaked it. 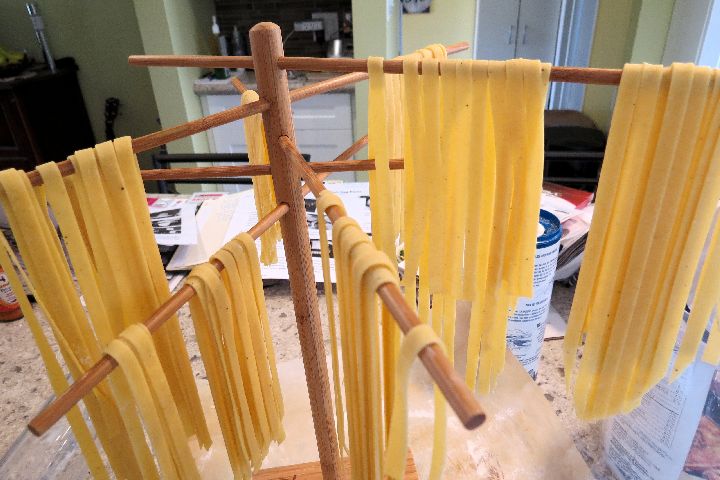 Here’s what I used for my first batch (serves two):

I pretty much followed Achitoff-Gray’s techniques after that: forming the dough, kneading, resting (30 mins), rolling and cutting. I suspect I should have let the dough rest for an hour, however, but the difference might be minimal.

The result you can see on the drying rack, in the photo: nice texture, nice colour. The dough was run through the pasta machine several times until I reached the desired elasticity and thickness for fettucine (the 5 setting, as recommended in the manual) before drying (for about two hours).

A couple of changes I will make for the future: increase the proportion of semolina to flour (from the 1-4 to 1-3 ratio). Perhaps I will try to find a finer-milled, high-protein flour as well (AP flour works very well, but traditional fresh Italian pasta is made with a finer-milled product). I may also experiment adding extra gluten to the recipe, and even mixing soy or other flours into it.

And what would the result be if I added a little buttermilk powder to the mix? Or very finely-chopped sundried tomatoes? Several things to look forward to.

The result was cooked (boiled) for about three minutes in unsalted water – a trifle longer than necessary but some of the noodles had stuck together, making a laminate of three or four noodles, so more cooking was required. Next time, I have to make sure the noodles don’t overlap, but lie flat on the drying rack to avoid having to cook them so long.

You can, of course, cook the pasta right away and not dry it, however, most of the recipes suggest doing so. I suspect the drying helps reduce any water so the noodles stay intact during cooking better.

I need to develop a technique for getting the cut noodles onto the arms of the drying rack smoothly, without any overlapping.

Another tip I have to remember: cut the final dough sheet to the desired length before slicing it, and save any extra bits from the sheets to mix together in a final batch. I like noodles about 8″ (20cm), but the length is up to you and your eating style. Having noodles of roughly similar lengths is just easier to eat.

The result: good, modestly tasty, nice mouth feel, but not exceptional. Yet – I still have some tinkering to do. One of those experiments will include adding a little salt to the cooking water, which I don’t normally do (see note above), but will apparently improve the texture of the pasta in the cooking. We use sea salt for the very little we cook with because I don’t want the extra chemicals added to table salt in my food.

And finally: for the best result in any pasta, don’t serve the sauce on the noodles. Put the noodles into the sauce and cook them together for a final minute or two. (and maybe adding some cooking water to the sauce?)

Overall, making your own pasta is a reasonably easy thing to do, although it takes a little time and there are many steps involved, so you need to plan and prepare ahead. Is it worth the investment and time to get a quality food, with good ingredients and extra flavour? Of course.

“There are two ways of fighting: one by the law, the other by force; the first method is natural to men, the second to beasts; but because the first is frequently inadequate, it is necessary to resort to the second. Therefore it is necessary for a prince to understand how to make use of both the nature of the beast and the nature of man… one cannot prevail without the other.”