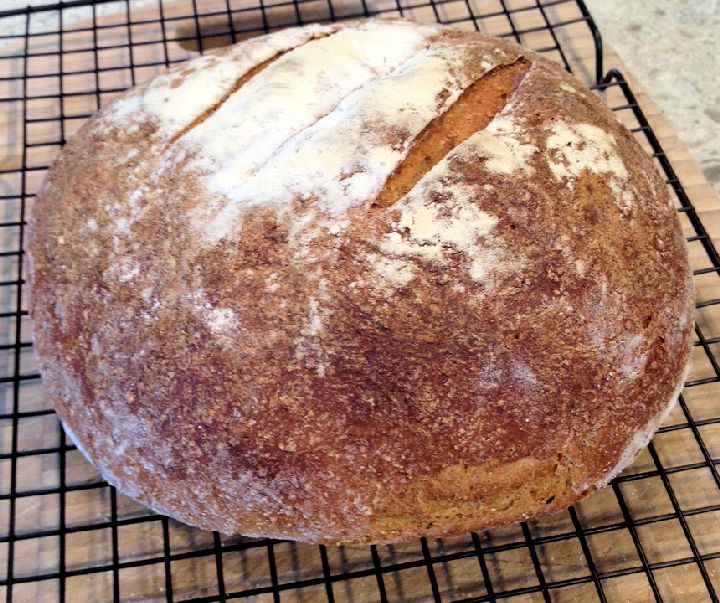 So far this month, I’ve made two loaves and one batch of pasta. But the month is barely started, so I have lots of time to make more. The breads so far were nothing spectacular – acceptable, reasonably tasty, but hardly exciting. I’ve made better. The pasta on the other hand, is getting quite good and I look forward to making more.

The first loaf I made in the first few days of this month was a simple boule, made with a tweaked no-knead recipe.

I used unbleached flour, corn meal, and a bit of rye flour and whole wheat. I also added some buttermilk powder, a little agave syrup and a tablespoon or so of hemp hearts. I recall I may have also added a teaspoon of gluten powder, but I didn’t record it in my notebook, so i can’t say for sure that I did. 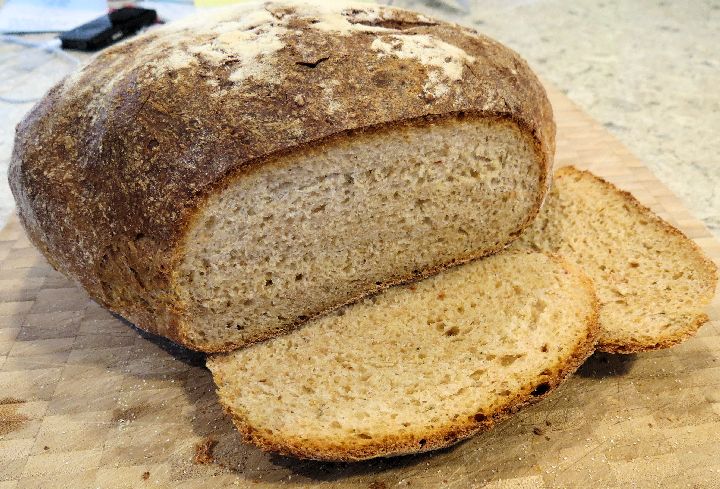 Overall, it was a fair bread, with a good crust, but a bit of a dense crumb. That might have been from leaving it to rise overnight, and having it fall a bit. I probably should have kneaded it and let it rise again before baking, but I hoped the oven spring would bump it up more than it did.

In taste, it was okay; good for soup, but the density wasn’t great for toasting because the heat didn’t penetrate the thick, dense slices very well. The slightly golden colour is a combination of the unbleached flour and cornmeal. Crust was okay, too.

I think that when you vary from the basic AP or unbleached white flour by adding other types, the dough really deserves to be kneaded, so that may be why these no-knead recipes don’t work as well for me.  Or perhaps I should have stuck it in the fridge overnight and let it warm and rise the next day, to avoid the collapse.

And I’ll forego the hemp hearts next time since they didn’t seem to add to the bread, but may have given it a slightly bitter taste. Ah, well… 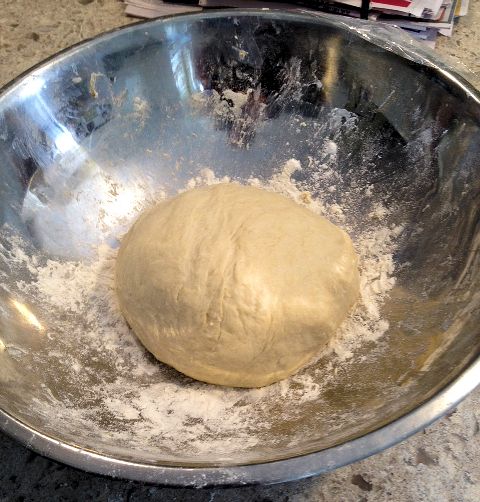 Bread two, made late last week after I made the pasta, was a basic, kneaded batard, using mostly unbleached white flour, with again some added cornmeal and steel-cut oats for texture. I also substituted about 1/2 cup of all-purpose (bleached) bread flour for the unbleached because I was running low on the latter.

This one got the proper kneading: about 10 minutes after it had rested at the start, then again an hour or so later, and again around the two-hour mark. Build up those lovely gluten chains, it does. Might even do more next time. It rose only for a few hours during the day.

And kneading gives me a chance to stand up from the computer, put on an audio book and listen to a story for a chapter or two. It’s quite relaxing. 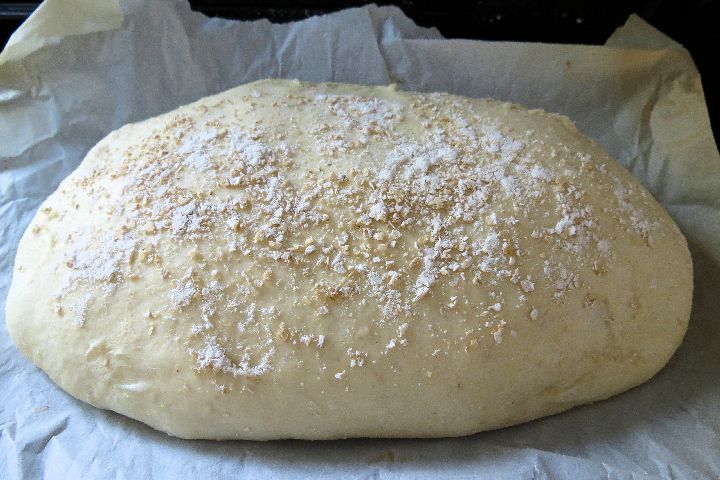 The result of the kneading was that the final rise was quite lovely and the dough held its shape well. As you can see from the above photo, the dough expanded quite nicely in size to a proper loaf shape.

I was quite pleased with its growth during the rising, but I think in future, I will flip the dough upside down for an hour or so at the end, to allow some of the gases to migrate to the other side as well.  You can see I’ve sprinkled the top with some oats and flour, too. 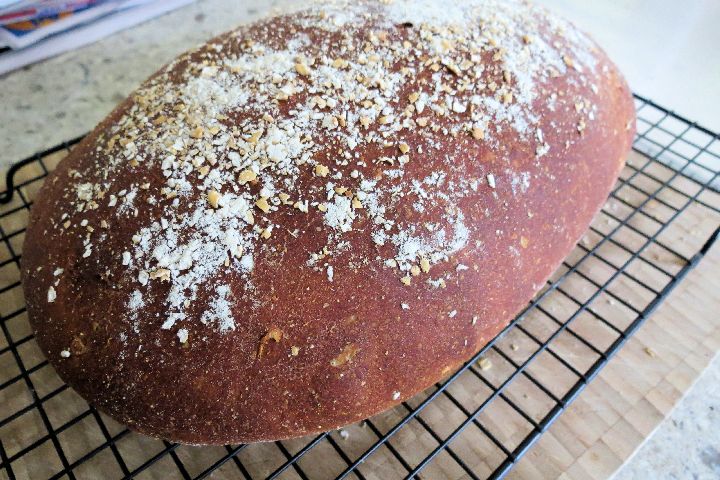 As you can also see by the photo immediately to the right, it turned out well: nicely browned, although the oven spring was a bit less than I had hoped for – the batard being pretty much the same size as the dough in the above photo. But it’s a good size – although I might try to bake it in a pan next time just to regularize the shape.

I also threw in the remains of the chopped sundried tomatoes that I had leftover from the pasta dough (see below). Overall, these didn’t make any significant difference to the flavour or the colour. You can’t even see them in the bread crumb. I am tempted to try adding tomato paste to the dough, next time. 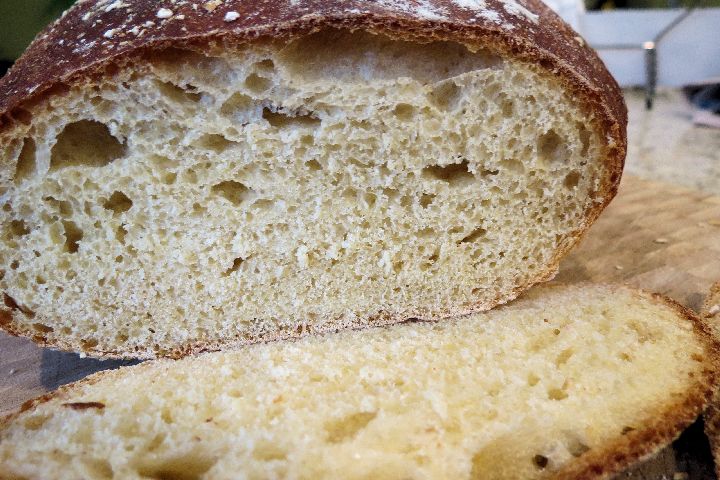 The taste and texture were quite good, too; a really good bread for soup because it holds up well in the hot liquid (we ate more than half the loaf this weekend already!).

The crust, too, was thick and chewy but not uncomfortably so and has retained a bit of its spring even when stored in a paper bag. The bottom part of the baked loaf was a tiny bit denser than I really wanted, but not underdone after baking and not overly chewy. Again, turning the dough over during the rise might help spread the gases around a bit more evenly.

The pasta I made last week was only my second batch, but was surprisingly good. I’ve really enjoyed the learning process and look forward to making more. 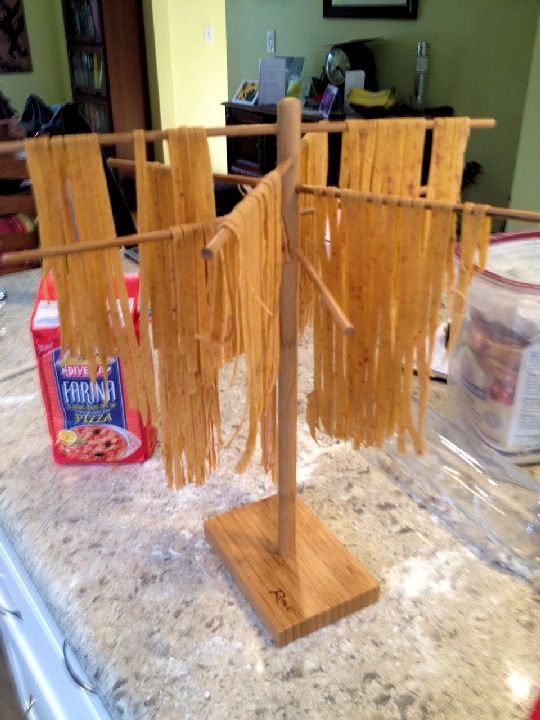 I started by tweaking the mix of materials I had first used to go into the dough. I increased somewhat the percentage of semolina. I’m still experimenting for the perfect recipe.

I also replaced some of the unbleached white flour with some finely-ground Tipo 00 Italian flour (see lower left of photo). As far as I know, this flour can only be found locally at the Fresco store in the west end mall. It’s a small bag in the international foods section. Aside from the grind, it really isn’t different from other AP flours.

I also added some finely-chopped sundried tomatoes to the mix – not the bottled kind in oil, but the dried kind; chopped by hand for some time to get the pieces small enough. While adding a bit more flavour and colour to the noodles, larger pieces tend to make the dough tear when cut, so you have to be careful to make sure they are very fine. You can see the little red flecks in the noodles in the photo.

Next time I think I’ll try adding tomato paste instead of the tomato pieces, because I can compensate for the extra moisture by adding flour. I did a lot of kneading on the dough before rolling and cutting it, but I suspect when you add ingredients, you may also have to extend the kneading time to be sure the gluten chains form properly.

I also tried to be sure the strips of drying pasta didn’t overlap so as to form thick pieces that ended up incompletely cooked.

The pasta was boiled, then added to the warm sauce as is the proper manner, and simmered with it for a short time. The result: buonissimo! A lovely taste and texture. This time, by the way, I salted the water and it seems to have helped the pasta retain its consistency during the boil.

I intend to try using 100% tipo 00 flour or 100% semolina in future to see how these flours affect the resulting pasta so I can gauge the best mix. And to try adding other ingredients like pureed beets and spinach, squid ink and more.

I also wonder whether adding gluten powder to the pasta dough might help bind it when you add ingredients. None of that no-gluten nonsense fad in this house!

One Reply to “May’s Breads and Pasta: 1”

“Mercenaries …are useless and dangerous… valiant before friends, but cowardly before enemies… in peace one is robbed by them, and in war by the enemy.…”