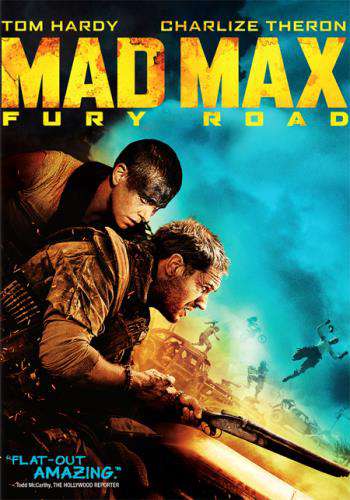 The latest Mad Max movie isn’t so much about Max as it is about the political-feminist message of the film. Max himself seems somewhat perturbed, sometimes cross, but not really mad in the sense of going berserk. Mildly angry most of the time. Grumpy Max.

Not like the original, fast-quipping, fast-shooting, troubled character played by Mel Gibson in the B-flick that went viral back in the late 1970s. The new Max is more phlegmatic. And not nearly as good a shot. Despite some great effects and photography, Mad Max: Fury Road doesn’t hold a candle to the originals, mostly because of the thin characters.

Well, Mel Gibson is too old to reprise the role, and his subsequent anti-Semitic outbursts and rabid, fundamentalist Christianity have put him into the “no-film” zone for Hollywood these days. Or at least relegating him to modest roles in films of great mediocrity. But as the original Max, he was pretty damned good in the first three films of the franchise.

Mad Max was a story about a loner trying to survive in a dystopian, post-apocalyptic world. Sort of like the Conan series of films, set a few millennia in the future, with guns instead of swords. It was a wild, exciting, scary place.

The new Mad Max is set in an even harsher version of that world, but one that begs more explanation. And the plot is thinner than a corn tortilla.

The two-hour film spends most of its time driving without much purpose other than to keep moving (and then when they get to nowhere, they turn around and do it all over again in the other direction…). A much bigger chunk of that time could have been spent explaining the background stories. Or making us empathize with the characters even a little. Of all of them, I only felt something towards the bad-guy-turned-good, and he’s only likable in less than half the film.

What’s with the white-skinned guys? The silver paint sprayed in their mouths? The blood? The weird costumes the leader wears? It’s creepy and violent, and well designed, but illogical. It’s like someone gathered together a bunch of futuristic tropes and threw in some chase scenes. You can perhaps guess what it means, but it’s never really made clear.

The first Mad Max is actually a typical cop-gang-revenge story that could have just as easily be set in LA or Frisco or San Diego instead of the futuristic Australian outback. It could also have been set in an ancient era (a la Conan). Max is driven by his desire for revenge for the murder of his wife and child. The audience cheers for him. It’s a great stunt film, too.

The audience of the new film is merely a spectator along for the drive. You sort of want the party to escape, but you’re not emotionally or intellectually invested in any of them. When one of them dies en route, it’s an “oh, well…” moment. Another cardboard character dies. Even the baddies are cardboard. And Max? well, he’s just there.

The new Max is a quiet type, hardly speaking through the film, and not as nattily dressed in leathers as was Mel. In fact, he’s rather shabby and mumbles a lot. Scruffy Max isn’t as appealing as Mel’s sleek leathery guy.

What he’s doing in the outback is never made clear. His reluctant companion – the woman trying to drive her female companions (sex slaves it seems) to freedom has a much bigger, much more vocal role. And while dressed in bikini-like costumes apparently cribbed from a 1960s’ James Bond film, these harem girls are not the kick-ass women of, say, Tarantino’s films. More like ambivalent, fatalists who finally figure out how to pull a trigger.

Charlize Theron, playing Furiosa, has much more to do than Max. In fact, the film should be named Mad Furiosa, not Max. She’s supposed to be the human touch, I suppose, but she’s almost as close-mouthed and guarded as Max, so it’s hard to get more than a grudging respect for her.

The criminal black market for oil (and gasoline) that dominates the first film is barely a background issue in the new; it’s more about water. But even then it’s so downplayed that you might miss the significance.

The film is mostly shot in the cab of a truck racing across the sand. But who are all these baddies chasing them? We never get to know who they are or what they represent or even why they’re all out there. Sure, we know the Big Baddie wants his harem back and one is carrying his kid, but the rest? Why do they care? Are these groups allies? Cohorts? Do they come from the same place or different citadels? Why are they all male?

In an age of alleged oil scarcity, they all seem to have enough fuel in small vehicles to travel hundreds of kilometers to nowhere, and then back again. Why don’t they ever need to fill up? Why don’t any ever run out of gas?

And how come they blow up a critical rock arch in a canyon on the way out of Dodge to keep the gangs from following, but when they some back through that spot, it’s all cleared away and they have to blow it up again? Where did the rocks and rubble go?

There’s no fun in the film. There’s no wisecracking, wacky moments. No Tina Turner to create a sort of sexy comic relief. There’s no Mel Gibson, not even a Bruce Campbell in it. Okay, there’s a heavy metal guitarist whose guitar is also a flamethrower, but he’s really just incidental. Not worth more than a modest guffaw.

And the ending… it’s like someone told the director, “Okay, let’s wrap it up now…” and they just brought the curtain down. So much is left unsaid, unexplained, unrevealed.

Oh, and that feminist message I mentioned earlier? The sex-trade, harem-girls, the patriarchy… that dichotomy of men: bad and violent – women:good and resourceful kind of seeps through the film without being properly developed. It could have been a more powerful spine for the events, but it’s rather flaccid.

By now you realize I don’t think much of the film. In fact, I don’t even think it’s a good B-flick and I really like (and collect) B-films. It’s selling for $8 at WalMart but I recommend you wait until it reaches the $5 bin, before buying it. It will only end up in the yard sale later. Or see it on your streaming channel of choice. Better yet, use the $8 to buy a scifi novel at your local used book store: you’ll get a lot more from the reading.