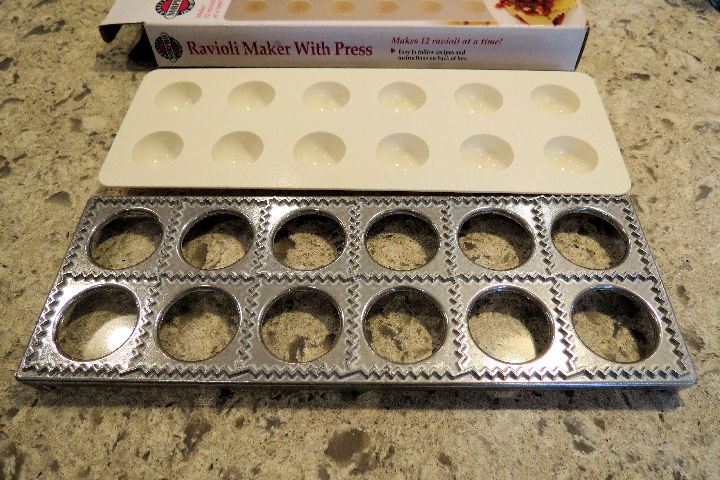 My first attempt at ravioli was, I admit, a disaster. But you learn from trying what you need to do the next time. And you also learn from reading what tools you might need to do better. Sure, you can make ravioli and other stuffed pasta by hand, but what I wanted was a plaque. That’s the one I bought in the photo on the right. Simple, inexpensive and easy to use.

A plaque is a die for making ravioli. It has a metal base, 12 holes, with ridged borders around each, and holes. It also comes with a plastic press. A plaque is great for making symmetrical ravioli. 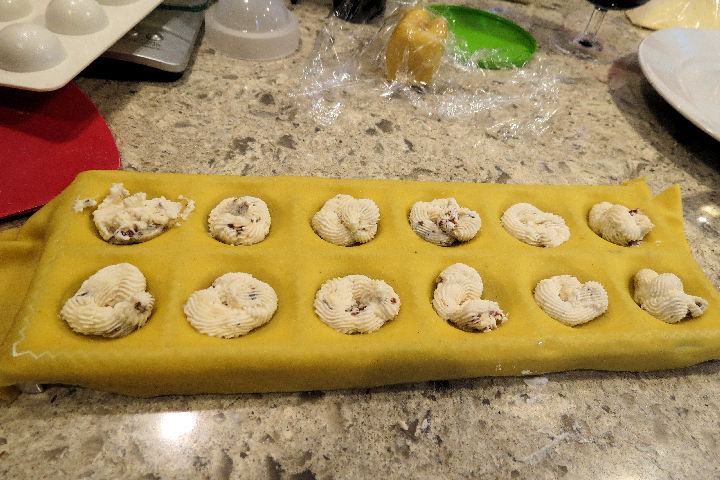 The process is relatively straightforward: make your pasta and roll it into a sheet wide enough to lay over the lightly-floured plaque with some on either side. I rolled it out to setting seven (7), which was thin enough so it would cook quickly, but thick enough to be bent into shape when the press is applied. You don’t want the bottom layer of dough too thin or it will tear, but I could have rolled the top layer at 8. Next time I’ll try it.

Gently push the press onto the dough so it creates the indentations, then remove it. Fill with your choice of ingredients (I used Ricotta cheese and finely-chopped sundried tomato). Use a spoon to smooth it into the indentations as necessary. Lay another sheet of dough on top, then use a rolling pin to press the top sheet flat. The ridges on the plaque poke through the dough. Turn it over and tap out the individual ravioli. If you’ve rolled it properly, each piece will separate cleanly. 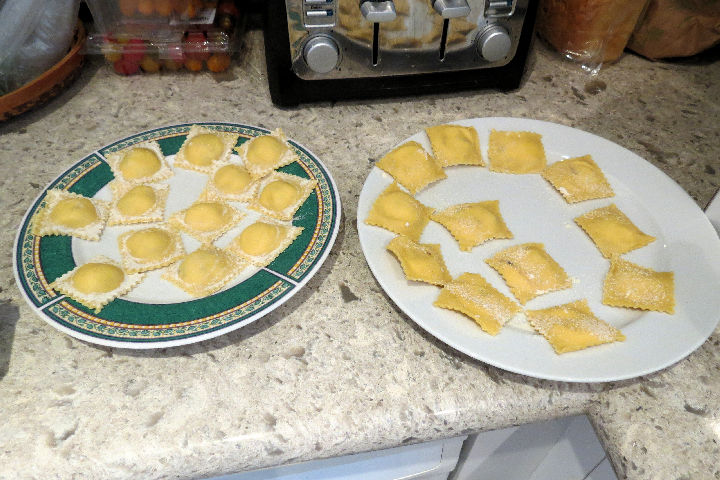 These I set aside on a lightly floured plate to dry for a few minutes. This time I made sure the filling was not very moist, although I need to cut the sundried tomato even finer in future because longer pieces can clog the pastry sleeve I used to fill the indentations. Or perhaps sprinkle them on after the cheese has been squirted in.

And don’t overlook the flouring for the plaque or the plates – otherwise the dough sticks. Try to avoid stacking them on one another, too.

Some cookbooks suggest lightly misting the dough before applying the top layer, but I didn’t find it necessary. If you’re making a larger batch, the dough could dry out more than it did for my small amount (24 pieces made from my usual 140g recipe), and then it might be necessary. 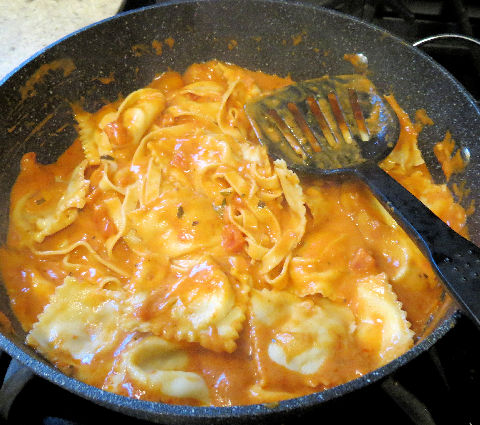 The rest is simple: boil up a big pot of water, sprinkle in some salt to improve the gluten bonds, and toss in the pasta.

Cooking with Ricotta cheese is a bit tricky. You need to boil the pasta long enough for the dough to cook thoroughly (it’s got two layers) but retain some texture, but not long enough for the cheese to curdle. Good luck… I found it took about five-six minutes.

Then remove the pasta from the water and add it to the simmering sauce (I used a light rose cream sauce with added mushroom and onion). Cook them together for several more minutes before serving. Result: delicious, perfect ravioli. Not one piece tore open while boiling. In the photograph you also see a few noodles, made from the leftover dough. I don’t like to waste my dough.

I have marked some ravioli dishes to make by hand, following the instructions in the McHaughton, Vetri and Louis cookbooks I recently reviewed. They are all handmade, which requires somewhat different skills than I’ve been acquiring. But I am keen to try! 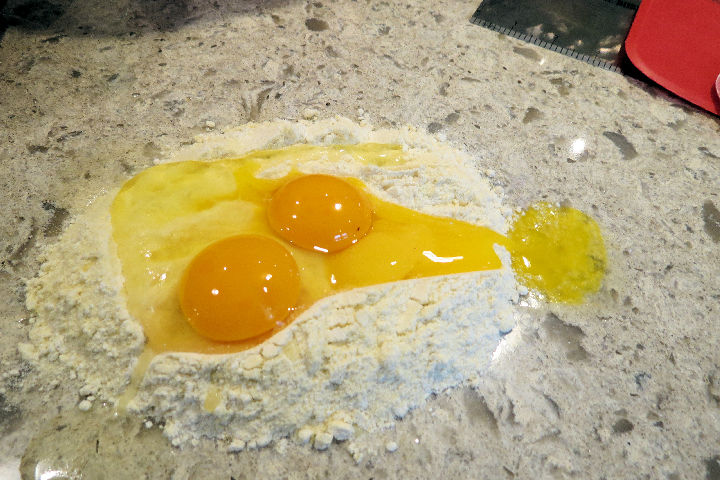 Another dish in the past month I tried was basic lasagna. I used my basic dough recipe with 140 grams of flour, half of it semolina, the other half tipo 00 flour (and two egg yolks plus one whole egg). This makes sufficient pasta for two of us, with very little left over. I am still experimenting with mixes of flour (semolina, tipo 00 and sometimes attah), but so far they have all worked well. I haven’t tried an all-semolina dough yet, however. I plan to experiment with other flours, like buckwheat and chestnut, later this month. 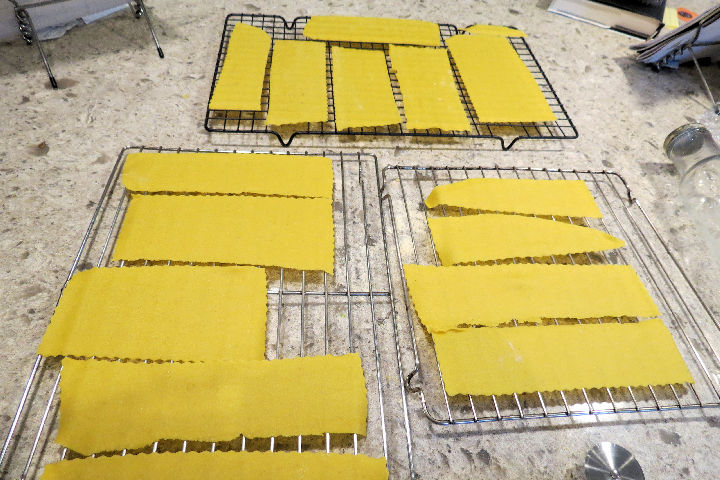 This is somewhat easy to prepare since only basic cutting is required. I rolled the sheets out at setting five (5) so it was a little thicker than my usual pasta. I cut the pieces with a knife, but a pasta cutter or pizza cutter will do. I let them dry on racks for 20-45 minutes until leathery.

Some books say you can cook your pasta right away, others recommend drying. I’ve so far found letting it dry a bit works well. I’ve tried both short times and lengthier times (to the point where the noodles were brittle). No difference in taste or texture that I’ve found. The only drawback is that brittle noodles are harder to handle because they break so easily. 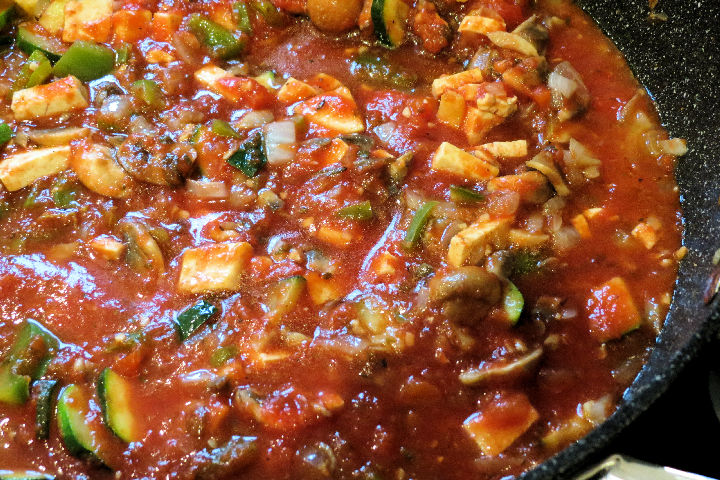 Meanwhile, I made the filling with tomatoes, onions, green pepper, zucchini, mushroom and tofu, plus oregano and garlic. I cooked it then let it simmer. Tasty! My only fault here was to make somewhat less than I really needed for that amount of noodle.

I use a little Tuscan herb infused olive oil to fry the veggies and tofu in – purchased locally at the Collingwood Olive Oil store on Ste. Marie Street. Using an infused oil also means I don’t need to spice the filling as much. 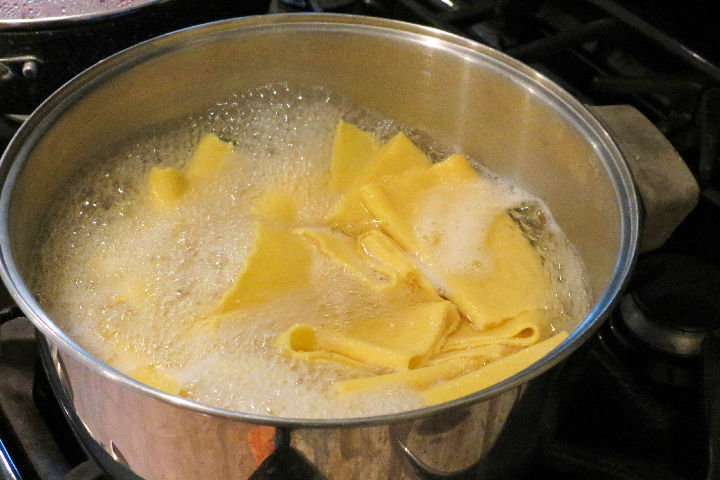 Then I tossed the lasagna sheets into the boiling water for about six-eight minutes, stirring constantly so they don’t stick.

Bake it until the cheese is bubbly and golden to brown in places. Because I used a glass pan, I could see the sides boiling, to be sure the whole dish had heated enough. You want it that hot so the filling and the pasta meld, and the Ricotta softens. 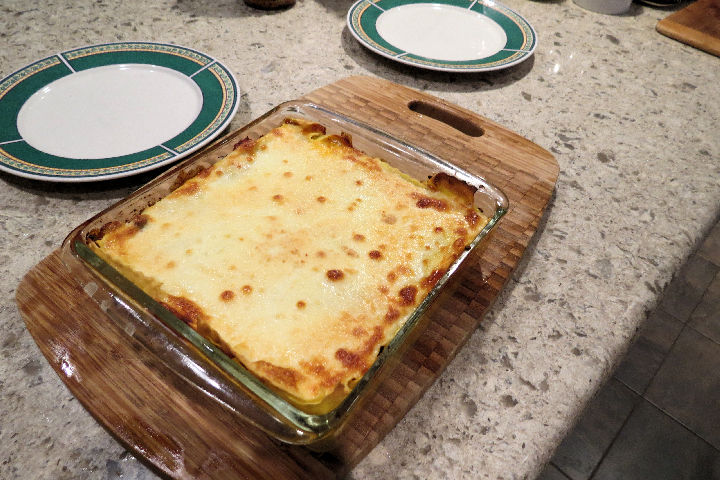 The result is a yummy dish that serves two for two nights. In future, I will cook more filling. I also need to figure a way to dispense and spread the Ricotta cheese more evenly. It tends to stick and resist spreading with a spoon – perhaps I need to wet the spoon back first? More research is needed.

The lasagna cooks up nicely the next day, too, and is easily microwaved or heated in the oven. As you can see, some of the pasta noodles extend to the top and outside. I like these bits because they crisp up nicely in the oven and add another texture to the dish. There are recipes for baking and frying pasta that result in this sort of texture, I have yet to try. The summer looms… 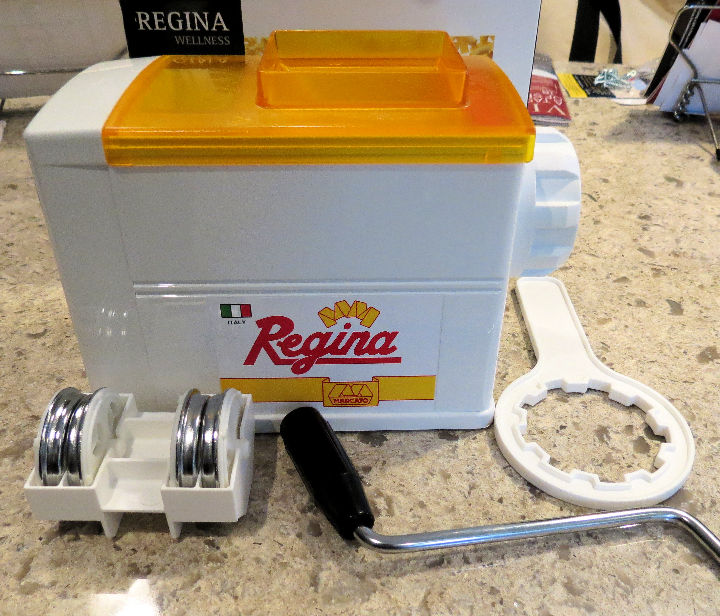 My latest dish was an extruded pasta made with my Marcato Regina pasta maker. This is a heavy-duty plastic device that works like an old-fashioned meat grinder. Some chefs dismiss these, but it worked fine for me.

You place your die in the front to determine the type of pasta. There are five choices: large and small macaroni (maccheroni and maccheroncini), bucatini (a fat spaghetti with a hollow core), fusilli and rigatoni. I chose the rigatoni, the fattest, thickest noodle, similar to penne.

I used a slight variation on my standard dough: 100g of semolina, 15g of attah, 10g of tipo 00. Some cookbooks recommend only semolina and water. I added the usual eggs plus a few drops of olive oil. The manufacturer’s instruction book recommends eggs, so why not? Sometime in the future, I’ll experiment with just semolina and water, but this dough performed beautifully. 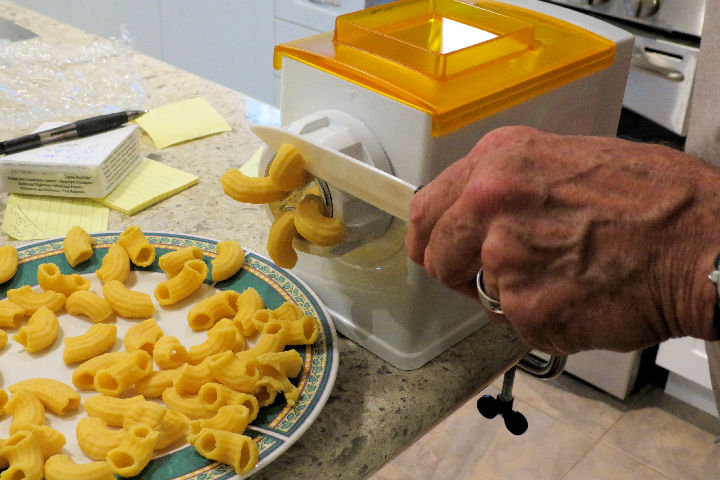 The process is easy but tricky for one person because you need to put small pieces of dough into the hopper, then turn the handle with one hand and cut the extruded dough with the other. It doesn’t take much effort to crank the dough out, but in future, I’ll change the location so I can cut with my right hand.

Put a lightly-floured plate under the front and rotate it as you cut so the pieces don’t pile up on one another. I ended up using two plates to avoid stacking the noodles. You can cut them any length you want, but mine were about 25-30mm each. I figured they would cook more efficiently than longer pieces.

Once you have squeezed out all you can, put the plates aside and let the pasta dry to leathery texture (25-45 minutes). The noodles won’t collapse if your dough is solid enough (make sure you let the dough rest 30-60 minutes before extruding to develop those gluten bonds!). 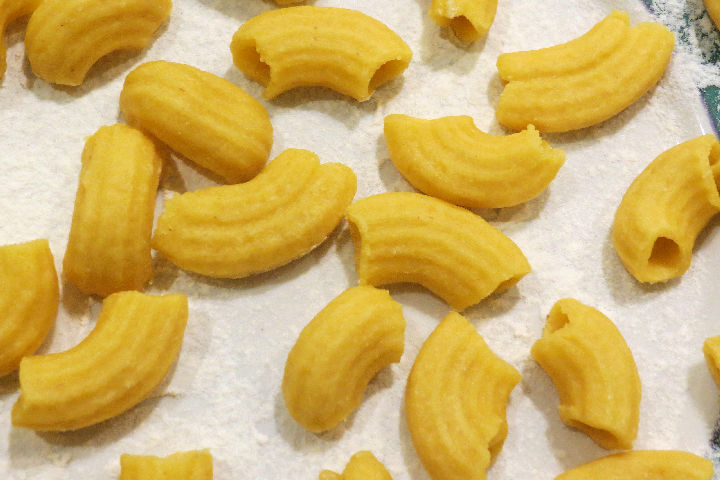 Follow the usual process for cooking: large pot of water with a little added salt. These noodles are thick, and take some time to cook, so sample them to make sure they are done thoroughly. The outside cooks a bit faster than the inside. I found it took 8-10 minutes.

I drained the cooked pasta and added it to a simmering marinara sauce to which I had added onion, garlic and mushroom. I let them cook together for another two minutes.Delicious!

Next time, I think I’ll add a blanco tequila to the sauce with the pasta, to give it a slightly fruity flavour.

There was a small bit of dough left over in the grinder, probably enough for four-eight more noodles. I’m not sure if this was because I didn’t keep cranking long enough, or was too small for the screw to express properly. Not that it mattered: we had enough for two. 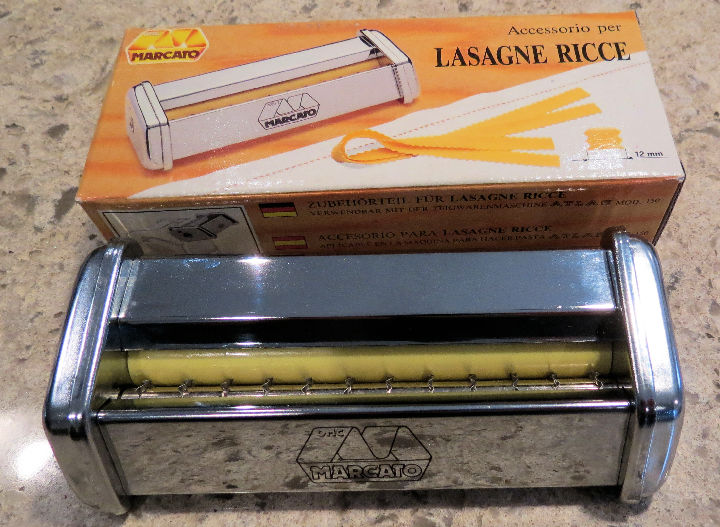 Cleaning was also rather easy. I disassembled the machine and removed as much moist dough as I could, then let it dry. The rest brushed off or could be tapped out.

My next dish will use my new attachment for the Atlas 150: the ‘lasagne ricce‘ cutter, to make 12mm (1/2″) wide, serrated noodles. I like the fettuccine I can make with the stock attachment, but sometimes I want a wider noodle. This should do the trick!