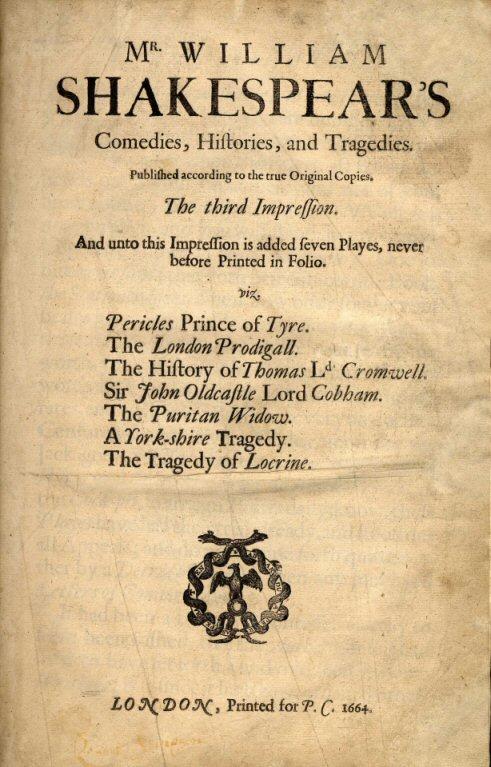 When the First Folio was published in 1623, it had 36 of the Bard’s plays, listed in three categories: histories, tragedies, and comedies (it didn’t include his longer poems, or the sonnets)*. And even then, these were not all of his plays. Several were not included, although they were known to the folio’s compilers.

For reasons unknown, there were several plays missing from the original canon, including Pericles, Prince of Tyre; The Two Noble Kinsmen; Edward III;  The Book of Sir Thomas More; Cardenio; and Love’s Labour’s Won. The latter two are “lost” (more on that, later); the rest are generally considered collaborations with other authors.

These missing plays were not included in the Second Folio, either. That publication included more than 1,700 changes in spelling and language, but nothing new was added.

The Third Folio, however, added another 943 editorial changes but also included seven additional plays attributed to Shakespeare: Pericles Prince of Tyre, The London Prodigal, The History of Thomas Lord Cromwell, Sir John Oldcastle, Lord Cobham, The Puritan Widow, A Yorkshire Tragedy, and The Tragedy of Locrine.

Today, only Pericles of the seven is considered a Shakespeare play (a collaboration with George Wilkins) and the rest have been assigned to lesser talents.

You will often find popular editions of complete works that have the original 36 plays, or either 37 plays (with Pericles) or 38 (Pericles and The Two Noble Kinsmen). The latter is the widely accepted modern canon (the major collections all contain the latter). More scholarly editions (e.g. Norton, Oxford, Arden) include additional plays like Thomas Moore and others (see below).

These extras in the Third Folio are by far not the only plays wrongly attributed to Shakespeare. Publishers in Shakespeare’s time often attributed plays to him to boost their book sales by riding on the Bard’s popularity and fame. Three of these plays — Edward III, Pericles, The Two Noble Kinsmen — have been hesitantly included in some collections as collaborations in which Shakespeare seems to have had some part in the writing. How much is, of course, always open to debate. Many scholars still seem reluctant to accept them into the canon.

And then there was the False Folio, printed in 1619 (four years before the First Folio was published). It was not actually a folio edition, but rather separate plays printed in a larger quarto version. It was the first (and unauthorized) attempt to collect and publish Shakespeare’s works together. It contained ten plays, including four incorrectly attributed to Shakespeare: Sir John Oldcastle, A Yorkshire Tragedy, and The Whole Contention Between the Two Famous Houses, Lancaster and York (consisting of two plays: The First Part of the Contention Betwixt the Two Famous Houses of York and Lancaster, and The True Tragedy of Richard Duke of York).

Adding Edward III (or more properly, The Raigne of King Edward the Third) to the canon remains controversial (the Arden Complete Works Third Series includes it). As noted on the Prenzie Players’ website:

Edward III, a play about the grandfather and immediate predecessor of Richard II, and the beginning of the Hundred Years’ War, was first published in 1596. The specifics of authorship, co-authorship, and the revision process, are quite difficult to unravel, but it is very likely that Shakespeare had a significant hand in it. In the 2017 Arden edition of the play, editors Richard Proudfoot and Nicola Bennett say, “The circumstantial case for Shakespeare has sufficient dimensions to be persuasive, especially the relation of Edward III to Shakespeare’s early non-dramatic and dramatic writings. This places Shakespeare’s participation in the latter part of 1593 or the early part of 1594? (p. 89). The 2nd edition of the Oxford Shakespeare includes the play.

How could a play be “lost”? Apparently, it’s more surprising and fortuitous that any survived. David McInnis, a professor at University of Melbourne, says that, between 1567 and 1642, “only 543 plays from the London commercial theatres have survived, as many as 744 plays are identifiably lost, with hundreds more completely untraceable.” He adds that,

The versions of extant plays that survive are not necessarily the most recent, authoritative or any other ostensible index of quality – they might be old or inferior copies that happened to still be available when the Folio editors began their project of assembling Shakespeare’s works.

McInnis has written a book called Shakespeare and Lost Plays. You can check the Lost Plays Database for information on many of them. But maybe even more than 744 have been lost. the Folger.edu site adds,

…the texts of roughly three thousand plays from the great age of Elizabethan theater are lost to us. The plays that remain constitute only a sixth of all of the drama produced during that period.

Although Cardenio (a play based on an episode in Cervantes’ novel Don Quixote, co-written with John Fletcher) was lost, a play appeared in 1611 as The Second Maiden’s Tragedy, which some scholars say bears the imprint of the Bard’s collaborative hand, and some argue was the lost play itself. A competing claim as to the source for Cardenio has been made for the 18th-century play, Double Falsehood.

Love’s Labour’s Won may never have existed, rather than being lost. Although often suggested as a sequel to his popular Love’s Labour’s Lost,  sequels were very rare in Shakespeare’s day. It may actually have been an alternative title to an existing Shakespeare play: Much Ado About Nothing, All’s Well That Ends Well, or The Taming of the Shrew have all been suggested (although the latter has since been discounted by historical evidence). The Lost Plays Database has a fuller entry on Love’s Labour Won.

Sir Thomas Moore exists only as three, heavily edited, handwritten pages that many scholars believe are at least in part in Shakespeare’s handwriting. It’s commonly included in recent collections, like the Norton edition. It serves as an example of the collaborative efforts that went on within companies of players.

Author Eric Sams argued (convincingly, methinks, but I’m not a scholar) that Edmund Ironside is Shakespeare’s earliest extant work. However, Shakespearean scholars were not so easily moved by Sams’ claims (although author Anthony Burgess was among his supporters). Sams (who died in 2004)  continued to argue for the Bard’s authorship for many years, and his essays and letters are online thanks to his estate. They make an interesting read. Sams has other essays and articles on Shakespeare you might find informative and entertaining: he was also an advocate for the Edward III play as Shakespeare’s work.

The category of “romances” was added much later: in the 1870s. There are also called tragicomedies. As the Encyclopedia Britannica notes, “… they tell stories of wandering and separation leading eventually to tearful and joyous reunion. They are suffused with a bittersweet mood…” The Winter’s Tale, The Tempest (both originally classified as comedies), Cymbeline (tragedy), The Two Noble Kinsmen, and Pericles (neither published in the First Folio) — all of them among his later plays — are now classified as romances.

There were also numerous poems (even some spurious sonnets) attributed to Shakespeare (even during his lifetime), most of which have been subsequently rejected by scholars. However, some are still topics of heated debate, including A Funeral Elegy, and A Lover’s Complaint. Several collections of complete works include them, despite the controversy.

Although the first book of Shakespeare’s collected poems was published in 1640, the poems and sonnets were not added into collections with the plays until the 18th century. Today it is common to find editions of his complete works with both plays and poems.

In the late 17th and early 18th centuries (post-Restoration), Shakespeare’s language was seen as old-fashioned. His plays lost popularity and several were re-written for contemporary audiences. Dialogue and plots were changed, brought into line with current sensibilities. Lear, for example, was given a happy ending. These, too, make fascinating reading because they give us a view on how the Bard was interpreted and viewed then (in a similar vein, the BBC produced Shakespeare Retold: modernized versions of four Shakespeare plays, available on DVD).

Even those pieces not by Shakespeare make an interesting read because they are also windows into the linguistic, cultural, and social spheres of the era (the late 16th-early-17th centuries). Many of these apocryphal or contested poems and plays are available today in easily accessible and inexpensive paperback editions (i.e. Shakespeare Made Fit: Restoration adaptations of Shakespeare, by Sandra Clark).