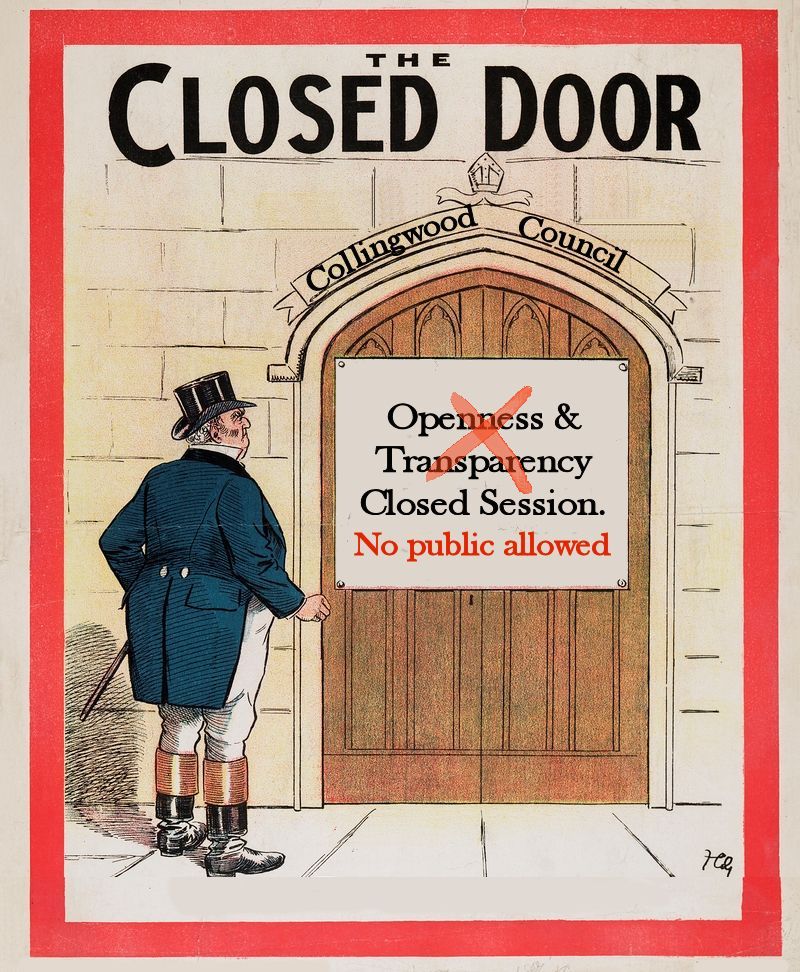 Those words are from an opinion piece by Ian Lee, published in the Ottawa Citizen, back in 2008. Important words; words that should be carved above our own council table in large letters.

Although it seems like he was writing about Collingwood Council, Lee was actually writing about the need for more accountability and openness in the public sector, especially about stating expenses and costs of federal government projects and initiatives. Lee wanted to “…ensure the accountability of public policy expenditures to Canadians – who pay the bills – thereby ensuring the legitimacy of our democratic system.”

Prescient words they are, given the current investigations into the Mike Duffy and the Senate entitlement, spending and expense scandals currently in the courts.

But of course, his comments have parallels here, in the local municipal sphere.

Transparency? Wasn’t the public promised more openness and transparency from this council? I recall one who was elected promising in his campaign ‘fewer in camera meetings.’ Chests were thumped, drums banged over the supposed lack of openness by previous councils. Yet it seems we have had more secretive sessions this term – and votes to go behind closed doors are met with silence, rather than questions from council about the need to do so.

Maybe in the newspeak of this council, where openness is considered, less is more…

Ontario’s ombudsman released a little booklet about local governments, and the need for openness and transparency. It is called The Sunshine Law Handbook. That booklet has some pieces of advice for local politicians, including this: “Whenever possible, make decisions in public.”

And in case you overlooked that, it adds this nugget: “…fundamentally, municipalities can abide by the spirit of this legislation by remembering six words: When in doubt, open the meeting.”

Another of those aphorisms that should be carved above the council table.

The handbook is brief and well worth reading, but I suspect few at the council table have made that effort, judging by the number of in camera meetings this fledgling council has already entertained.

Have they all been legitimate? Perhaps, but having served 11 years on council, I suspect not all comfortably fit the narrow categories listed in Section 239 of the the Municipal Act and some stretch the permissions. I also know how easy it is for legitimate in-camera discussions to go off into areas that should be discussed in public.

And simply because administrative staff don’t want to discuss their own agendas or activities in public, doesn’t mean they should not be discussed openly by council. The tail should not wag the dog in municipal governance. Yet it does.

Perhaps, too, it is not only council who needs to read that handbook, but also some member(s) of the administration who insist on holding such meetings – like this week’s ‘special’ council meeting held almost entirely behind those closed doors. Can we really be sure it deserved the secrecy? Is the public best served by such closed-door discussions?

Citizens concerned with the nature of an in camera meeting can file a request for an investigation by an independent adjudicator. It might be well worth the $5 spent to have them justified and the air cleared. And if they prove legitimate, then one might file a Freedom of Information Act request to find out the legal costs behind some of these. It appears the days of restraint over legal fees has ended.

Lee also said in his commentary,

…the history of the English speaking peoples from the Magna Carta to present day is the ongoing struggle for freedom by the people from arbitrary and unaccountable government rule.

Arbitrary government rule? Unfortunately, we do not have a ratepayers’ group which acts as a local watchdog to oversee the acts of council and comment publicly on the abuses of process and errors of judgment. Recent  associations laying claim to this role were formed from political agendas and driven by personal vendettas. They manipulated the facts, and used misinformation and disinformation to present their own ideologies and conspiracies. Then, once their objectives were achieved – usually getting their chosen few elected – they evaporated. They would not, of course, stick around to criticize their own.

Perhaps this cynical approach to local politics deters others from forming a legitimate citizens’ group actually concerned with the community rather than petty, personal issues. Who would want to be tarred by this brush of hypocrisy that painted previous groups?

Then too, the watchdog role once proudly practiced by local media was abdicated of late in favour of either non-reporting or overt partisan bias. Neither the public nor any dissenters to the block at the table can expect any objective coverage these days. A legitimate ratepayers’ group would fare no better in this media.

Silence over the abuses and errors amounts to acquiescence. Unlike accountability, acquiescence does not breed legitimacy; it merely encourages further abuses. And I suspect some of those abuses are happening behind closed doors with the knowledge and support of this council. Where, we ask, is the openness and transparency we were promised?