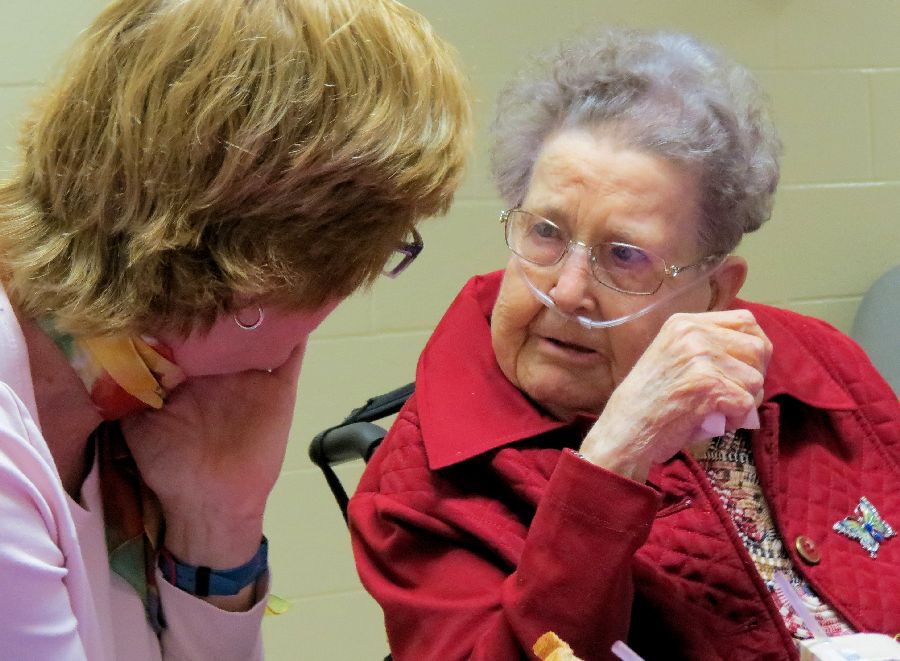 Mary Mabel Bernice Chadwick passed away quietly in the morning of April 13, 2015 in her room in the Tony Stacey Veterans’ Care Centre. She had awakened that morning, and spoke briefly to staff, but nodded off shortly after. She never awoke.

She was 95 years old and lived a full, rich life, one of remarkable resilience and strength.

Mary was born shortly after WWI, and grew up in Canada during the Roaring Twenties, the Great Depression and the years of recovery that followed. But then war came back.

She was a young woman when WWII broke out. She soon followed the family tradition of service. In 1942, she volunteered, and served the rest of the war as a Wren (WRNS – Women’s Royal Navy Service, nicknamed Wrens) in Halifax; a nurse in the naval hospital. Her wartime experiences would build her character and help her survive her own life’s tragedies.

Mary was always proud of her veteran status. Her father was a naval veteran of WWI, and her two brothers, Billie and Doug, had joined the Canadian navy early in the war. Twenty-two-year-old Billie died at sea in 1943 when his ship, the destroyer St. Croix, was torpedoed while escorting a convoy in the North Atlantic.

Mary had a framed picture of them both, young men in their Navy uniforms, on her wall in her room, each adorned with a red poppy. She never forgot, and she attended Remembrance Day ceremonies every year. 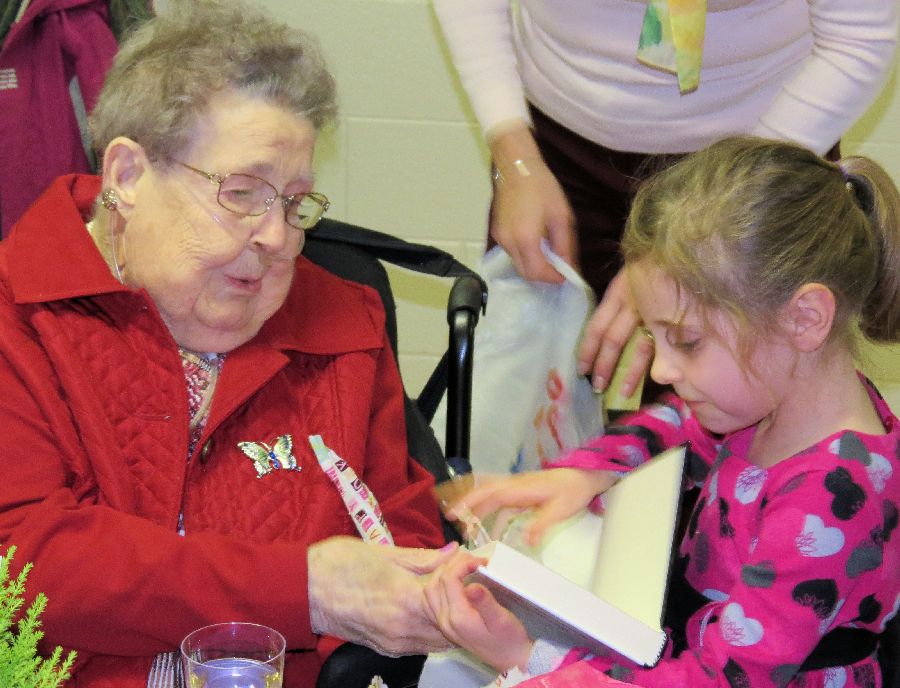 Mary was born on Christmas Day, in 1919, the same year the US enacted Prohibition; the same year Iris Murdoch, Edmund Hillary, Eva Peron, Pete Seeger, Liberace, Doris Lessing, Isaac Asimov and Pierre Eliot Trudeau were born. She outlived them all.

In her lifetime she saw the development of radio, commercial aviation, television, computers, the internet, rockets, the space program and so much more.

Technology and change didn’t frighten her: she embraced it. In her 90s, she learned to use a computer and, until her eyesight failed her and the screen became too difficult to read, she used to send email messages to family members. She used a cell phone to stay in touch. She was still sending text messages to family by cell phone in her last week, laboriously tapping out each letter with her single good hand.

Mary was of mixed Scottish and English ancestry. Her father’s family – the Pudneys – had emigrated to Canada from Kent, England, in 1890. Her father was born in Canada, in 1893, during the last decade of Queen Victoria’s reign. When war broke out, in 1914, he served in the fledgling Canadian Navy on the cruiser Niobe.

Her mother’s family – MacDonalds – came to Canada from the Scottish Highlands to Nova Scotia, arriving at Cape Breton on the Hector, in 1773. Her Dunlop ancestors arrived from Scotland in the early 19th century. Her grandfather was a Dunlop, her grandmother a MacDonald from the original clan on the Hector.

Her parents, William and Jean, lived in a frame house William built in what was then the undeveloped west end of Toronto – Etobicoke – an area of woodlots, unbounded fields, open farmland and almost no traffic, where grandchildren would later run and play. Today it is crammed with busy roads, strip malls, houses packed onto small lots, and tall apartments towering over all; a school occupies the place where the old home stood.

After the war, in December of 1945, Mary moved back to Toronto to be with her parents. At her Aunt Grace’s boarding house, in the late 1940s, she met William – Bill – Chadwick, who had come from war-ravaged England in 1947 to start a new life in Canada. They fell in love, married in July, 1948, and moved to Windsor where William had landed a job. Shortly after, a son, Ian, was born. Mary was 30.

They moved back to Toronto for another job opportunity, where a second son, Jerry, came just less than three years later. In the early 1950s, they bought a small house in a new subdivision in Scarborough, and soon also had a small cottage near Penetanguishene. The family made the drive every weekend possible, entertained on the long drive by Bill singing songs he had learned in his youth, including pieces from Gilbert & Sullivan operettas.

Fate was not kind to Mary. In spring, 1960, as she prepared to send her kids to Sunday school, she collapsed. She suffered a debilitating stroke that paralyzed her left side and put her in hospital for the next two years. This was several years before the provincial health care plan came into effect and the impact on the family was significant – emotionally and financially. The house and cottage were sold and the family had to move into a small apartment to make ends meet.

Although she had been warned she might never walk again, Mary was determined to prove the doctors wrong and, although it took all of her effort, finally left hospital able to walk with a leg brace and cane. But she was never to use her left arm again. Bill was her support and they walked arm in arm, a familiar sight for decades.

Mary never let her disability define who she was and she learned to use her right arm to do everything her two arms had done in the past, even needlepoint. She refused to be bound by any limitations; refused to live life as a cripple or to suffer anyone’s sympathy. She was too independent and strong for that.

In their later years, long after the children had left the nest, Bill and Mary moved into the basement apartment in Jerry’s house, surrounded by his family and pets. They spent as much of the winter in Florida as they could manage, enjoying the warm winters there among the orange trees. They eventually sold their Florida property when it became too much of a chore to make the trip and to get around.

Mary’s health and condition deteriorated with age, until Bill could no longer care for her himself. In 2002, she moved into the Tony Stacey Centre for Veterans’ Care, for what was to be her last home. Bill, however, visited her daily, making the drive to spend many hours with her. Then, in 2005, he took ill and after several months of illness, passed away from the cancer that ate away at him. Mary grieved deeply.

For the next decade, Mary continued to live on her own at the Centre, making friends, visited by her family, and always missing her Bill. Because she became wheelchair bound in her last years, Mary was able to get out for special events only rarely, but she delighted in every minute she was able to do so. She outlived the close friends she made at the Centre, and she always spoke fondly of their company.

A voracious reader all of her life, Mary’s failing eyesight – reduced by macular degeneration – threatened to rob her of one of her dearest pleasures. Then she discovered e-readers that could use to enlarge the type so she could read again. She quickly bought a Kobo and continued to use it until her last week.

The walls of the corner of her shared room were decorated with photographs of family which she never failed to point out to visitors. She loved her family, especially her grandchildren and great-grandchildren, and she was deeply proud of their accomplishments. 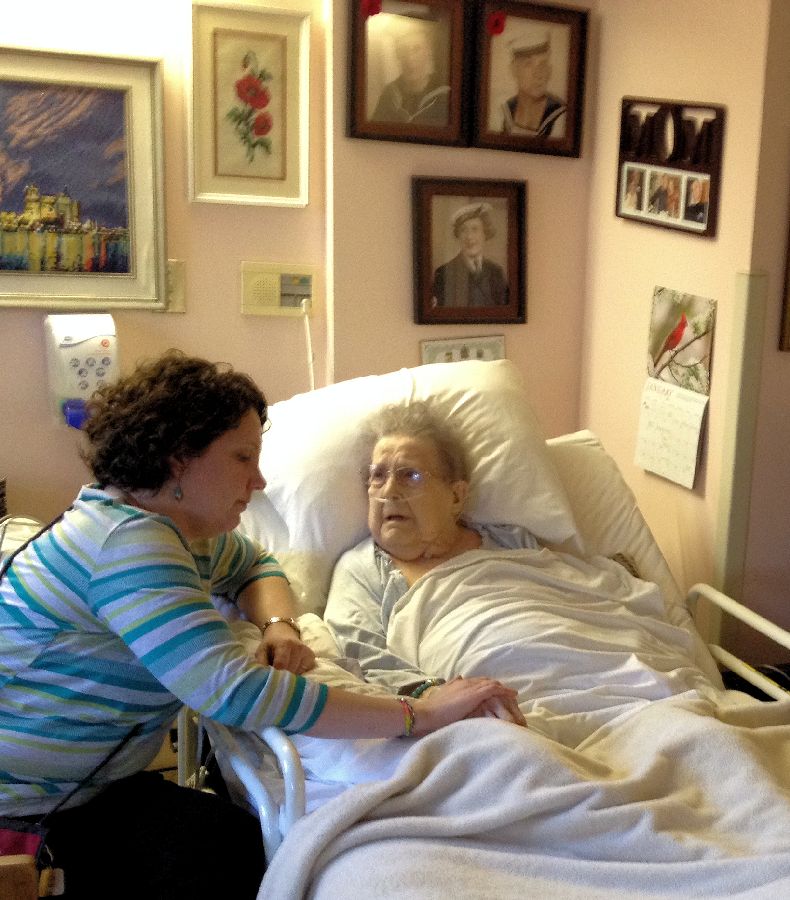 Mary remained fiercely independent throughout her life and even as her strength and her body failed in her final weeks, wanted to do things herself, not have them done for her, if at all possible. From late 2014, she and all around her knew the end could not be far off.

She remained mentally sharp, with an amazing memory, until her final few days, when age and her health took their toll at last. She knew, very well, what her condition was and the inevitability of it. She was prepared, as were we all.

The nurses and staff at the Centre adored her and she reciprocated, treating them like her extended family. When she suffered a turn for the worse last week, many of them came into her room to ask after her, to say hello, and to wish her well.

Her strength, her will and her independence that stood up to so many of life’s challenges, could not overcome the final contest with age. Over the weekend, her condition worsened and it was evident to all who saw her that the end was near. When it came, early on Monday, it was merciful and gentle.

Mary will be missed by her family and all who knew and loved her. She inspired us to be strong and have courage. She had a good life. Rest in peace, my mother, Mary Bernice Chadwick.