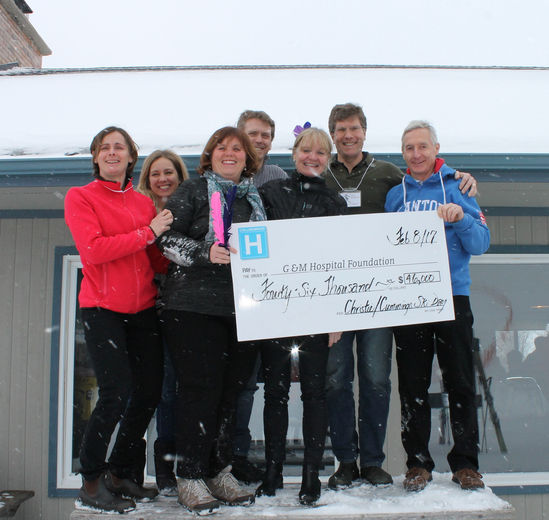 The town’s budget is by far the single most important thing elected officials have to manage. It’s complicated, affects everyone in town, reaches into every department, ranges through services, user fees, and ultimately determines the quality of life for everyone here. It is the one thing that demands the full attention, the full concentration,  the fullest effort of our councillors.

It demands active participation and open dialogue, full discussion from all of our elected members.

So what does our deputy mayor do when others are struggling through the budget? Brian Saunderson leaves the room to go play on the ski hills with his buddies.*

Showing his disdain for the people who elected him, Saunderson left the February 8 budget meeting long before it was finished, and joined his friends from work to party on the ski hills.

It left The Block without its leader, headless, and in his absence, they floundered like landed fish without the ocean of his benevolent control to tell them how to vote or what to think. Well, okay, they flap and flounder by themselves most of the time even when he’s there, but at least they stayed in their seats and worked through the whole meeting.

You can see him in the photo from the Empty-prize Bulletin. Beaming after he shirked his responsibility in order to play on the slopes. Smiling while his cohorts are sitting indoors, hunched over their desks trying to wrestle with the town business they are paid to manage.

It was a daytime meeting, a Wednesday. Many at the table took time off from work to fulfill their civic duty. Staff had to suspend the pressing demands of their jobs to be in the meeting so they could present their department’s budget and answer questions. Members of the media had to leave their newsrooms, stop working on other stories, cancel meetings and photo shoots to sit in the council chamber to hear those presentations. One councillor postponed a previously-planned holiday trip to be sure to be at the meeting.

Saunderson, however, went skiing at a private resort while all the rest were making the effort to fulfill their duties. He left early, while the rest stayed until 4 p.m. Why work yourself when you have your minions to do it for you?

Remember his statement before the election that, “Council is elected to serve the residents of Collingwood and is accountable to the residents throughout its mandate.” Where is that accountability now?

He also promised to “Improve communications to ensure the residents of Collingwood are informed of all council initiatives and engage the residents regularly to get community feedback.” How can you inform residents of anything when you don’t even attend the meetings? What’s he going to communicate to us – the snow conditions?

What arrogance. What utter disregard and disrespect for the public.

Collingwood deserves a deputy mayor who takes his responsibility seriously and doesn’t shirk his civic duty for personal pleasure. He should resign – after he apologies to the community.

~~~~~
* Two weeks after the event, the photograph of the truant DM showed up in the EB (making it history, not news). Saunderson was photographed with a fundraising cheque meant for the CG&M Hospital – the very institution whose redevelopment The Block is trying to derail. The hypocrisy didn’t escape readers who commented on it to me.

“His army rebelled in Spain; this arose from nothing but his too great leniency, which gave his soldiers more licence than is good for military discipline… someone in the Senate said there were many men who knew much better how not to make mistakes, than who knew how to correct the errors of others.”