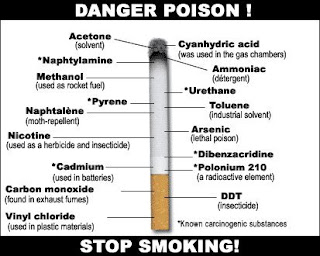 I don’t know how to sugar coat this in some politically-correct, sensitive, caring way that doesn’t overtly offend anyone, but if you haven’t already figured this out by now, here it is: smoking is stupid. Really stupid.

Even worse, smoking makes you even more stupid while you do it:

Researchers tested the IQs of more than 20,000 healthy men between the ages of 18 and 21 who were either serving in the Israeli military or who had recently completed their service. Twenty-eight percent of the men in the sample smoked, while 3 percent were former smokers and 68 percent had never smoked. The average IQ of the smokers was 94, compared with 101 among the non-smokers. Men who smoked more than a pack of cigarettes a day had an average IQ of 90. Although a normal IQ falls between 84 and 116, the difference observed in the study is still considered significant.

And if you’re a heavy smoker and heavy drinker, your IQ plummets to the point you’re going to find yourself watching Fox ‘News’ and thinking it was time to give Sarah Palin another chance. Or even Stephen Harper, if you’re binge drinking.*

This week, a story in the New York Times just added to the list of reasons that smoking is stupid. Maybe you didn’t think it could get any more stupid, maybe you thought we knew it all already, but you were wrong. The piece, titled Smoking’s Toll on Health Is Even Worse Than Previously Thought, a Study Finds, says:

A new study adds at least five diseases and 60,000 deaths a year to the toll taken by tobacco in the United States. Before the study, smoking was already blamed for nearly half a million deaths a year in this country from 21 diseases, including 12 types of cancer.
The new findings are based on health data from nearly a million people who were followed for 10 years. In addition to the well-known hazards of lung cancer, artery disease, heart attacks, chronic lung disease and stroke, the researchers found that smoking was linked to significantly increased risks of infection, kidney disease, intestinal disease caused by inadequate blood flow, and heart and lung ailments not previously attributed to tobacco.

And why would this be? Aside from the powerfully addictive nicotine, tobacco smoke contains a bounty of toxic chemicals:

Cigarettes contain more than 4,000 chemicals, 69 of which can cause cancer. With every cigarette, a person inhales:

And don’t get me started on the offensive, environmentally-fouling and dangerous litter smokers produce by dropping butts on public sidewalks, in parks, on beaches and from cars.

Canadian smokers are somewhat lower in overall percentages than American smokers (men: 20.5%, women: 15.3% according to the CDC). Health Canada reports:

That’s still one in seven people smoking. Way, way too many. And even though the numbers are slowly dropping (and, one has to assume, our collective IQ is rising), there are still too many people aged 15 to 24 smoking. The 20-24 year-old group has a 20% rate.**

That page above also notes:

Fifteen cigarettes every day means smoking 5,475 cancer-causing, IQ-lowering cigarettes in a single year. And how much does it actually cost to buy all those cigarettes? Based on data from the Non-Smokers Rights Association, a carton of 200 cigarettes in Ontario is $85. That works out to more than $2,325 a year! Based on the tax per cigarette ($0.13975 – see this story) that makes it $2.10 a day in taxes or more than $765 a year smokers pay the government to get sick. (BTW, in Manitoba a carton is $125 and the rest of Canada should charge that much!)

If I gave you $2,300 would your first impulse be to send a third of it to the government? That’s what you’re doing when you smoke. So tell me what’s smart about that? 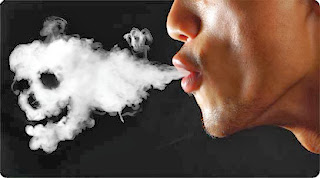 We all know, too, that smoking is an addiction. Like crack, like heroin, cocaine, opium and Oxycontin. Addiction, says Cancer.org, is defined as “…the repeated, compulsive seeking or use of a substance despite its harmful effects and unwanted consequences. Addiction is mental or emotional dependence on a substance.”

But we treat smoking as more socially acceptable than those other drugs. Why? They’re all addictions; they are all illnesses. Because our government hypocritically allows tobacco to be sold because it rakes in a tidy profit doing so – blood money from people’s misery.

No one wakes up in the morning and thinks to themself: I’m going to harm myself today. I’m going to try to make myself ill, make my breath so bad it offends my friends and co-workers, make myself age prematurely, yellow my teeth, cough a lot, litter, and waste my money. But at least one in seven us us do just that, every day: they light up.

But there are ways to quit: therapy, social networks, patches, gum… sure it’s tough, sure it’s hard to quit. But so what? Nothing worthwhile in life is easy. Nothing worth doing is a cinch.

Where’s the backbone, the courage to do something good, something right, something smart? Doing what’s stupid, doing what’s weak is easy: just light up. It takes self respect, courage and intelligence to do the opposite.

Researchers from University College London found that smokers who drank alcohol heavily had 36 percent faster cognitive decline compared to non-smoking moderate drinkers.
Smoking and heavier alcohol consumption often co-occur, and their combined effect on cognition may be larger than the sum of their individual effects.

** Here in Simcoe County, it seems we’re not as smart as the rest of the country, because a survey done in 2011 found:

The average smoking rate for Simcoe County is 27% and the Provincial average is 19%.

That may be a bit too high. The latest provincial population-health profile of the region (North Simcoe-Muskoka) found:

Rates of daily smoking are significantly higher in North Simcoe Muskoka (20.8%) relative to the province (16.8%).

However, this figure covers other areas outside Simcoe County, and the higher figure may include non-daily smokers. Regardless, it shows we’re not as bright as other areas of the province when it comes to making wise choices about health, our lifestyle, and our money.