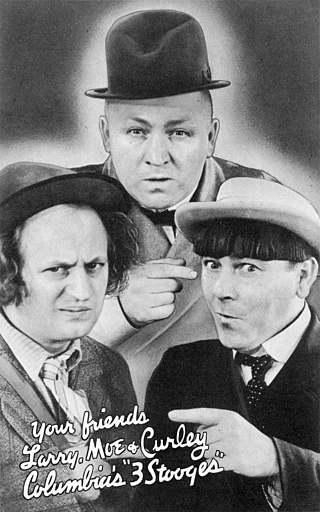 There’s a bittersweet pleasure in watching the Three Stooges these days, knowing about them, their careers, their lives. What seems like zany comedy on screen was, like so many celebrity stories, much more complex, contentious, and even tragic at times. But there’s also an insuppressible joy in their work that keeps drawing me back to watch more. Moe, Larry, and Curly (and Shemp) will always bring a smile to my face. The subsequent replacements for Curly sometimes will, too, although not as often.

And with more than 200 film credits to their names, running from 1930 to 1970 in both shorts and feature films, there’s a lot to watch. One hundred and ninety of those short films were for Columbia Pictures alone (1934-59). These can be seen today online or in DVD collections from Sony (released as multi-year sets from 1934 to ’59, and as 17- or 20-disc collections; yes, of course, I have them). There are 51 other films or shorts in which they collectively starred or have a role, 17 of which were newsreels or bio-shorts.

And that doesn’t include all the films several of them made solo (Shemp Howard in particular was prolific) nor their 156-episode cartoon series, The New Three Stooges, that included live-action segments, and ran from 1965-66. And even this doesn’t show off their impressive careers that began in the 1920s in vaudeville. Moe Howard was performing on stage with his friend Ted Healy in 1923, joined by his brother Shemp in 1924. Louis Feinberg — aka Larry Fine — joined them in 1928. The three would appear with Healy in their first film, Soup to Nuts (1930), but parted ways with Healy over a contractual dispute. For a couple of years, the trio performed onstage as “The Three Lost Soles” and “Howard, Fine, and Howard.”

Eventually, they made up and the trio again joined Healy’s act in mid-1932. Shemp, however, left less than a month later to pursue his solo career and was replaced by his younger brother, Jerry (aka Curly) Howard. Less than a year later, Healy was offered a contract by MGM, and took his act, with his friends to Hollywood. In the spring of 1934, the trio of Larry, Curly, and Moe parted from Ted Healy for good, and began working on their own at Columbia Studios, calling themselves “The Three Stooges” professionally for the first time. (Healy continued to work in film solo and with other sidekicks, but died in 1937)

The most well-loved of their works are still the earliest, those made from 1934 to ’47 for Columbia. That’s because Jerome Lester Horwitz — Jerry, aka Curly — was in them and provide the signature sounds and looks that are still known today. Curly had a stroke while shooting their 97th film for Columbia — Half-Wits Holiday — in May, 1946 (released in 1947). He was replaced in the trio by his older brother, Samuel — Shemp — who had already had a good career as a solo comic star. Curly suffered more strokes in 1949, and died in 1952 at age 49.

Shemp, who had starred with Moe and Larry in their earliest years in vaudeville and film, was a good replacement for Curly and provided his own signature identity in the trio. He starred in 77 Stooges’ shorts and one feature film. But in 1955, after he had filmed the 166th short for Columbia — Blunder Boys — he had a heart attack and died in a taxi on his way home from a boxing match. Because of contractual obligations, the remaining duo of Moe and Larry had to complete four films without Shemp, although his presence was patched in from previous films to make it appear he was still there.

Shemp was replaced by Joe Besser from 1956-58 (Columbia shorts 175-190; the last two released in 1959, then by Joseph Wardell — Joe DeRita aka Curly Joe. In 1959, Columbia ended their long-running contract with the Stooges, but with Curly Joe the trio went on to make seven feature films, had some cameo appearances in others, and finally ended their careers with a documentary of sorts, Kook’s Tour, in 1970.

My parents hated the Three Stooges, but did little to stop us children from watching them on TV. I remember sitting close to the small B&W screen in our living room, laughing at the madcap antics of Curly, Larry, and Moe, and sometimes Shemp or Curly Joe. Our parents fretted these manic slapstick comedians would encourage us to violence, much the same way modern parents think video games will do to their children (spoiler alert: they don’t). And here I am, more than 60 years since I first saw them, still watching them and laughing at them.

The Stooges were all older than my parents; only a little younger than my grandparents, in fact (the oldest, Moses Harry Horwitz — Moe Howard — was born in 1897). But the magic of film is that we see them as they were when they were young. Forever immortalized, frozen in their youth on celluloid. I see them in their prime, not their dotage.

Susan thinks they’re puerile, but I get a delight at every woop-woop-woop and nyuck-nyuck-nyuck. And because the majority of their work was in shorts — most running 15-20 minutes — I can watch several in a row in one sitting (on my computer, headphones on so I don’t disturb Susan, although my guffaws may annoy her still…). I will admit that seeing too many can get stale at times, so I try to mix eras so I can see the trio in its different incarnations, with their act honed to suit the varying mixtures of performers.

“…they are bad, and will not keep their word to you, you too are not bound to keep yours to them.”