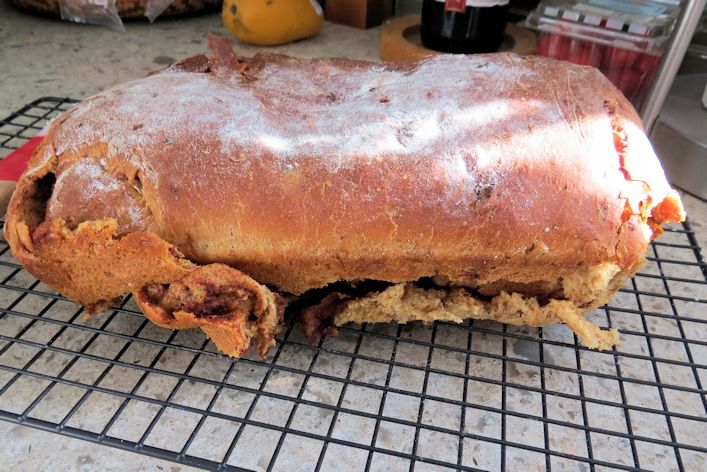 While I haven’t tried to make a sourdough raisin bread yet, that idea occurred to me while I was making my latest breads, this week. I’m sure it would be a good mix, but I’ll have to build my levain up again, since I used all my countertop levain in yesterday’s bread (about 350g).

I still have a culture in the fridge, however, and will take some out to get it going in the warmer kitchen, today.

I made a medium-sized sourdough loaf, and two smaller raisin-cinnamon loaves, Friday. Somewhat ambitious of me, but with mixed results. 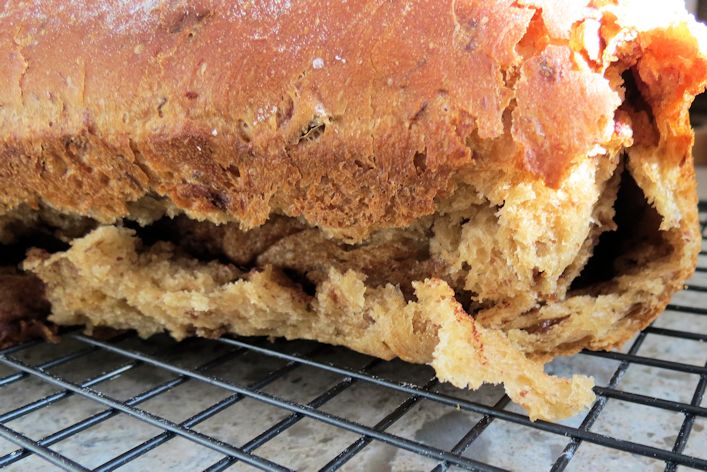 Two? You ask. Yes, because my first loaf was a mess. It stuck in the pan and broke at the cinnamon-spread layer when I attempted to get it free of the pan. Very disappointing. I decided to try another while I still had the ingredients on the counter. I wanted to offer Susan a good-looking loaf, Saturday morning. Presentation matters.

I’m trying to determine the best way to make a raisin-cinnamon bread that combines the nicest combination of  texture, flavour and structure. I have the flavour down pretty well, and the texture is close, but in most of my efforts, the bread has de-laminated where the layers of cinnamon spread are rolled into the dough. Sometimes just a bit, sometimes more. An elegant structure eludes me somewhat. 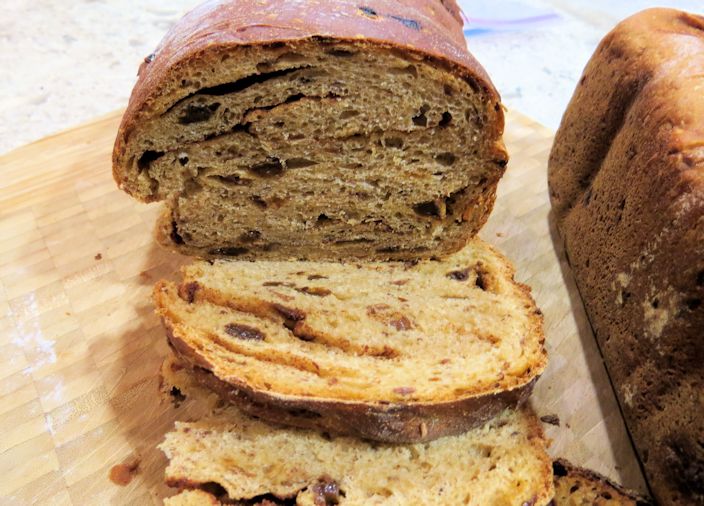 My first effort at raisin-cinnamon bread was a recipe from the 300 Best Canadian Bread Machine Recipes book. It combines everything in the machine, but used only a small amount of cinnamon (1 tsp). It didn’t make the bread very flavourful. While edible, it wasn’t spectacular.

I like more cinnamon, but because it’s a yeast inhibitor, I chose to put more (1 Tbsp) into a spread that could be used in a swirl in the bread itself.  I tried that in a bread a couple of weeks ago, with modest success. The idea works; the technique needs refinement.

I used molasses instead of sugar in the recipe, but otherwise used the book’s basic 1.5 lb. loaf recipe as presented for Friday’s loaves.

END_OF_DOCUMENT_TOKEN_TO_BE_REPLACED

“…whenever men are not obliged to fight from necessity, they fight from ambition; which is so powerful in human breasts, that it never leaves them no matter to what rank they rise.”

— Niccolo Machiavelli, The Discourses: I, 37