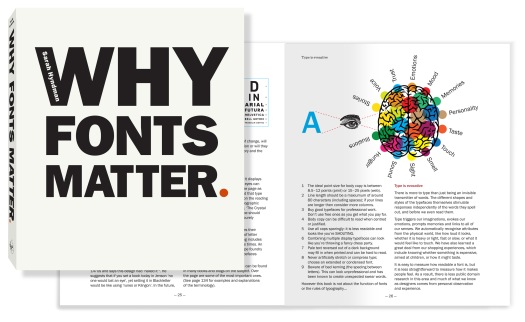 The first problem I have when receiving a new book on typography is that I spend far too much time looking up the typefaces described or sampled therein, and searching for them online, instead of reading. Then I start looking at (and critiquing) the typefaces chosen for the book itself. It’s a trees-not-the-forest kind of wonderment that comes over me.

As I am wont to do, I sit back on my deck in the evening sun, glass of wine in hand, and a large pile of previously-purchased typography books beside me, so I can make the introductions. Probably not necessary, since I suspect they already know one another. But it’s comforting to have them all together.

That’s just my own obsession with type and typography. There are, those peccadilloes aside, many great delights to be had in receiving a new book about typography. To open a page filled with characters, colours, shapes… it’s almost a childish joy. I trust some of you know that emotion, already. Sometimes I think talking about type is a bit like talking about Zen. From the outside, it seems suspiciously like mumbo jumbo that only the insiders can understand. But stick with me, grasshopper.*

Sarah Hyndman’s book, and the latest in my collection, Why Fonts Matter, doesn’t frame itself by asking if they matter. Of course they do. What she wants to tell is is how they matter, how they affect us. How they make us feel. How they direct us to buying, eating, music and other daily choices. And, of course, how they communicate their verbal and non-verbal messages. Very Mcluhanistic, the message and the medium and all that. And that’s in great part what Hyndman wants to tell us.

And like the Zen master’s stick thwacking sharply over the novice’s shoulders to spur awareness (and rouse us from sleep), Hyndman startles and awakens us. In a pleasant way, of course. A gentle stick. It’s meant as an interactive journey, not a lecture. And she has a light touch, and a mildly sardonic humour, too.

END_OF_DOCUMENT_TOKEN_TO_BE_REPLACED

Those long legs. Gently sloping shoulders. The swelling curves above and below. The sophisticated line of the throat. Everything to attract me, to draw my aging eye, to warm my heart. The sensual Bembo. She’s my kind of type.

Bembo is one of the great Renaissance typefaces that has since been revived. It was designed by Francesco Griffo and first used in a book of poems and essays by scholar Pietro Bembo, published by printer Aldus Manutius, in 1495. Monotype recut it for modern use in 1929, digitized it in 1990 and more recently, in 2005, redesigned it for today’s printing as Bembo Book.

Bembo Book’s designer, Robin Nicholas, says this of the typeface:

Bembo was drawn to embody the elegance and fine design features of the original but marry them with the consistency of contemporary production methods… (Bembo Book) is slightly narrower than existing digital versions of Bembo, it is a little more economical in use and gives excellent colour to continuous pages of text. Ascending lowercase letters are noticeably taller than capitals, giving an elegant, refined look to the text.

Adobe also made a Bembo typeface, but it seems to have drawn criticism from the admittedly rarefied community of type aficionados. Thomas Christensen, who writes The Typehead Chronicles, says this:

Adobe Bembo, however, has received a lot of criticism in the typophilic community for not living up to the quality of the metal version. It is said to be light and spindly and to produce a palid gray page. (Some of this criticism may be overdone.)
Some recommend Minion as an alternative, but I am not a fan of Minion. Another proposed alternative is Dante, but I think it has an entirely different feel. There are a couple of new versions of Bembo-like digital fonts that might be worth looking into. One is JY Aetna by Jack Yan. Another is the new Yale typeface by Matthew Carter, but it is only “available to Yale employees, students, and authorized contractors for use in Yale publications and communications,” a restriction that is a giant step backward.
Now, in 2005, Monotype has released a new digital version of Bembo, called Bembo Book. It is said that this version restored many of the admirable qualities of the letterpress Bembo…

Although dismissed by Christensen, Robert Bringhurst’s book, The Elements of Typographic Style, is set in Minion (with captions in Scala Sans), possibly because it doesn’t intrude into the language and the message (Bringhurst shows many typefaces in his examples). For the most part, a typeface should not be visible to the reader any more than a  window pane is to someone looking outside.

But it will be visible to a typographer or graphic artist, much like one magician knows another magician’s tricks. The trained eye will see how the text flows, how the eye is directed, how well the elements balance.

END_OF_DOCUMENT_TOKEN_TO_BE_REPLACED

As promised, here are the first 20 scans of the ads from the 1927 North American Almanac I recently mentioned. If there is interest, I’ll do another set later this week. There are probably another 40 or 50 pages of ads in the book.

I think these ads give us a wonderful window into the daily, household life of the time, into cultural views and medical thinking. As well, they show the state of advertising, layout and typography. It’s fascinating to look at the mix of typefaces and their placement.

Click on the image to load a larger version and see the ads in greater detail.

END_OF_DOCUMENT_TOKEN_TO_BE_REPLACED

There are many hypotheses in science that are wrong. That’s perfectly alright; it’s the aperture to finding out what’s right. Science is a self-correcting process.