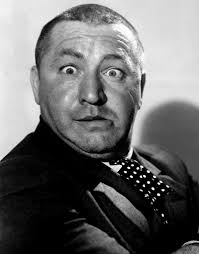 I bought a DVD set called The Ultimate Three Stooges this weekend.* I was rather surprised that even 20 DVDs could not contain all of the film work the trio (more on that, below) put together in their long career. But it does contain the core – and the very best – of their work, including several rare and forgotten early pieces.

I’m delighted to have it – before this set I only had a scattered collection of pieces, but nothing this comprehensive.

I grew up in the 1950s watching the Three Stooges in B&W on a TV that showed a test pattern early in the morning and late at night. TV channels didn’t run 24/7: they started and ended at specific hours. I developed an affection for them from back then.

Mostly TV showed re-runs of shorts from the 30s and 40s. My parents fretted over my brother and I watching them; they were considered too violent for children. It was the era of growing awareness of how media affected children. I didn’t see the Stooges as much more violent than the other series we watched – Tarzan, Wagon Train, Alfred Hitchcock Presents, Dragnet, The Naked City, The Untouchables, the Twilight Zone, Combat, Rawhide, The Outer Limits, Ernie Kovacs, Dragnet…

Of course unlike today, there was no graphic violence. And sex? None at all (TV couples were usually shown having separate beds if not separate bedrooms!)

At the summer drive-in we watched films like The Attack of the Crab Monsters, The Attack of the 50-Foot Woman, Them, Village of the Damned, One Million BC, Dracula and others. The Three Stooges seemed so innocent, so mild to us kids, in comparison to some of these films. Yet they have stuck with me all these years. END_OF_DOCUMENT_TOKEN_TO_BE_REPLACED

Who can resist a film with a title like that? Or Zontar, the Thing From Venus? Robot Monster? Voyage to the Prehistoric Planet? The Atomic Brain?

Clearly, I can’t. I love this stuff. B-films, especially scifi B-films. But I am a tad disappointed with this Mill Creek package.*

I recently received the set of SciFi Classics Collection: 50 Movie Pack, a 12-DVD collection, cover shown on the left. It turned out to be the same set I already had, just with a different cover, and a substitution of four films from the original lineup. Damn, that was $10 wasted.

Okay, I can live with the loss. The original packaged set (the “red box” package from Treeline) came with these 50 movies (as per a review on Amazon, with some alternate titles listed):

END_OF_DOCUMENT_TOKEN_TO_BE_REPLACED

In the late 1950s, I came across a copy (1912; an original edition, I believe) of Edgar Rice Burrough’s first published novel, Tarzan, The Ape Man, on my parent’s bookshelf in the basement. A forgotten book, one my father had likely brought with him from England when he immigrated here in 1947, something from his own boyhood. It sat beside old volumes of the Boy’s Own Annual and other English books. Of course I had to open it and read it.

From the very start, I was fascinated by it, by the adventure, by the sheer fantasy of it all. It was, as I recall more than 50 years later, the first ‘adult’ novel I ever read.* It was also the only such book on the shelf – among the various textbooks, Agatha Christie mysteries, and a few odds end ends. Only Tarzan, among them, held my attention.

In the early 1960s, I discovered science fiction. I used to wait in the local library for my father to pick me up after work (my mother was in hospital for a couple of years), and the library was a safe, welcoming place, albeit the Bendale branch was small. I was precocious and bored; and the children’s section was too small to contain my restless intelligence. I soon graduated from the children’s section to adult books in my impatience. I read voraciously.

About the same time, in the early half of the 1960s, paperback publishers like Bantam and Ace started reprinting the pulp stories of the pre-war years. While some kids collected baseball and hockey cards, I collected paperback book series.

Soon all of the works of Edgar Rice Burroughs were available in print, and I bought every one, building a library of his works (which I still have, mostly complete, although I may be missing a few of his western titles). I avidly read his Barsoom and Pellucidar series, finding them far more entertaining than the many Tarzan novels (which I collected and read, anyway). Given that the first Barsoom novel was written in 1912, it certainly has had staying power.

END_OF_DOCUMENT_TOKEN_TO_BE_REPLACED

In the early to mid 1990s, Collingwood had three independent video outlets. Then it had two and one franchise (Rogers). Several variety stores also had a small video rental business. Then the independents closed and another franchise (Blockbuster) moved in. Now the two corporations are gone and there is no place in town to rent videos. I am deeply disappointed.

What happened to the video rental business? Was it so unprofitable?

Or is it just a plan by Rogers to increase revenue through it’s “on demand” service? Or to drive customers to Netflix and get more revenue from their overuse of their parsimonious Internet bandwidth cap?

In my limited experience with the service, Rogers’ “on demand” is slow, clumsy and prone to interruption and stuttering. I was not impressed – I used it once, tried to use it twice more without success (it timed out both attempts), and never returned.

I haven’t tried Netflix, yet, but it seems it’s the only way we’re going to be able to watch current films. However, I’ve had mixed reviews from people I know who have the service – the list of films available is slim compared to what the video stores offered. We like to watch foreign films and independent films. I’ve been told Netflix doesn’t offer many (if any) of those, just the rather predictable Hollywood stuff.

We watch more movies than TV shows, mostly because most commercial TV is dreck. And that’s being kind.

With the exceptions of some BBC UK, HBO and AMC dramas, and a few odds and ends on CBC, PBS and TVO, the usual run of TV swamp people, ice road truckers, home hunters, so-called survivors, dancers, drivers, psychic frauds, junk store scavengers, restaurant remakes and pseudo-ghost hunters is simply junk food for the hard of thinking. Even the BBC Canada channel on Canadian TV is an unflattering, watered-down version of the excellent BBC America – which has dramas and mysteries and other series. BBC Canada is mostly a cultural wasteland: an embarrassing melange of tedious and repetitive kitchen and home “reality” shows.

Having no video rental outlet really limits our options for movie watching. I won’t pay for the cable movie channel because I already pay a lot more for cable than it’s worth. I would dump it back to basic cable except that we like to watch TCM. Rogers doesn’t offer any reasonable solutions for our quandary, just increasingly expensive packages. I could happily subscribe to about a dozen channels max, without any of the extra crap we never watch. But that sort of customer-friendly service isn’t available.

It irks me to pay for crappy and customer-hostile channels that repeat the same show over and over (like AMC showing the same tired movie twice in an evening and then again several times during the week). Or the number of channels showing the same thing, just with different channel numbers. Or the number of sports and music channels we will never, ever watch. Or the number that repeat shows from the 80s and 90s usually putting several of them back to back. We’re paying for hundreds of channels and we watch no more than six or seven most weeks.

I didn’t mind so much when we could rent movies, but when that’s no longer an option and we have to watch what’s on the box at any time, we get to see how really dismal, how intellectually arid, and how culturally shallow most TV is.

We can always buy videos, of course, but the two major outlets left that sell videos are probably about the lowest on the ladder for range of choices: Wal Mart and Zellers. Besides, who wants to pay $25-$30 for a B flick? After you’ve watched it, what do you do with it?

More and more, I feel we are being driven to dump cable TV altogether, and start using the Net for our entertainment.