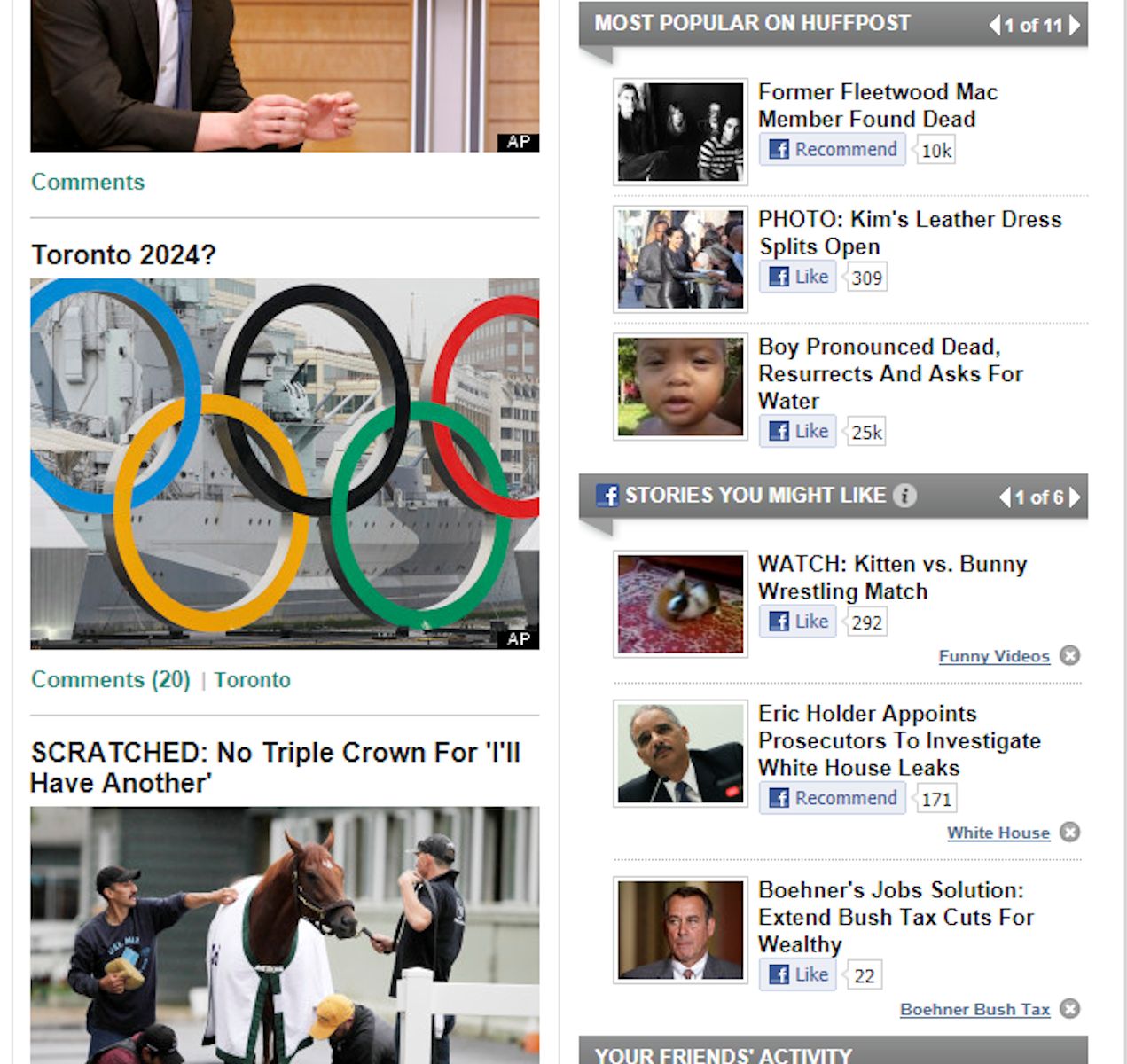 I’ve been troubled the last year or so by the increasing amount of trivial crap that is being presented on media sites as news, rather than what it really is: shallow gossip, pseudoscience, trivia, anecdote, voyeurism and personal experience.

As titillating as some glitterati’s wardrobe malfunction might be, it is not front page news. In fact, it isn’t worthy of the description news even when relegated to a more appropriate location, buried deep inside the site. Gossip belongs with the horoscope, cartoons and word-search puzzles.

Nor is a cute animal in some anthropomorphic posture news. Kitten and bunny wrestling? Why is there a front page link to such inane pap? But there is was on the HuffPost.

Who a “reality” TV star marries, what she ate, the condition of her dress or how much cleavage she shows is not only not news, it is not important in any sense of the word. It is an insult to the readers’ intelligence to put it on the front page. 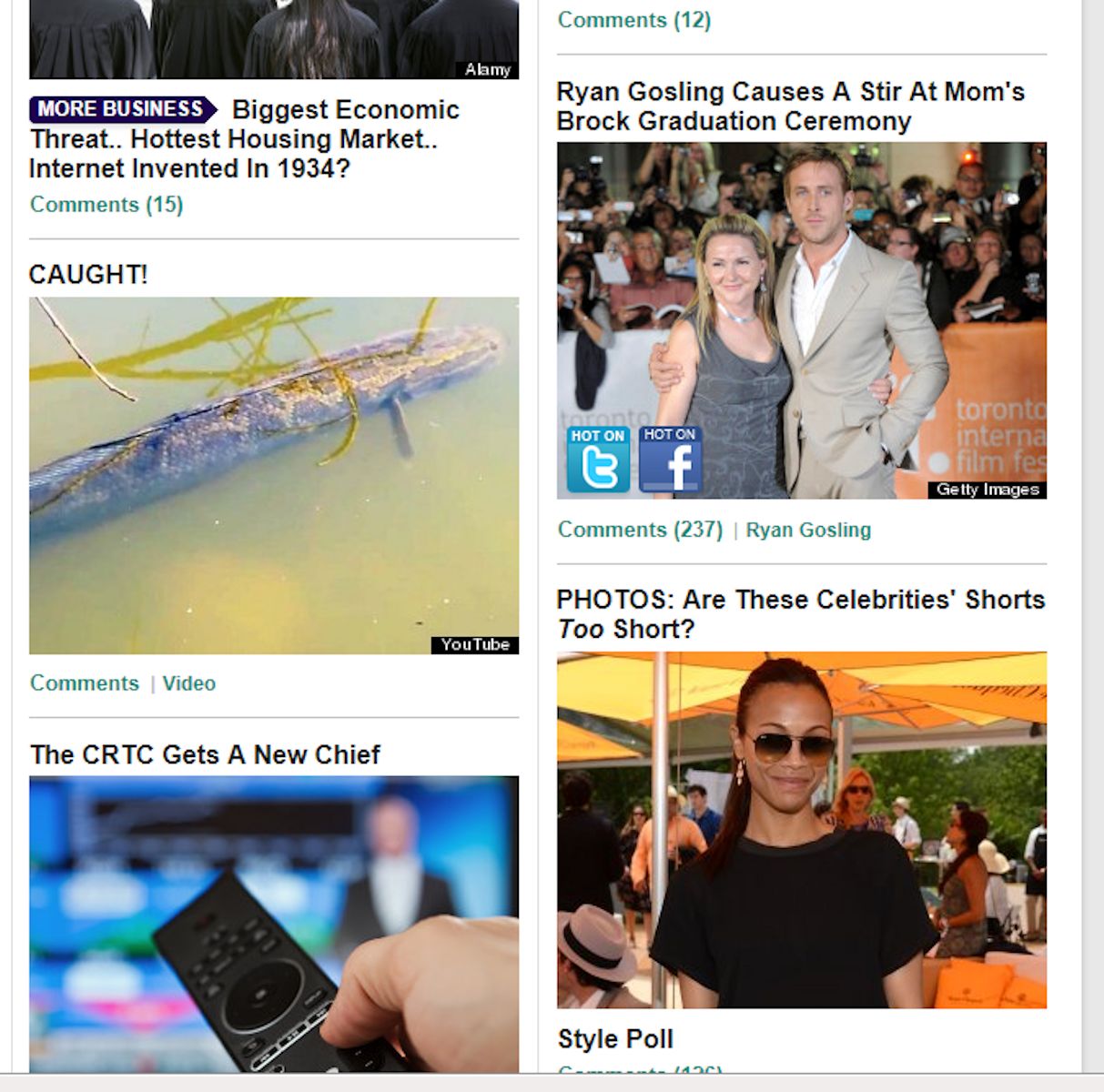 It is, in the dietary sense, empty intellectual calories. It seems to fill a space, but it is empty, void of content, just wasting bandwidth. Like doughnuts, soda pop and candy bars, it fills without fulfilling. It provides no cerebral nutrition. In short, it is material for the hard of thinking.

I never thought I’d say this, but there are actually TV shows with more intelligence than this crap. Not, of course, many; some BBC, TVO, PBS and CBC shows – not the American Picker, Swamp People or Jersey Shores nonsense, mind you. Both History and Discovery channels have become broadcasters of excremental trivia, dropping documentary for mediocrity.

There is, of course, a place for gossip about the haberdashery and sex lives of the glitterati. Supermarkets have racks of such irrelevant tabloids for those who thrive in the shallows of the intellectual pond. But it does not belong on the front page of an allegedly national or international media publication (like the Huffington Post). 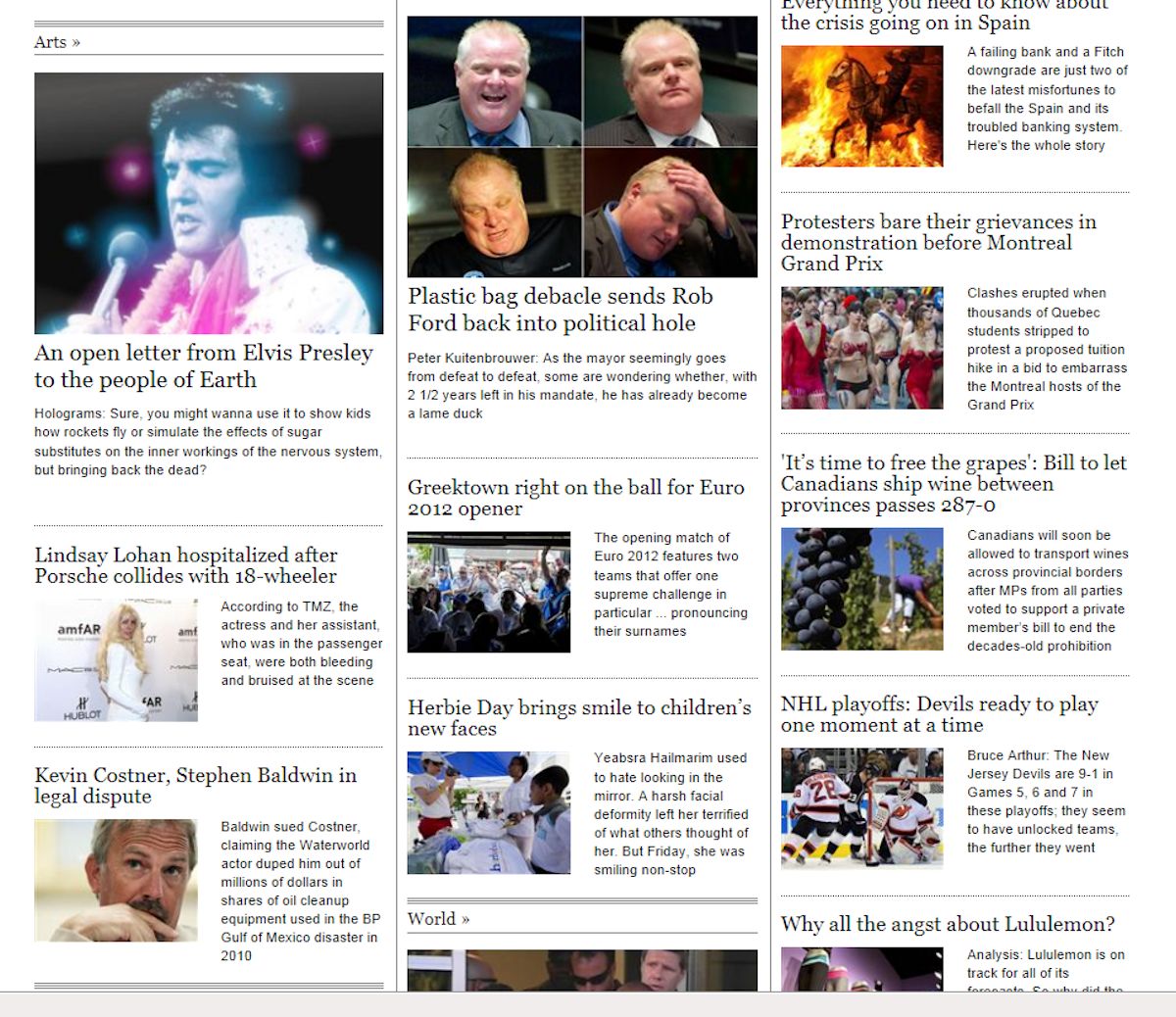 Not that the HuffPost is alone in dumbing down its content for a less discriminatory, less intellectual audience, although it is arguably the worst, with more pure crap on its front page than any other news site I visited.

The National Post has a section called “arts” in which it places front page trivial pap about Lindsay Lohan in a car accident, a legal dispute between two actors and an “open letter from Elvis Presley.” Gossip and minor events in the lives of actors is not news and it isn’t anything to do with the arts. Car accidents may be entertainment for some twisted souls, but the majority does not see them as having any cultural or artistic merit. 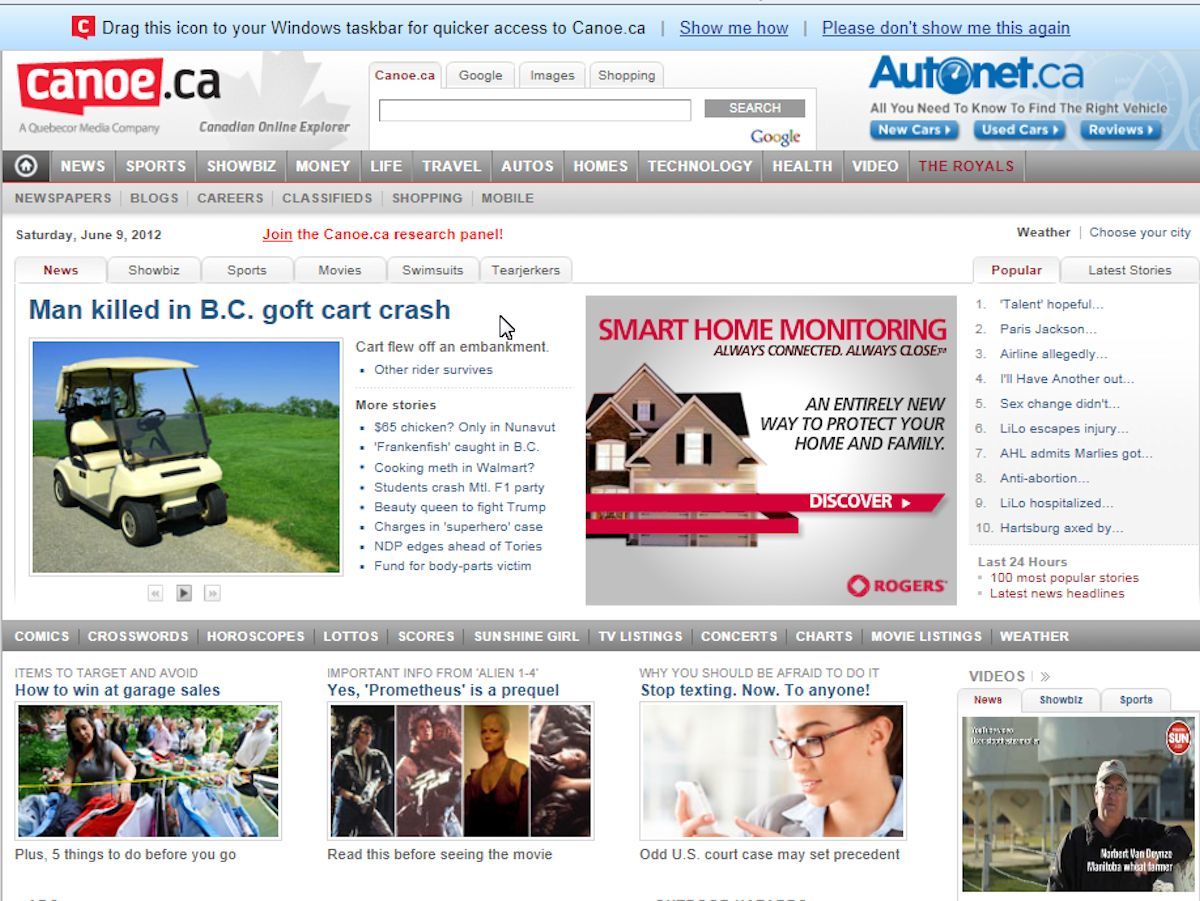 Canoe, the Quebecor home site, opens with some minor news pieces, but uses a media player to move you quickly to trivia categories like showbiz, movies (why this is not in showbiz is a mystery), swimsuits (an entire category of stories!) and “tearjerkers” where dumbing down is elevated to a new standard. The front page has stories about garage sales and movie trivia. The main news story today is “Man killed in B.C. goft cart crash.” Yes, it says “goft” cart, not golf cart. You have to actually hunt for real news like the latest massacre in Syria.

None of this reduces my impression of Quebecor as the bottom of the intellectual barrel in the Canadian media industry, of course. Just reinforces it. My overall attitude is that QMI is the only news agency that makes the trashy Fox network look moderate, and the old News of The World look relevant. 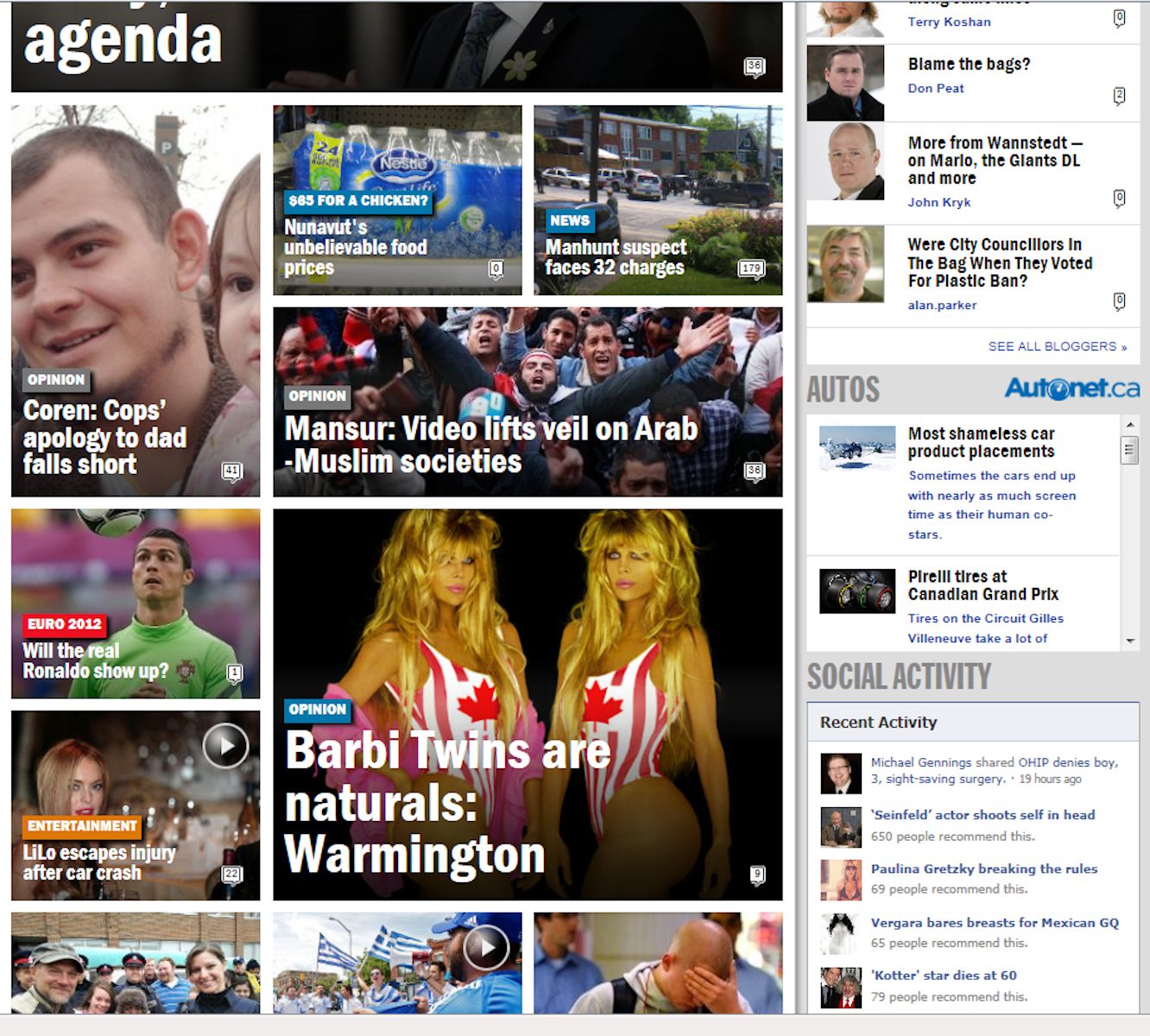 The Sun newspaper is, well, just what I expected from a newspaper that has more about sports, gossip and sex than it has news or anything important. I’ve never had a high opinion of the Sun ever since it started, mostly because of its uber-right editorial stand. But unlike most traditional media, it hasn’t gone downhill in its content. Of course, it hasn’t improved, either. The Toronto Sun’s website features several irrelevant front page “celebrity gossip” pieces, and more sports than news. Sports may be important to some, but it isn’t news and should not push out real stories.

Huffpost is, unlike the NatPost or the Sun, mainly a news aggregator, so it pulls stories from other sources, and doesn’t create much of its own (blogs are opinions, not news). In that, it can’t be blamed for the quality of the items, but simply for the choice. Similar aggregator sites like National Newswatch and Bourque exist, with varying amounts of crap pretending to be news. Midway down the National Newswatch page is a story in the “E-zone” (for e-diot?) is a fluff piece with the headline, “Stop everything: Selena Gomez is talking about Justin Bieber while wearing a bra,” followed by links to other, similar pap. To be fair, though, the site has a greater news-to-crap ratio than the HuffPost. Bourque sticks to the headlines and pushes the fluff way down to the bottom.

I’ve heard the argument that the media only provides what people want. That’s nonsense and one of the bulwarks the increasingly right wing, ideologically-fixed media depends on to continue its war on intellectuals and non-right thinkers. Media provides either what it THINKs the public wants, or what it thinks the public SHOULD want.

No one wakes up in the morning thinking they want to get more stupid. Media corporations provide this trivia not to meet demand, but to create it. Ideologues don’t want informed, intelligent consumers. Informed people make better choices than uninformed ones and are not as likely to follow the script. The right’s entire argument about Medicare in the US has been phrased in terms that make it a hate crime to reason, to think critically and to question the “authority” of the right’s pundits who decry providing public medical services instead of holding people hostage for basic medical care.

Information diabetes. That’s what the right-leaning media has, and wants us all to contract through an obesity of irrelevancy. To be fair, there are well-informed people on the right, but not as many as there are on the left. That’s because of the basic difference in how each political stripe sees information. The left sees it as something to share and exchange. The right sees it as proprietary, private and secret.

A recent Gallup poll highlighted the effect of dumbing down media with tripe: only 15% of Americans believe in the evolution, but 46% believe in some form of creationism. That would not happen with a better-informed public. People are not usually intentionally so stupid, but there are those in power who intentionally try to make people stupid. Rather pointedly, the vast majority of creationists also side with the right, while those on the side of science and fact are mostly on the left.

Dumbing down is done through the media by replacing content with fluff, by pushing pseudoscience and superstition, gossip and salaciousness to the front page instead of science and research, or instead of hard news and empirical data.

Who will pay attention to climate change, the oil sands, or the civil war in Syria when the front page has voyeuristic shots of some almost-dressed starlet showing cleavage, or something salacious about a TV wannabe with a childish name like Snookie? Who will turn to images of civilians being shot or streams awash in toxic oil spills, when you can look at a star in a bathing suit? Thinking people, of course will, but the point of this dumbing down is to hide the real content under a torrent of irrelevant pap, deep enough that the average person – with an attention span conditioned by TV watching to be shorter than a gnat’s – won’t bother looking that deep.

As Johnson writes in The Information Diet, there’s no such thing as information overload; it’s more like an imbalance of information quality. The good data is in shorter supply than the dreck. In the same manner, obese people get that way not necessarily because of the quantity of food they consume; rather it’s the result of the quality of the food-like substances they eat.

Newspapers aren’t alone, of course; it started with TV. Channels like Discover and History promised content only to quickly become broadcasters of unbelievably stupid and anti-intellectual content. Just a look at the crap that TV dishes out daily can give anyone with an IQ over 80 a headache: Natural Born Dealers, Canada’s Worst Driver, Cash Cab, Believe It or Not, Storage Wars, Cake Boss, What Not to Wear, Pawn Stars, Canadian Pickers, Jersey Shore… just a few of literally hundreds of TV shows meant to dumb down the audience and keep people in an uninformed stupor. There are so many truly inexorably bad TV shows like these that I can’t even begin to list them all, let alone comment on how bad TV has become. I’ll have to leave that for another post.

But is there a cure for information obesity? Yes: focus, stop wasting time on crap, turn off the TV, exercise your mind and go back to reading books.