If there is one good thing to come out of the election of Donald Trump, it has been the renewed interest in a certain genre of literature. Sales of dystopian novels have skyrocketed on Amazon, in particular what might be called “The Big Three” of dystopian tales: George Orwell’s 1984, Aldous Huxley’s Brave New World, and Margaret Atwood’s Handmaid’s Tale.

From each of these novels, allegorical threads can be woven into some narrative aspect as a metaphor for the Trump administration: 1984’s newspeak, media manipulation and paranoid Big Brother; Brave New World’s elites-vs-savages mentality, exiled intellectuals and its psychological manipulation; Handmaid’s Tale misogyny and control of women’s reproductive rights.

But only in Bernard Wolfe’s 1952 dystopian novel, Limbo 90, did I find a metaphor for Trump’s followers (it was also published in the USA titled simply Limbo).

Wolfe’s novel is set in what was for him a dimly foreseeable future: 1990, after the atomic-bomb destruction of WWIII. An American, he was writing during the early years of the Cold War and blossoming Red Scare: the pinnacle of the McCarthy witch hunts. In his imagined future, Wolfe pictured the Soviet and Western Blocs still surviving, at least ideologically, but changed by the war.

What has changed most is society: after the latest conflict that devastated so much of the world, the populace grew so weary of war that pacifist politics came to be the norm. But pacifists became radicalized. Words alone didn’t count (although there are plenty of anti-war slogans around): you needed to prove your resistance to war. And the only way to do it was to have a limb voluntarily amputated. Or two, three, four… to become a Vol-amp.

For some, the lost limbs were replaced by prosthetics, worn with pride to show off their dedication to the pacifist principles. The more radical eschewed the pros entirely and simply lumped in baskets, limbless, passive, and immobile: the Immobs. Amputees of both sorts are now in the majority of males. (Women don’t follow suit because in Wolfe’s time, women were not allowed into active military service, and people of colour are pretty much reduced to servitude.).

Trump’s followers didn’t amputate their limbs, of course, but they did amputate a part of themselves. Or rather parts. They amputated their reason, their intellect, their empathy, their logic, their critical thinking and skepticism. They voluntarily stopped thinking and became intellectual Immobs, no less passive than those in Wolfe’s tale. You can see the metaphor here. 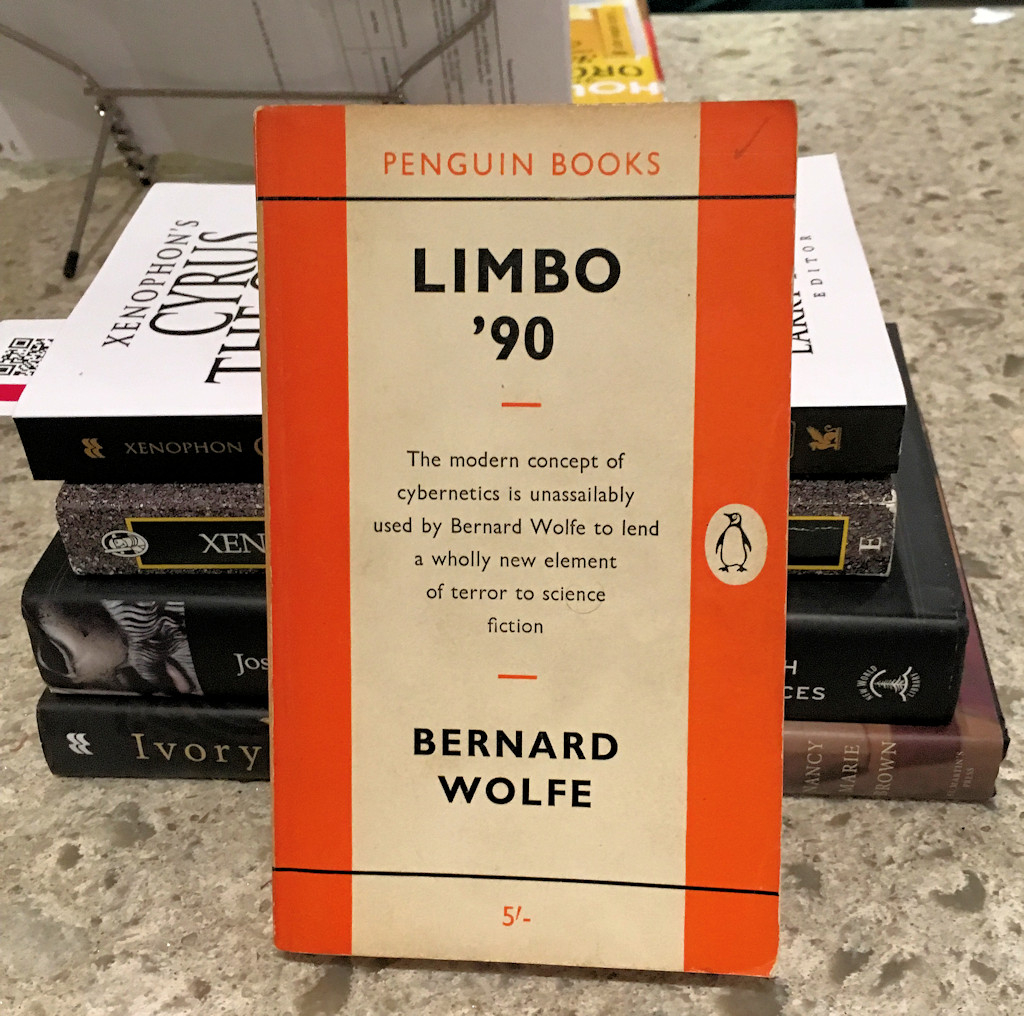 The protagonist of the story is Dr. Martine, who fled near the war’s end to an island where he spent the next 18 years lobotomizing natives to rid them of aggression. A metaphorical mix, one might argue, of Steve Bannon, Betsy DeVos and Sean Spicer; Trump’s ideological surgeons, slicing away the people’s ability to reason, to think for themselves. They want to replace critical thought and analysis with blind faith in the leadership. Unlike them, however, Marine has an epiphany.

The other main protagonists are the amputee leaders of the two blocs: cynically manipulating their followers towards their own designs and agendas. Sound familiar?

There follows the inevitable return of human aggression. The old conflicts continue along the same ideological lines, just directed by the two hypocrites. The anti-war prosthetics are armed: they have guns and other weapons in them. The Immobs who refused the prosthetics become helpless victims of their own passivity, of their own failed ideology, and their blind faith in their conniving leaders.

As Machiavelli wrote in Chapter VI of The Prince:

Hence it is that all armed prophets have conquered, and the unarmed ones have been destroyed. Besides the reasons mentioned, the nature of the people is variable, and whilst it is easy to persuade them, it is difficult to fix them in that persuasion. And thus it is necessary to take such measures that, when they believe no longer, it may be possible to make them believe by force.

In this case, the Immobs were literally “unarmed” and “unlegged” too. Their failed ideology makes martyrs of them.

The term “dystopian” refers to an “imagined place or state in which everything is unpleasant or bad, typically a totalitarian or environmentally degraded one,” as one definition defines it. Since few writers have proven very adept at predicting the future in a truly meaningful way, most dystopian novels are thinly-veiled commentaries on contemporary politics, mores and society. Such is Wolfe’s novel and it’s best to read it with an appreciation of the Cold War and the post-war societies.

I first read Limbo 90 in 1972, two decades after it was published. The images of the Immobs and their deliberate amputations and mutilations disturbed me enough that they surfaced in my memory now and then over the years.

I recalled the book again only two years ago. My first association between the amputations of the Immobs’ limbs and the amputation of reason and intellect came not simply with Trump’s rise and the mindless populism that followed, but with The Block on our own council. If ever a group had metaphorically put itself into an ideological basket – lying there intellectually passive, immobile, and inactive – it was this lot. I think I might take to calling them The Block Immobs in future. And it’s easy to see familiar faces in town hall among Wolfe’s Machiavellian, hypocritical leaders.

Wolfe’s novel is a pastiche in many ways – a stirring together of a stew of ideas taken from psychology, cybernetics, philosophy, politics, anthropology and religion. It tends to meander a bit, become pedantic at times, and the writing and storyline are sometimes uneven (I felt the end was unsatisfying and incomplete). Plus, it’s a bit uncomfortably misogynistic and politically incorrect in places (think: America, 1952, before civil rights or feminism).

But still, there is an allegory in it, and a metaphor for today’s politics – that of the deliberate amputee, the willfully ignorant and his or her fate. You should read it for that.