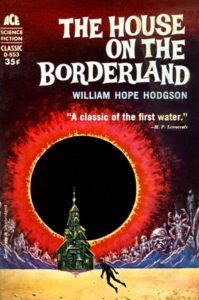 “But for a few touches of commonplace sentimentality [it] would be a classic of the first water.” So said H. P. Lovecraft of the 1908 novel, The House on the Borderland, by William Hope Hodgson. But, Lovecraft admitted, the book was also a major influence on his own, later work. And for good reason: it created the ‘unknown horror’ effect that Lovecraft (and later writers) exploited so well.

House on the Borderland is a seminal work in its genre and, despite its age, deserves not to be forgotten by modern readers. Here’s a passage from the book:

And then, as I peered, curiously, a new terror came to me; for away up among the dim peaks to my right, I had descried a vast shape of blackness, giantlike. It grew upon my sight. It had an enormous equine head, with gigantic ears, and seemed to peer steadfastly down into the arena. There was that about the pose that gave me the impression of an eternal watchfulness—of having warded that dismal place, through unknown eternities. Slowly, the monster became plainer to me; and then, suddenly, my gaze sprang from it to something further off and higher among the crags. For a long minute, I gazed, fearfully. I was strangely conscious of something not altogether unfamiliar—as though something stirred in the back of my mind. The thing was black, and had four grotesque arms. The features showed indistinctly, ’round the neck, I made out several light-colored objects. Slowly, the details came to me, and I realized, coldly, that they were skulls. Further down the body was another circling belt, showing less dark against the black trunk. Then, even as I puzzled to know what the thing was, a memory slid into my mind, and straightway, I knew that I was looking at a monstrous representation of Kali, the Hindu goddess of death.

You can read or download a copy at Gutenberg.org. It’s not very long – just over 50,000 words, and is a fairly quick read.

Hodgson – whose 140th birthday was celebrated by fans last November (the 100th anniversary of his death is in April, 2018) – was prolific in his lifetime, but is an almost-forgotten figure these days. Only two of his novels – the other being The Night Land (1912) – got any significant attention or popular reprints for many decades after his death. Thanks to the internet, digital files and the magic of on-demand publishing, a lot of his work is available online; five of his novels are now downloadable from Gutenberg. And this slowly growing popularity has seen a few publishers reprinting many (maybe even all) of his works.

While still in the shadows compared to other writers, he is read today by fans of classic horror and early scifi. But he’s not anywhere near a popular writer. In part that may be because better, subsequent writers like Lovecraft, Lord Dunsany and Edgar Rice Burroughs captured (and continue to capture) the public’s imagination. Plus, they wrote about the modern, post-war world: with radio, cars, telephones, movies, steamships and the like. They are easier, I suspect, for modern readers to comprehend than those from the Edwardian era.

Perhaps it’s also because Hodgson was good, but not a great writer. He had great ideas, and conveyed terror in a way like no other before him. But sometimes his writing was dense with late Victorian-era bombasity and purple prose. Hodgson wrote pre-WWI, and reading him today sometimes feels a bit fusty and stilted. Wikipedia notes:

According to critical consensus, in these works, despite his often laboured and clumsy language, Hodgson achieves a deep power of expression which focuses on a sense not only of terror but as well of the ubiquity of potential terror, of the thinness of the invisible boundary between the world of normality and an underlying, unaccountable reality for which humans are not suited.

Hodgson opens with a popular (and by today’s standards stale) literary trope: a found diary that details the story to follow. In this case it is, “From the Manuscript discovered in 1877 by Messrs. Tonnison and Berreggnog in the Ruins that lie to the South of the Village of Kraighten, in the West of Ireland. Set out here, with Notes.” Personally,I found the notes to be superfluous and distracting (and I’m a reader who reads every endnote and footnote in Gibbon et al). Plus in fiction they seem contrived.

I first encountered Hodgson’s House on the Borderland in the Ace paperback edition shown above, sometime in the early-to-mid 1960s. By that time, in my early teens, I had already discovered science fiction and fantasy, and was an avid reader of the genres, already building my own collection of paperbacks, with my own favourite authors.

I started reading these types of fiction a few years earlier, around the age of 10-11 when I got my first Tom Swift Jr. books for Christmas. I was also keen on the B&W scifi flicks shown on TV then. I still recall the awe I felt, standing in our backyard in October, 1957, seeing the tiny light of the first Sputnik cross the sky. That led me to read science and, of course, science fiction, a passion for which remains with me today.

My mother’s long hospitalization at that time required me to travel after school to the local public library, a few blocks away, where, for many months, I spent a few hours hours each day until my father got off work and could pick me up. I quickly read outside the small “children’s” area, passing through a meagre young adult shelf (back then there was no large collection called ‘young adult’ as there is today, merely a shelf for older boys and girls) then into adult material. I first read Darwin around this time, too.

I also discovered Edgar Rice Burroughs’ tales. I had read Tarzan before this: a copy of the first novel that belonged to my father, but soon found the delights of ERB’s Barsoom, Pellucidar and other tales on the library shelves – some of whose books I have re-read several times since (and still have my own copies, on my bookshelves).

Hodgson was an outlier, though. He wrote adventures, but House was a sombre, dark exploration with little action but a lot of observation and cogitation. It was scary, but not in the modern horror film sense: no jump scares; more a brooding menace that makes you look twice at shadows and dark stairwells. The sort of things that you lie awake in the dark at night, thinking about.

I bought his book at a local convenience store that had a revolving rack of ever-changing paperback books; a mix of westerns, romances, detective stories and sci-fi/fantasy. With my thin allowance, I bought my Doc Savage novels there, my ERB novels, and some Ace Double books (printed with one novel on one side, then you turned it upside down and backwards for the second). Ah, for the days when convenience stores sold books.

Most of this stuff on the rack was still pulp-era fare; space opera churned out by contract writers, although many of the books proved to be reprints of earlier works from the “Golden Age.” But there were also the greats in among them at times: Clifford Simak, Lester del Rey, Alfred Bester, A. E. Van Vogt… I wasn’t picky: I bought them all, all I could afford that is.

Hodgson didn’t interest me at first because I hadn’t developed a taste for horror, but I kept looking at the cover and reading the jacket copy. It intrigued me enough that one day I plunked down my fifty cents (the Canadian cover price, as I recall, and no taxes on books then) and took it home. And I still remember the effect it had on me. Enough that I turned to reading Lovecraft and other writers of the genre. However, I still preferred scifi and, to a lesser degree, fantasy (and still do).

Hodgson’s unsettling descriptions of the “swine things” and the bizarre creature at the end of the universe were vivid enough that, although I can’t recall his exact words more than five decades later, the impressions they conjured up stay with me even today. And when I recently started re-reading House, I found I had a sense of uncomfortable, edgy anticipation, the residue of my first encounter with it.

So if you’re in the mood for some classic horror, I suggest you take a look at Hodgson. While you’re doing that, I’ll be downloading and printing those other works of his.