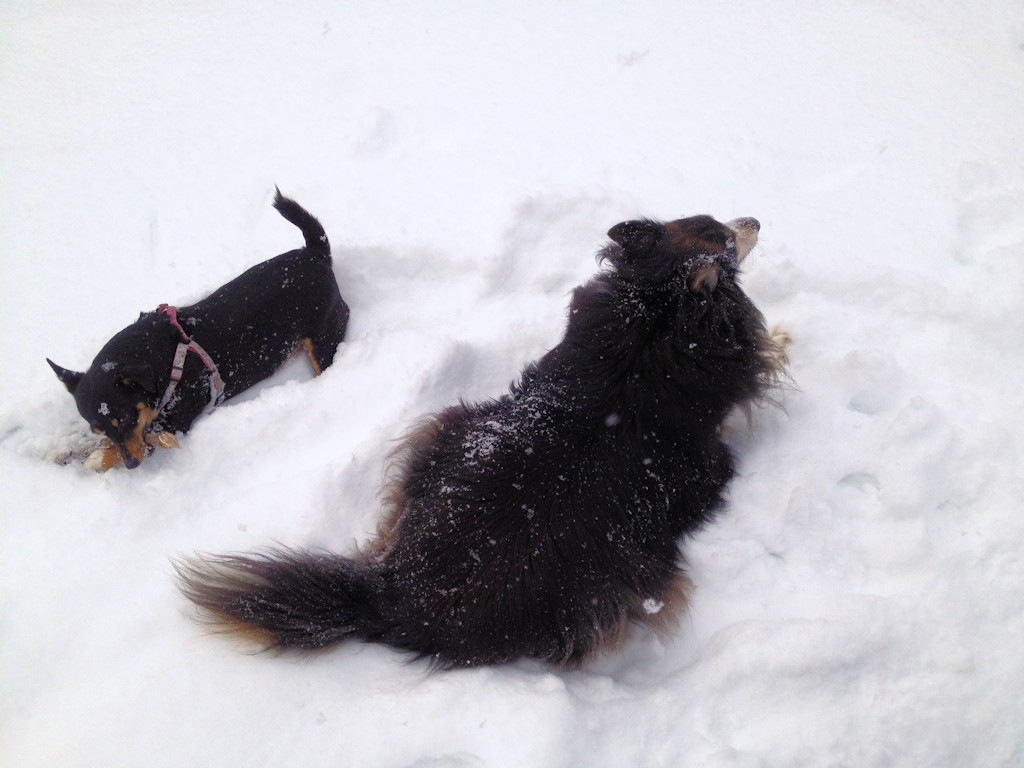 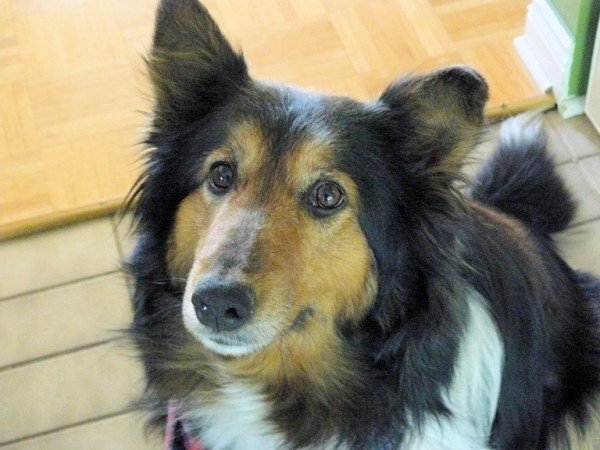 I arranged for the officer to hold her until the evening when Susan could join me. As soon as she saw the dog, Susan was in love with her. Sophie, she called her. We never regretted it for a moment after. 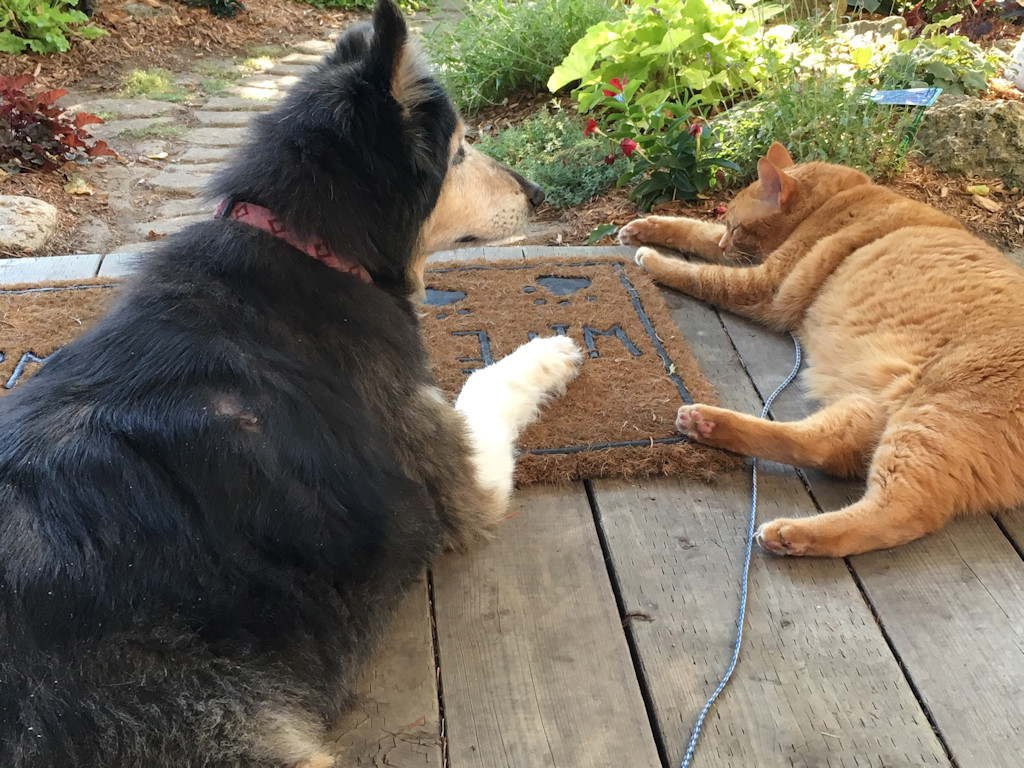 We took Sophie home. We weren’t sure how she would get along with our cats, but she ignored them and they soon ignored her, too. They were comfortable around her because she was so calm. She had, we later learned, lived in a house with a cat (also abandoned…). In warm weather, when When we sat outside, Sophie sat or lay beside the cats, enjoying the company.

The day after we took her home, our vet gave her the necessary examination and vaccinations, and we arranged for her to be spayed. Best guess for her age was around six years old. Mature, but still with lots of pep in her. We always wondered what happened to her pups, but never found out. I suspect the former owners were just backyard breeders, not interested in their pets as much as in the cash.

Sophie walked with me to the store almost every day for the next two years while we still had the business. Only when it was too cold for her (and me) did she either stay at home or ride in the car with me. In the store, she sat behind my chair, protectively. When she was up, she greeted everyone, but never barked. I took her for walks around nearby Harbourview Park several times a day. On weekends we walked along the trails and parks.

While walking along the trails in that first summer, Sophie slipped her collar and dashed into Black Ash Creek where she swam with obvious pleasure. I hadn’t expected a longhaired dog to enjoy swimming that much, but she loved it. After that, we took her to the bay several times every summer and waded out with her. She’d chase sticks in the water, paddling out to get them, but she really never got the whole return-them-to-me thing. She just liked the chase and swim part.

She loved snow even more. She would roll in it at every opportunity, diving into it with abandon. She ate it, played in it. Winter was her season. I suppose with that long coat, she was cooler in winter.

At home during the day, she slept under the table where I work, or on the doormat nearby. If I changed rooms, so did she. At night she climbed the stairs and slept on a mat beside the bed. She was always there, never far away, never out of sight. 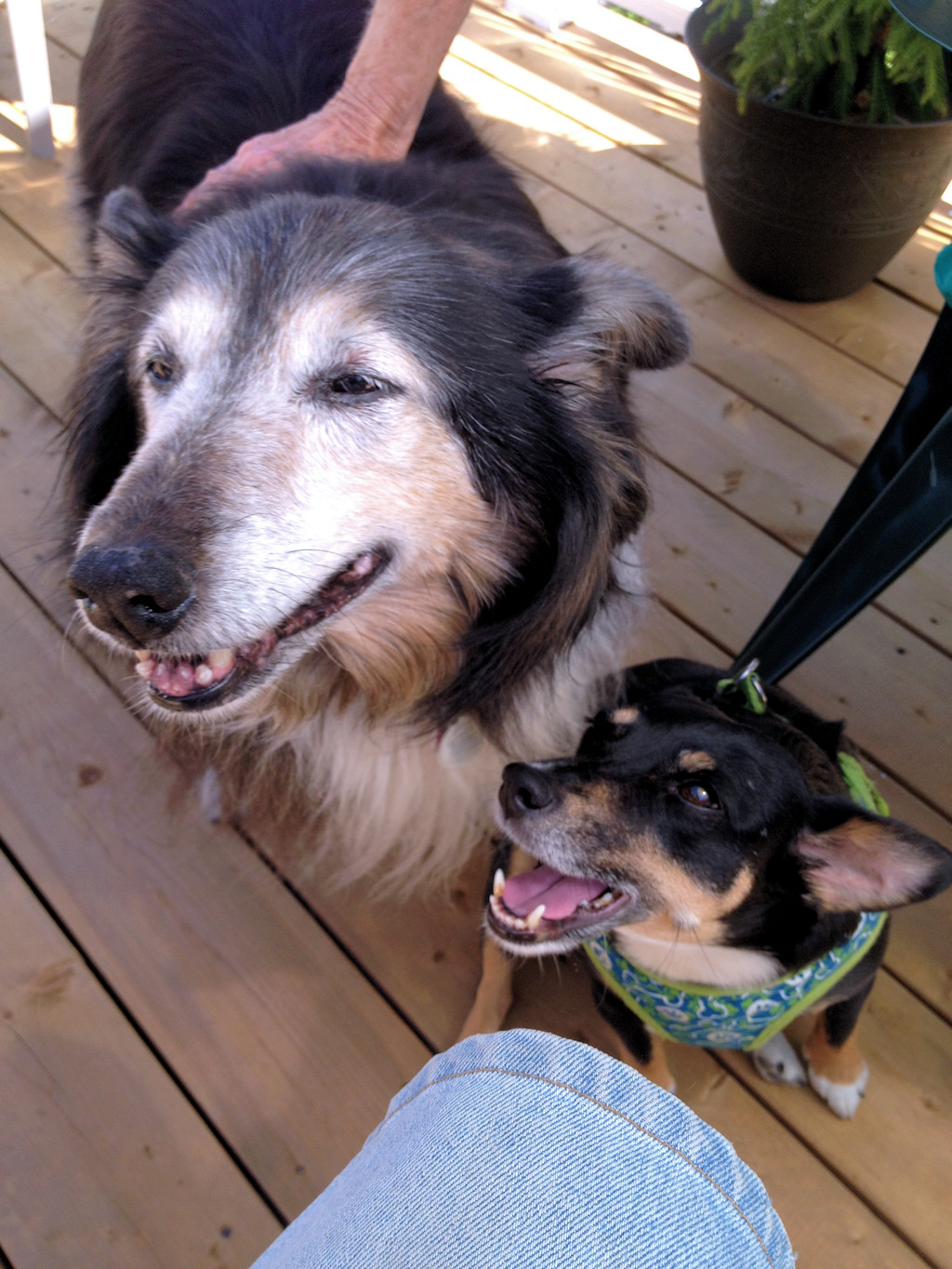 As Sophie aged, she slowed down – as we all do – so I took along a book or an MP3 player to listen to audiobooks and podcasts so she could ramble at her own speed without me pressuring her to speed up. With me working from home, I was glad of the opportunities to get up and walk – I am too easily prone to work at the computer. Sophies gave me the impetus to keep moving.

Hot summers were trying for her, so a few times we had her shaved down to about 2.5-3 cm. She seemed to like that: it allowed her to be cool. Her fur always grew back over the fall and winter. Summer walks were always shorter in the heat of the day.

Four years ago, we got Bella – a Jack Russell cross and another rescue dog, this time from the Humane Society. We hoped having a younger dog around would encourage Sophie to be more active, play more. And it worked – for a while. But they weren’t really friends and Sophie now preferred quiet time over play. She seldom moved at much more than a slow walk (unless there was food at the end of it).

We went for long walks around the neighbourhood and accompanied Susan on her walks to work, even when she moved to a downtown building – at least for a while. But Sophie started showing signs of arthritis, and eventually the walk became too much for her. Last year, it was only Bella who accompanied us.

By mid-2016, our walks with her had become restricted to a few nearby blocks, which was about all she could do. No more treks downtown, but we still took her around the neighbourhood. She slept a lot more and getting up and down stairs was becoming a problem.

In late winter, 2016, we noticed a mass developing on her chest. It proved to be a cyst – apparently benign – but one day in February, she fell on it and it burst. We rushed her in for emergency surgery and removal seemed to go okay. She recovered, or so we thought. Then a week ago we noticed the swelling. Her face was puffy, her neck glands enlarged. Something was wrong. We took her back to the vet.

It wasn’t good news: possibly an infection, but more likely lymphoma, a fatal cancer. We put her on antibiotics in case it proved an infection, but after several days they had shown no effect. And she was getting worse. The swelling increased. She had to work at simply getting up and panted from the effort of simply going as far as the curb. I had to carry her upstairs the last few nights, not an easy task with a 23kg dog. She was in pain – you could tell by the stiff way she walked. And it would only get worse. We knew what we had to do. 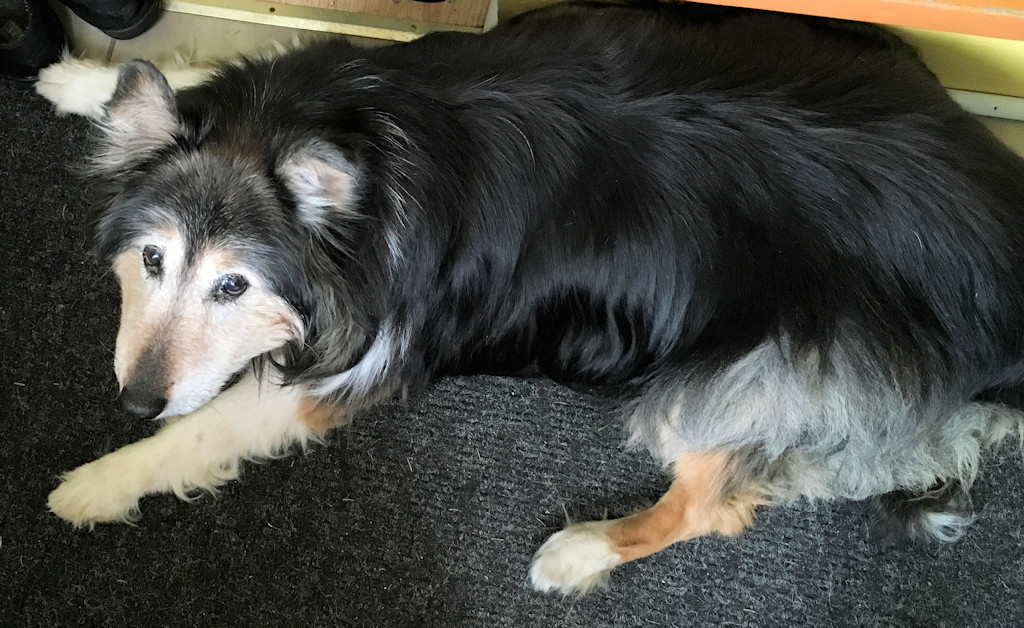 On the first day of spring, 2017, we took her for her last walk, a slow, stumbling trip only a dozen metres or so. Then we bundled her into the car for her last ride, to the same vet’s office where we first took her.

We sat with her on the floor, petting and talking to her, as she was sedated and injected. Then we cried our hearts out for this wonderful, gentle, loving dog we would never see again.

Her absence is a hole in our hearts. I still look at my feet when I work, to avoid bumping her under the table. I get up in the night and look down to see if she’s sleeping on the mat. I call her name when I get up to walk Bella. Then I remember. And I always will. She was a big part of our lives.