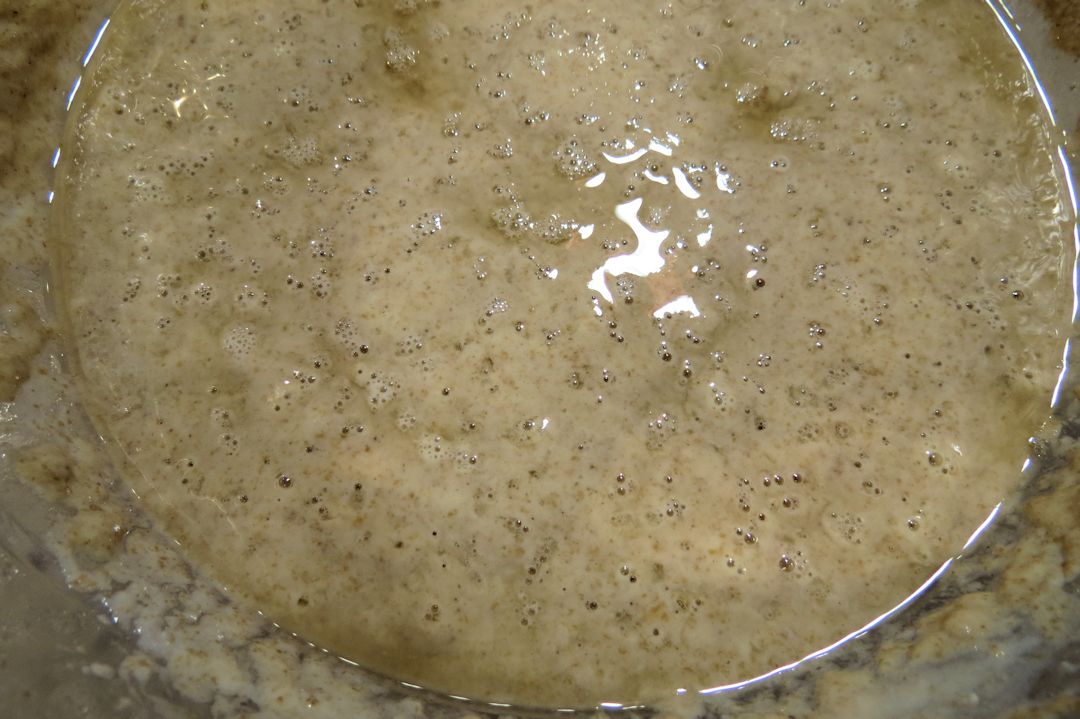 I began a levain last week (Nov 19) and it seemed to go well at first, but then it just seemed to have stopped… or slowed to a crawl. Was is dead? Or just dormant? Did I have a welcome guest growing in the bowl or was it a wet mass of unwanted invaders? Am I too anxious and not patient enough?

Sourdough bread has been called the “Everest” of breads, which I realize refers not to its towering presence but because it’s so damned hard to conquer. Getting it started seems a combination of art, science, animal husbandry and sheer luck.

Yes, animal husbandry, defined by Wikipedia as: ” the dynamic set of relationships between humans and the non-human animals, in which qualities considered to be advantageous to humans are emphasized and further developed.” Yeast is one of the oldest domesticated creatures, at least 7,000 years serving humans (although there have been fascinating arguments that yeast domesticated us, not the other way around).

I read about a dozen methods, all different, suggesting a range of approaches from absolutely basic to multi-stage methods that would make NASA engineers blanche. Being a bear of simple means, I opted for the simplest approach.

A digression: sourdough and levain are synonymous, but purists tend to reserve the term sourdough for those made in San Francisco because of the marketing and branding of that particular blend. But amateurs like me happily confuse the terminology and substitute one word for ‘t’other. Both refer to a bread made from a wild yeast and lacidophilus bacteria colony in a dough starter. Besides levain has a cachet; anything French in cooking seems just so much more sophisticated, although in reality the sourdough technique is itself ancient and the source of most peasant breads.

The starter depends on a complex micro-ecology of wild yeasts and bacteria competing for a food source and there’s always a fair chance the unwanted kind will win the battle. Plus there’s the opportunity for moulds to colonize it. It depends on the flora and fauna in the very air we breathe, so it’s a capricious way to start anything. Your home is full of these little creatures, and so is the flour (more are found in organic, wholewheat, rye or unbleached flour, I discovered). All you need to do is provide them food and water. The food is the flour.

After researching levain and sourdough online, in YouTube videos, and in my (as yet limited collection of) baking books for a while, I started with what now seems a lot much larger batch than I really needed at first:

Note to self: About a quarter of that would have been fine. A large starter provides a huge volume of material to colonize for the little critters, and provides more space for competition to take hold. And it will take much longer for the wildlife to spread sufficiently through the mass for it to be used in baking. Next time…

The small amount of malted barley is merely to encourage the yeasts to eat (the enzymes act as an accelerator). I learned afterwards it’s not necessary. Oh  well…

Our water here is good – low chlorine and low mineralization. I boiled it first to let it shed any remaining chlorine (and then let it cool to just over 100F, which cooled further when added it to the flour). I didn’t want to risk killing anything off with either chlorine or scalding. I could have used bottled water, I suppose, but in the long run that’s not a sustainable practice.

It seemed to get started fine, this micro-colony – small bubbles, a small amount of brownish liquid on top now and then (alcohol, I believe, the natural result of fermentation). It smelled okay for most of the time, but that’s both subjective and imprecise. But it didn’t get really active, although it never showed any signs it was ill (no discoloring).

On Nov 22 I fed it with 250g unbleached flour/250g water after removing that amount of starter from the bowl. It seemed to be active still, after the feeding – and the smell was okay three days on. Just not really active. Is it yeast in there? Or some invading, gas-producing bacteria just along for the free meal? I fretted.

I added some of the levain to a dough mixture yesterday to try and begin a bread, but it just made it mushy. It didn’t really take or rise. I put the dough in the fridge after a few hours. Not sure what to do with it – toss it out? Or should I take it out of the fridge and give it another chance?

My house is cool – could that be a problem? Yes, somewhat – yeast has an optimal temperature range and I keep the daytime house well below that. Note to self: consider making a proofing box…

Is it just slow or has it failed? I didn’t stir it until I fed it. Should I stir more often? How thick or runny should it be? So many questions…

I posted these and other questions on The Fresh Loaf forum and go at range of answers. Some were linked to more scientific comments about the pH levels suitable for yeast growth. Others were about practices, patience and preparation.

One reply linked to two intriguing (and lengthy) posts that explored microbiology of sourdough (first one here, second one here). I printed those and read them, along with their comments – about 40 pages in total! They describe some interesting microbial activity in starters, and the activity of other bacteria in the mix, as well as the timeline for colonization, and the yeast’s requirements for acidity (that’s where the pH level comes in).*

Others, however, suggested patience, more frequent feeding. Like with any pet, the yeasts and bacteria get hungry and want to be fed. Which I will do. I had thought of just tossing the mix and starting again, but I have been convinced to stay the course, feed it more frequently, and see what develops. It may take a couple of weeks, some folks suggested. Time to wrap myself up in some of that comforting Buddhist patience and wait.

So time to stop typing and start feeding. And get another bread started, too. A dough that’s been in the fridge since Nov 20 and was shaped into a boule this morning and rising (slowly) as I write this … and then get another dough started. Finish my speech for the upcoming conference. Copy my presentation to flash drives. Walk the dogs. Prepare some ukulele files for the next get-together.
Work, work, work, work…
[youtube=http://www.youtube.com/watch?v=xMOWYGrtY9c]

* In case you’ve forgotten your high school chemistry, as I had (and had to refresh my knowledge online), the pH scale shows a range of acidity and alkalinity. It goes from 0 to 14: lower numbers mean higher acidity; higher mean greater alkalinity. Seven (7) is neutral.

Human blood is somewhat alkaline at 7.5. Tomato juice is acidic at 4.5. Vinegar is 2.5 and lemon juice is almost 2; very acidic. The proverbial battery acid is one. On the other side of the scale, baking soda is about 8.5 and toothpaste is almost 10. Ammonia is 12: very alkaline.

Why this matters, according to the posts noted above, is that the friendly wild yeasts we want in the starter need a fairly acidic starter – around 3.5. Before it gets to that, other bacteria find it more hospitable. But they too have a range they don’t like, and die off if the starter drops below 4.5. The poster recommends “Lowering the pH in the initial mixture, by adding ascorbic acid or by replacing the water with pineapple juice, kept gas-producing bacteria from growing and brought about a more timely and predictable result.”

Which I will experiment with this coming week.