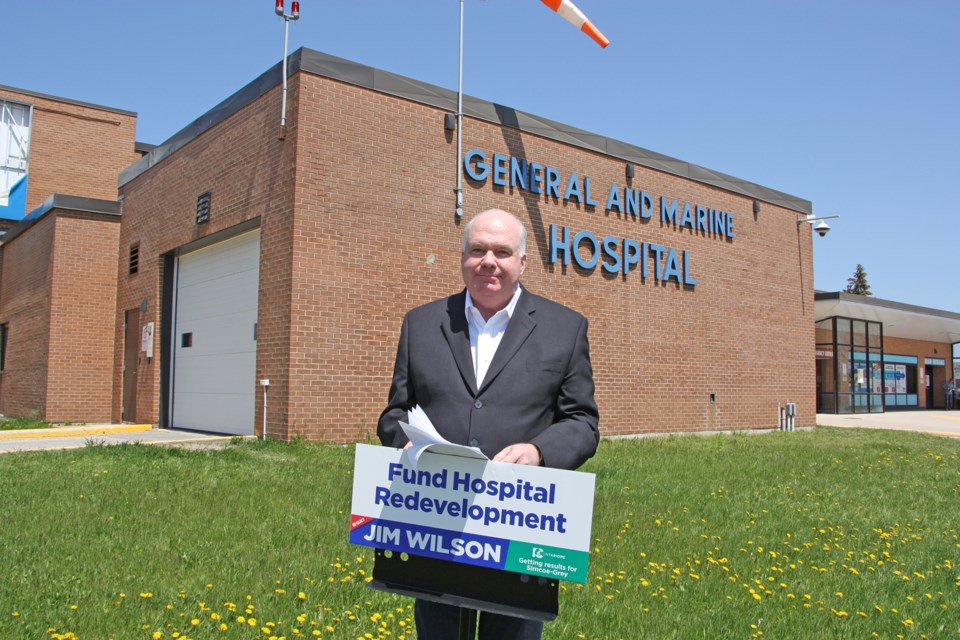 “I blame somewhat the local council,” said MPP Jim Wilson in this recent interview from the Peak FM about the continuing debacle of the hospital redevelopment. Well, so does most of this town.

“We’ve not had a clear expression to Queen’s Park from the community, other than myself and Norah Holder, the President and CEO of the hospital, indicating that we don’t think you can use any of the old building. And that’s what we’ll spend the $15 million dollars on, that the Deputy Premier and Minister of Health, Christine Elliott, announced this week, proving to Queen’s Park that the old building isn’t useable, especially after COVID… I’m retiring … someone will have to take the torch and the community will have to express their wishes much more clearly.”

Wilson is correct: blame for the hospital’s stalled redevelopment lies squarely on the shoulders of this and the former council, with particular weight for the debacle lying on Brian Saunderson for his opposition to it.

Elliott made the clearly politically motivated announcement earlier this month, likely in the hope of giving some faint leverage to their undemocratically-appointed candidate, Brian Saunderson, whose relationship with the hospital has been characterized by confrontation and opposition, followed by a hypocritical about-face pseudo-support to gull voters.* Even longtime Conservative supporters and voters have been at odds with him over his opposition since 2016 when the redevelopment plans were first presented.

I suspect Saunderson plans to use that funding announcement as a talking point in his favour — as if it was his project and his idea — when he abandons his commitments to the municipality to campaign for MPP. Never forget his opposition to the hospital, however.

But $15 million is a mere token gesture for a project that will cost over $500 million. And local residents won’t easily forget Saunderson’s role in blocking the hospital last term: without his opposition, we might already be several years into the planning and development of a new hospital. It might even be under construction now, if not for Saunderson.

Elliott herself said, “By expanding the current site, we will be able to maximize existing infrastructure during the initial development and prioritize departments that require immediate upgrades through new construction.”

This is bullshit, because, aside from Saunderson and his handful of sycophants NO ONE else in the region served by it wants the hospital to remain on the current site. It’s inefficient, it’s poorly situated, it’s a bad place for ambulances to get to, it’s barely accessibly by helicopter (and it might lose that access if the building is altered)***, it’s old, has limited space for growth, will lose most of its parking if expanded, and better re-purposed as a long-term care facility once the new site is built.

So despite some possible upgrades from the announced money, don’t expect much from that amount: much of that money will go to the Stage 2 planning exercise. You can also expect our neighbouring municipalities to lobby heavily for the new hospital to be located outside Collingwood’s unsupportive boundaries. (And, despite the announcement, I would not take it for granted until it landed in the hospital’s bank: governments have a habit of changing their minds after they make promises).

Note that Wilson — a diehard Conservative and longtime supporter of Doug Ford, despite having quit the caucus to sit as an independent (the conspiracy theories for this unnecessary move run deep…**) — did NOT pass the “torch” to the appointed, but much-disliked candidate, Brian Saunderson. Wilson left it up to “someone” and the “community.” Wilson didn’t even mention Saunderson once during that interview. Methinks he, too, is aware of and fed up with Saunderson’s blatant hypocrisy and naked ambition.

Saunderson, as readers know, was active and aggressive in trying to block the hospital’s redevelopment plans last term. Never forget his role in erecting barriers to it.

A bit of history: a developer bought up a lot of the properties around the current hospital and left them empty. If the hospital planned to grow on that location (a bad idea for many reasons), they would have to deal with that developer. That would likely have meant buying back the properties needed to expand, at what would be an inflated price. But the hospital wanted to move to a new, larger, site beside Georgian College, that had every advantage over the current site (size, future growth potential, better ambulance access, improved helicopter access, adjacent to Georgian College where classes train healthcare workers, built on FREE land, etc.). But Saunderson and his minions, including the former CAO, opposed it.

My sources told me last term Saunderson brought the property developer together in a meeting with hospital officials to pitch them on staying on the current site. Since he was working as a real estate lawyer at the time, one wonders what sort of conflicts of interest he was mired in over that meeting (he’s been involved in many conflicts this term). Last term, Saunderson showed disrespect and aggressive behaviour towards hospital officials making presentations in favour of the new site.

Wilson is wrong, however, saying that the community has not spoken out or expressed its preferences for the new site. There were numerous comments in local media and on social media, as well at a well-attended (standing room only) public meeting in March, 2017. At that meeting, the public’s desire for a new hospital on the proposed new site was made very clear and very loudly.

No, I’m not surprised that neither Wilson nor the government have paid attention to public comments or events in the past, nor, apparently, have they read even the flaccid local media stories about it, let alone my numerous blog posts about it.

As I recall, only Saunderson, the former CAO (Brown) and Saunderson’s abject council minions opposed the plan to move to a bigger, better site that had land generously donated to the new hospital for it, and they threw up roadblock after roadblock to prevent it.

And, rumour has it, hospital officials were called to a meeting with town officials where they were told that if they continued to recommend their proposed new site, that the town would “f*ck it up” for them.

For the sole public meeting on the issue, council used taxpayers’ money to bring in highly-paid outsiders to harangue and chastise the public for siding with the hospital about the better site. Council hired a sole-sourced consultant and a sole-sourced lawyer (surprisingly, not one from BLG, Saunderson’s former employers, who have had so much other sole-sourced business from council that he voted to approve…) who bloviated on and on about how great the old, inappropriate site was. And as expected, Saunderson and his cabal dismissed public comments and public sentiments and continued to raise objections and hurdles to the hospital’s plans.

In late 2020, Wilson asked for residents to write letters of support for the redevelopment. He later asked all councils in municipalities served by the hospital to pass a resolution supporting the hospital’s redevelopment. But, as he says,

In other words, Saunderson continues to manipulate his minions to block the best-possible redevelopment on Poplar Sideroad. Little wonder Wilson didn’t even suggest Saunderson would be the torchbearer after he retries. More likely Saunderson will do his best to undermine the hospital’s plans to move if he gets to Queen’s Park. Our hospital’s plan will continue to stagnate until he gets his way.

“Other councils: Wasaga Beach, Clearview, Blue Mountains, all were very clear they wanted to move to Poplar Sideroad, obviously in a new building” Wilson added. he also noted that staff at the ministry said they “can’t believe” anyone would want to redevelop the old site and “clearly you need a new hospital.”

Other councils, however, do not have the toxic presence of Brian Saunderson pulling the strings, nor a block of sycophants who do his bidding.

Now Wilson says what is needed is a rally by the public at Queen’s Park to protest the stupidity of redeveloping the current site. Hardly the best choice of action during a pandemic. Perhaps that might come once the lockdowns are lifted and we’re back to a safe world where such events can happen, but it may be too late.

In the meantime, I urge you, as Wilson did last year, to email Christine Elliott (christine.elliott@pc.ola.org and christine.elliott@ontario.ca.) and Premier Doug Ford (doug.fordco@pc.ola.org and premier@ontario.ca ) to tell them why the hospital needs to move to Poplar Sideroad and why redeveloping in the current site is just a bad idea. Please let them know the community is behind the hospital’s chosen site.

And maybe throw in a comment to two about why Saunderson is so disliked here.

~~~~~
* I was reminded of what Machiavelli wrote about Savonarola in a letter to Riciardo Becchi, March, 14982:

…he keeps on working with the times and making his lies plausible.

** Including: Was Wilson forced out to make room for the ambitious Saunderson? The popular Wilson would easily have won another term if he had remained in caucus, while the much-disliked Saunderson had to be parachuted into the candidate’s seat by Ford because he wasn’t likely to win the party nomination against the more popular Stella Ambler. Wilson resigned in late 2018, but it wasn’t until five days later that it was announced he did so over alleged accusations of “sexually inappropriate behaviour” made by “a male Queen’s Park staffer.” Yet nothing further was heard about that. Where did that anonymous accuser go? Why the five-day silence from Ford’s office? Why wasn’t the name of the firm allegedly investigating the complaint released? What was the sexual misconduct Wilson is accused of? Today, being gay would not likely have affected his standing in the riding, and might have even gained him support. Was Wilson set up? Sure looks like it.

*** I was told by a hospital official that helicopters have one single flight access route to and from the hospital. Because it’s in a residential zone, that access may be taken away by Transport Canada if the building is significantly altered to require the flight path to change. Now, when a helicopter lands, the hospital has to shut down its air conditioning to prevent exhaust fumes from entering the building, so there’s no airflow throughout the building. They can’t turn it back on until after the helicopter has left. This is more than just an inconvenience: it can cause serious complications during surgeries and for some patients.