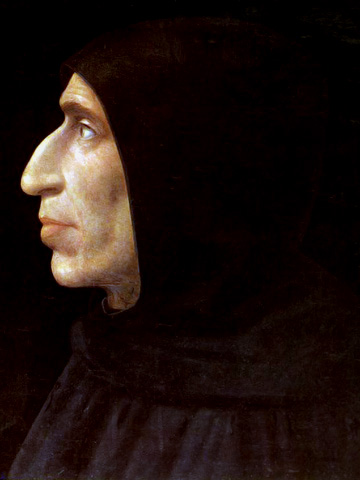 Machiavelli was above all a realist. He was also a historian and a keen observer of human behaviour. He knew what trouble could arise from the overthrow of the current ruler. Better the devil you know, I imagine him thinking.

Within his own lifetime, he had seen the Medici overthrown by popular unrest, and the Dominican friar, Girolamo Savonarola, take control of the city in reaction against the behaviour of the ousted rich and privileged.

Savonarola was charismatic but soon his strident, ideologically rigid theocracy proved more oppressive than the Medici rule, and he too was overthrown. Those who remembered Savonarola’s rule would not want to see it reborn, and that would create conflict with the new followers. Civil strife would follow – and above all Machiavelli treasured order and stability.

Machiavelli knew that a leader who rose on words alone would not be able to stay in power long. He called Savonarola the “unarmed prophet.” Machiavelli wrote:

If Moses, Cyrus, Theseus, and Romulus had been unarmed they could not have enforced their constitutions for long — as happened in our time to Fra Girolamo Savonarola, who was ruined with his new order of things immediately the multitude believed in him no longer, and he had no means of keeping steadfast those who believed or of making the unbelievers to believe.

However, that was almost a generation ago (Savonarola was executed in 1498 – The Prince was written in 1513, almost two decades later- although not published until 1532). Machiavelli knew the contemporary, fickle youth of his city had no experience of Savonarola: they might be swayed by a similarly charismatic strong man who promised to take back the city for them, to raise them and fete them.

And, he knew, such a theocracy would also be subsequently overthrown when the people tired of being repressed and wanted to go back to their leisure and their parties.

He would never have advocated a course of action that led to civil unrest and disorder, especially one with no clearly beneficial result afterwards.

Many populist movements have risen with a backbone of young people; those whose life experience has been too short to warn them of the dangers of unquestioning belief, but who yearn for answers to the complexities of life. They all too readily accept the words of a powerful, charismatic leader because it absolves them from having to work things out for themselves. They are willing to suspend their skepticism, their disbelief in exchange for the comfort and convenience of those answers. Once past their teen years, until they get their bearings and have life experiences, young adults are often more gullible to the blandishments of authority and charisma.

We saw that in the Communist movement of the early 20th century, the fascist movements of the 1930s, in the religious cults of the 1960s and 70s, in the radical Islamic cults of this millennium, and in the election campaigns of Donald Trump and the UK Brexit movement. In all of these, young men and women formed (and still form) a core component of the movements. It is far easier to radicalize someone who has little worldly experience, who has not developed roots or had a family, than who feels than a mature person who has a longer experience of the vagaries of life, and has more to lose.

It is also true of those who feel disenfranchised, unempowered by the bureaucracy or the government. It is easy to raise the ire of the poor, the homeless, the unemployed against the slights of entitlement and privilege. The Romans deflected the masses by games and spectacles; but throughout history, dictators have resorted to wars or internal conflicts to take the focus off their actions, themselves and their party. Trump is doing it today, albeit with less success or skill.

Machiavelli would not have wanted to see the doors opened for another Savonarola. Nor would he want to see another Medici come to power- perhaps one of the Poplani, or “popular” side of the family. The family returned to Florence with the backing of the pope. The Catholic church could as easily replace a fallen Lorenzo with another of his family. Or worse: replace him with someone from a different family – rivals like the Pazzi, Albizzi and Salviati, or even outsiders like the Orsini or Sforza. Machiavelli would not have wanted to see an outsider with no ties, no property, no vested interest in the welfare of the people brought in to rule Florence.

He would have understood that replacing Lorenzo could easily result in a worse ruler, and worsened conditions for the people of his beloved Florence. I doubt he would have written anything to encourage that.

No, I think Machiavelli was seriously trying to give the Medici serious and sound advice on how to rule, knowing that while unpalatable to the popular ideals of morality and ethics, what he offered was practical and efficient. It would lift the ruler above the pettiness of entitlement and greed, turn his focus from his own convenience and pleasures to the needs of governance. If followed, his advice would develop a strong, wise city state. Machiavelli accepted the means because the result would be that order and stability he cherished.
~~~~~
* For an interview with Benner, see 3am magazine

One thought on “Machiavelli’s Prince as satire”

The Prince by Chapter:

One of the earliest things most newcomers do when they get into office is to find a way to reward their friends and supporters, and thus both repay debts and make supporters obligated to you. In turn these supporters become your defenders in the community, because their rewards depend on you staying in office and [...]

I started reading Karl Marx’s Capital, vol 1. recently and that got me wondering about what similarities or differences there were with or between these two great political philosophers, Machiavelli and Marx.

Form my admittedly limited and autodidactic education in political theory, the first thing that strikes me is the scope. Machiavelli aims his works at [...]

Nothing, wrote Machiavelli in Chapter XXI: How a Prince Should Conduct Himself So As To Gain Renown, is as important to your political career as having a good reputation:

“Nothing makes a prince so well esteemed as undertaking great enterprises and setting a fine example.”

While those great enterprises are building the community, at the same time [...]

Chapter 26: The Forest and the Trees

Machiavelli’s last chapter in The Prince, Chapter XXVI: An Exhortation to Liberate Italy From the Barbarians, was a call to Lorenzo de Medici, Florence’s contemporary, but inept, ruler, to throw the foreign invaders out of the peninsula and unite Italy. He wanted Lorenzo to establish a “new order” in the land, and send the French, [...]