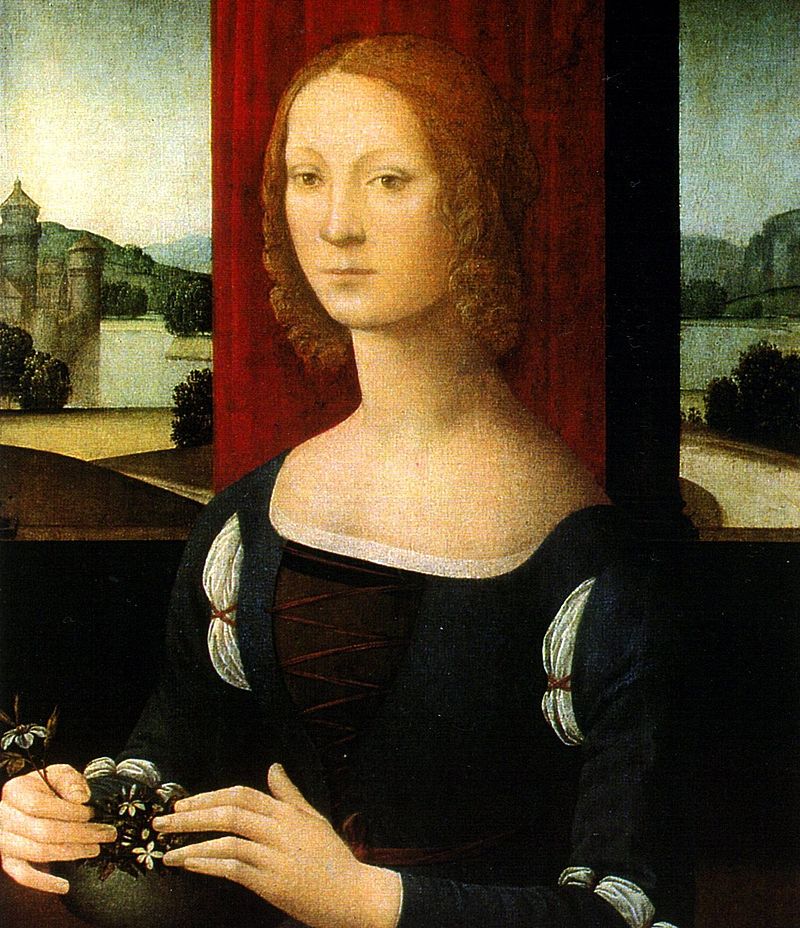 There’s a famous story about Caterina, the Countess of Sforza, told by Machiavelli in Chapter III of The Discourses. He tells a thinner, less explicit version in Chapter VII of The Florentine Histories. It’s known to historians of the period and place as the “skirt-raising incident.” The story would be repeated by other, later writers such as Francesco Serdonati in his 1596 book, Vite de cinque donne illustri italiene, in a biography by Fabio Oliva and again by Traiano Boccalini in 1612.*

Here’s what Machiavelli wrote of the incident in The Discourses:

Some conspirators of Forli killed the Count Girolamo, their lord, and took his wife and children, who were of tender age, prisoners. Believing, however, that they could not be secure if they did not obtain possession of the castle, which the castellan refused to surrender, the Lady Catharine, as the Countess was called, promised to the conspirators to procure its surrender if they would allow her to enter it, leaving them her children as hostages. Upon this pledge the conspirators consented to let her enter the castle; but no sooner was she within than she reproached them for the murder of the Count, and threatened them with every kind of vengeance. And to prove to them that she cared not for her children, she pointed to her sexual parts, calling out to them that she had wherewith to have more children. Thus the conspirators discovered their error too late, and suffered the penalty of their imprudence in perpetual exile.

It’s part of a longer story about Caterina and the Sforza family and their relationship with the town of Forli that is woven through The Discourses (and mentioned albeit without detail or this incident in The Prince.) Machiavelli appears to have been the first writer to change what was likely a gesture of defiance into a skirt raising, bringing sexual politics into the event.

Machiavelli’s original source was possibly at letter from Giovanni Corbizzi, one of Lorenzo de Medici’s correspondents, written in spring, 1488, at the same time the events were happening. Other contemporary records have similar reports of Caterina’s defiance and challenge, although none have the skirt raising until after Machiavelli.

But we know from several sources of the era that the bare bones of the story – Caterina’s feckless husband was assassinated by residents of Forli, she, her children and other family members were captured, and she convinced them to let her into the family castle to “negotiate” surrender with its loyal defenders, but once inside shouted her defiance from the ramparts and swore vengeance.

In an account from 1498, Leone Cobelli says she made “four figs” at them – the fig being a hand gesture equivalent to the “bird” or upraised middle finger of today. That might be considered obscene, but it is a far cry from raising your skirts to show your genitalia. Did Machiavelli invent the event or simply embroider it, taking his cue from historical sources?

And what about the contemporary records that say Caterina claimed from the ramparts that she was pregnant – carrying the heir who would rain vengeance upon the conspirators if they harmed her children? Or her claims she had her eldest child safely in the hands of a loyal ally who would carry out her revenge? Or that once in the castle, she had the bombards turned towards the town and threatened to level it if they harmed the children? Machiavelli doesn’t mention these, although other sources do, some of which were written during the events.

END_OF_DOCUMENT_TOKEN_TO_BE_REPLACED

I recently updated several pages, including the bibliography, after receiving several relevant books from online booksellers. I’m still looking for alternate translations of Machiavelli, and would appreciate any recommendations not already noted in the biblio. PDFs of older (non-copyright) works would be appreciated.

I made Demonizing Machiavelli a separate page after I updated it with information [...]

In the summer of 64 BCE, Marcus Tullius Cicero ran for the office of consul in Rome. It was a bitterly-contested fight.

His younger brother, Quintus, wrote him a letter – called the Commentariolum Petitionis –  to advise him how to win that election. That “Little Handbook on Electioneering” is today a classic of politics and campaigning in [...]

Machiavelli’s dedication in The Prince has often been overlooked or dismissed as merely a job application to the ruling Medici, a self-aggrandizing piece appended to the work. But in his book, Machiavelli’s The Prince: A Reader’s Guide, Miguel Vatter argues differently, and offers new insight into the dedication.

Before we reconsider the dedication, we need to [...]

In Machiavelli’s day, cities were usually defended by, and their armies composed of, two main groups: militia gathered from local people, and mercenaries, hired from other cities or nations. He called this Chapter XII: How Many Kinds of Soldiery There Are, and Concerning Mercenaries.

Armies in Machiavelli’s days were not just soldiers on the battlefield; they [...]

Choose your staff, and the councillors who will work closely with you, wisely. Make sure the people who represent your council and the municipality on important boards, or as your delegates, are up to the task, and will express your message – not promote their own agendas. Make sure your senior staff are people you [...]