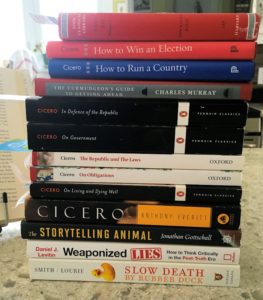 Twenty seventeen has a special significance for me, beyond merely another year in the ever-lengthening calendar of my life. I find it difficult, sometimes, to believe I am as old as I am – who, after all, lives this long? I used to think that. Back then, back in my salad days of my misspent youth, fifty was impossibly old. Sixty? Ancient. Beyond that? Methuselah old.

Or perhaps I simply don’t act my age. I still listen to the Beatles and the music of my youth, and play computer games. I still watch Godzilla movies and play tag with my dog. But my joints tell me a different story some days. What is it about time and age that we never see ourselves as others do? That wrinkled old guy in the mirror is someone else, I swear. The real me is killing orcs and invading dungeons online or running through the park with the dog.

As I age, however, I tend to grow more philosophical, and my attitudes about life and death have trended more and more to the Stoics of late. As I write this, a small pile of books by and about Cicero are stacked nearby (hence the picture above, shown with some other books I’m also reading). I haven’t quite found the meaning of life in the Stoics, but I do lean their way. And I sometimes find my own muse too, in reading Cicero. He was passionate about good governance and would have railed against our current, inept council with all his rhetorical might.

Late December marked 35 years since I met Susan. We met in a bar in Toronto, a serendipitous chance event on a cold evening, and we’ve been together ever since, closest of friends and lovers. I am daily surprised she stuck with me through everything, but it speaks to the iron in her soul. And a quirky compassion for a sometimes obsessed, grumpy old fool. More than half our lives spent together.

We both still recall quite clearly our very first dinner date … but that’s another post. We still go for mini-holidays to Toronto every year, visiting the AGO and ROM, Kensington Market and several bookstores. Always we are happy to return, laden as we are with bags of books. 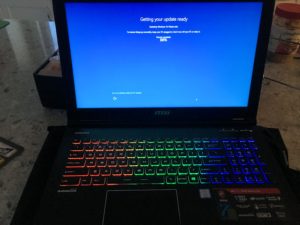 In November, I marked forty years since I bought my first personal computer – a TRS-80. I’ve had at least one computer, and used one daily, every day since, barring a few short holidays out of the country (even then I’ve often travelled with one or two in my luggage…). I’ve usually had more than one in my home during that time. I still feel the most affection for the Atari 800 of the early 1980s (when I penned my first book: Mapping the Atari).

In celebration of those 40 years of computing, I bought myself a new laptop (a first for me: a gaming rig – seen during setup the photo above). And I also took advantage of the annual Steam sale to purchase several more games to play. Would that I had the time to really appreciate some of them – Crusader Kings 2 and The Guild 2 are serious immersion monsters. Maybe I’ll get deeper into them if I actually retire and stop working. That’s at least a year, maybe two or more from now.

On a sadder note, 2017 was the last year of our much-loved rescue dog, Sophie, who developed lymphoma in her 14th year; it spread too rapidly to treat and she went for her last walk. That was a heartbreaker for both of us. I miss her at this time of year: she loved the snow and rolled in it at every opportunity, the deeper the better. Our remaining dog, Bella, however, is a real joy.

And in the fall, another stray cat came into our lives; a desperately scrawny cat that we befriended. We adopted him – or he us – and he is now named Ollie: a full-time resident, and one of the three cats of which we are guardians. And quite a bit larger than when we first met. Huge, in fact. Another thing to concern us in 2018.

As always, pets are constant companions and integral to our daily lives. I recently read A Small Furry Prayer and am reading Citizen Canine about our human-canine relationships (and human-feline, somewhat): our bonding, laws, sociology, history, and more. Fascinating and very moving – even inspirational – stuff. But then, I’ve long been a passionate, vocal animal rights advocate.

Towards the end of summer I achieved one of my religious goals: I became an ordained priest in the Church of Dudeism. Okay, I don’t have any real religious goals because I’m not a religious believer, but I’ve been contemplating becoming a minister for the Church of the Flying Spaghetti Monster for years, just for the conversation value. But The Church of the Latter Day Dude seemed even more appropriate after a re-watch of The Big Lebowski. And it was free. Dudeism has the disadvantage, however, that it is not – as far as I know – recognized by any governmental authority, while Pastafarianism is to some degree in a few places. Not that they can marry anyone. Yet.

I read (or started reading) a lot of books this year, as is my wont; this year more of them have been fiction than in previous years, including works by Margaret Atwood, Haruki Murakami, Marcel Proust, P.G. Wodehouse, HP Lovecraft, and Anthony Powell, Philip Roth, John Irving, Roberto Bolaño, Umberto Eco, Christopher Moore and others. I also read several non fiction, including my usual interests in history, politics and science.

My Goodreads “currently reading” shelf lists 167 books, and another 52 completed in 2017. That’s not quite accurate: some of these, like the Chicago Manual of Style 17th edition, are not being read the same way a novel is, or a book of history. And some others are books I browse through more slowly. Probably ten, maybe even fifteen percent of the books on that shelf aren’t being actively read. But it also lacks a few books on my shelf that I put aside earlier and neglected to list. The pile of books by my bedside for nighttime reading remains as tall as ever (Susan, also a voracious reader, agrees with me never to have a TV set in the bedroom).

I read two or three more books about Machiavelli this year and his era this year and as a result, added a few thousand more words to my book, Machiavelli for Mayors. The best was Benner’s Be Like the Fox. Maybe I should consider my book finished and I can finally wrap it up in early 2018. It tops 83,000 words now. I need to format it for an e-book to offer online.

I finally organized our collection of DVDs, sorting the 1,200-1,500 movies into alphabetical order, putting TV shows and documentaries into separate binders. Now all I need to do is create a database so I know what I have and where to find everything. Since we subscribed to Acorn and Netflix, I don’t buy many DVDs, so the collection isn’t growing as rapidly as in the past.

I was most prolific in October, penning roughly 27,000 words, and in January with more than 20,000. I was least active in June, posting just 5,000 (business conferences and meetings occupied much of my time). My posts often show high readability scores (10-plus), and ramble on at great length, which may deter some folks who think a tweet is an epic work, and find reading for more than 10 seconds at at time a significant trial (like The Block on our local council: unapologetically non-readers to a fault). Mea culpa, but since I love to write, and read, I can’t abide the illiterati on our council. Look at the damage they have done to this town by not reading the legislation, bylaws and their agendas!

My audience (number of views) is down a bit this year, back to 2015 levels after the high mark of 2016. This is probably in part because I wrote less about general issues like skepticism, science and literature, and more about our local council and the unethical, deceptive, conniving behaviour of many of its members. Maybe I need to write more about pseudoscience, about New Age woo hoo, and fake news. That seems to generate the most hits.

Still, the numbers, while somewhat lower, are yet comforting: someone out there continues to read my rambling posts. And perhaps my comments on local politics will reach enough people that they help us to elect an ethical, honest council in the upcoming municipal elections. The Noodliness knows we need one to cleanse our palates from the bad taste this one has left in our mouths. Collingwood deserves better.

So again, thank you all dear readers for giving me an audience, for reading my ramblings, for tolerating my acerbic nature and my sometimes caustic skepticism, as well as my passion for ethical local government (and my anguish over its absence this term). Have a safe, happy New Year and I’ll post again in 2018.