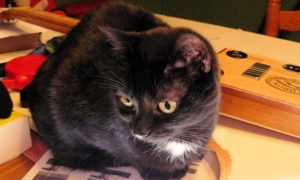 She was a small cat. At first we thought she might be not much older than six or eight months, but no, we were assured, she was fully grown. Just petite. Two kilos, maybe a hair more. Black with a little white patch on her chest. Big, expressive eyes.

This was a dozen years ago, back when the humane society was in its infancy, and didn’t yet have a permanent shelter. Cats and dogs that couldn’t find homes or foster care were kenneled with willing veterinarians around the region. Susan and I had agreed to adopt one more cat, and were told to check with a vet located between Elmvale and Wasaga Beach.

We drove out one evening, along a dark road, the last people to arrive there before closing. We were led to a spartan back room where they had several cat cages, in which were two cats awaiting adoption. One was a little older, withdrawn into that sort of kennel depression cats get when cooped up too long. The other was a small, black cat who looked like she was not long from kittenhood.

We were going to adopt the older cat at first, but the little black one reached out a paw through the bars and tapped my shoulder. Then did it again. And again. I opened the cage and she crawled into my arms. We were hooked. She came home with us that night.

We called her Abby, short for Abby Normal, not because she was crazy in any way, but because we had recently seen our favourite film, Young Frankenstein, and that name stuck with us. Abby was our home’s princess.

She loved the heat. Any place in the house where the sun warmed a patch of rug or furniture, she was there. In the summer she came outdoors on a leash and would sit on a cushion basking in the warm weather. Sometimes she’d sit beside Susan on a deck chair, small enough to snuggle into the narrow space. 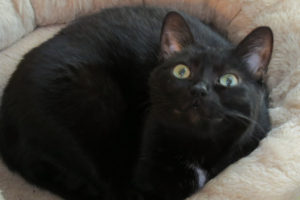 In cooler months, she sat on laps – mine when I was working on the computer or we were watching TV. Beside or on Susan when Susan was in the spare room, reading on the upstairs couch. If we lit the fire, she would move to a small cat bed nearby so she could be closer to the heat. We jokingly called her the perfect cat for Mexico.

At night Abby climbed onto the bed with us and slept on my lap while I sat up and read. When the lights went out and I hunkered down under the covers, she climbed atop my hip and stayed there most of the night. No matter how I might toss and turn, she managed to stay aboard my hip.

Abby was the mistress of the silent miaow. She seldom actually vocalized, but would look at you and make the facial motions without the sound. But if she was sitting by the window and saw a bird or squirrel outside, she made little cat noises to express her eagerness to give chase. Which she never did because like all of our cats, Abby lived indoors and only went outside with us, and on a leash.

When she was about six years old, Abby got ill. She suffered from allergies and sneezed and coughed a lot. The vet gave her shots with antihistamines, steroids and antibiotics but they only reduced the symptoms for a short while. A blood test showed she texted positive for feline leukemia. We wrestled with the implications – it could spread to the three other cats in our household. Her immune system was compromised and she would be vulnerable to all sorts of ailments – even minor illnesses could be significant, even fatal to her.

But she wasn’t in pain and didn’t appear to be suffering aside from what seemed like a perpetual cold. So we decided to carry on and just pay close attention to the health of the family.

And we’re glad we did. Abby rewarded us by being a delightful, affectionate, precious companion. She liked to be in our company. There’s something infinitely comforting about a small cat softly purring on your lap.

She turned 14 this summer and was as content and healthy as she had ever been. But a few weeks ago we noticed a swelling on the bridge of her nose. We didn’t worry about it then – it could be a mosquito bite, a scratch from another cat, or some minor infection. But it wasn’t. It grew rapidly to the size of a small grape.

The vet tried the sort of regime we had tried before – steroids and antibiotics. They provided only temporary relief, but nothing worked to reduce the size of the swelling. The tumour still grew and became ugly. And it was most likely cancer.

There wasn’t a cure. Surgery might extend her life, but with a weak immune system she might not get better, and might not even survive the surgery. We were faced with only one choice. But we didn’t want to lose her, to give up so quickly. It was too hard to say goodbye. So we took her home and tried to make her comfortable for as long as we could.

It wasn’t very long at all. Last week, the swelling closed one eye. She was clearly in discomfort, if not pain. Still agile, she spent more time sleeping than ever, and instead of in our company, she huddled alone in one of the upstairs rooms. Then she stopped eating. Didn’t come into the kitchen for her morning milk. Didn’t wait for her evening treats. We had the talk neither of us wanted to broach, but which we could not avoid.

Saturday we took her to the vet for her last visit. I can’t tell you how it broke our hearts to say goodbye to this little cat. Abby was much loved and will be much missed.