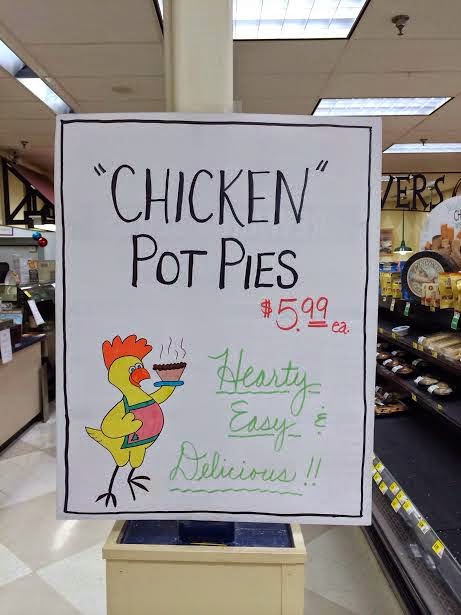 What goes through your mind when you see words in a paragraph or a sentence surrounded by quotation marks? Like that sign in the image on your left? That they are words excerpted from conversations or written content? Or that they are special; peculiar words, or perhaps used ironically, sarcastically or in jest?

Take these examples from the “Blog” of Unnecessary Quotation Marks:

It makes you wonder, doesn’t it? What is in the pie that isn’t “chicken” but we’ll pretend it is? Try reading them aloud and putting air quotes around those words. Ah, now you get it. “Slowly” means open the door really quickly, right?

Words in quotation marks tell the reader not to take them seriously or literally. They’re telling you that what’s between the quotation marks isn’t what’s in the pie. That you really need to pull the button not push it as was sarcastically suggested. They usually mean the opposite of the word within the quote marks.

So what about the sign that offers “Beer” for sale? Is that “beer” just coloured water? Pop? Or a vodka cooler? And you have to ask how used that “new” underwear really is before you buy it. Those quote marks just beg you to ask questions.

Mis-using quotation marks for emphasis is a fairly common form of grammatical abuse. The irony deepens when abusers don’t realize others treat the words in quotation marks as sarcastic or ironic. But the readers will see it thus and treat the content rather differently than intended. As in meaning something opposite to what is implied by the words themselves. Like that professional “massage” – nudge, nudge…

Buzzfeed offers more examples of quotation mark abuse. You may laugh at most – except the one selling guns as tools of “freedom” which is a bit scary, given the crazy gun culture in the USA. And that “sushi” – you have to ask yourself what it really is. Would you eat it?

Similarly, the Huffpost gives this example of abused quotation marks. “Quality” installations suggests the opposite and hard-boiled “eggs” – Nudge-nudge, wink-wink – are really potatoes….

These are not the confidential files you are looking for…. nyuck, nycuk, nyuck… 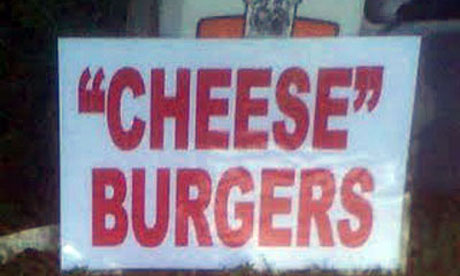 Wikipedia (and many manuals of usage) calls these scare quotes. Note the definition (emphasis added)

Scare quotes are a particular use of quotation marks. They are placed around a word or phrase to indicate that it is not used in the fashion that the writer would personally use it. In contrast to the nominal typographic purpose of quotation marks, the enclosed words are not necessarily quoted from another source. When read aloud, various techniques are used to convey the sense, such as prepending the addition of “so-called” or a similar word or phrase of disdain, using a sarcastic or mocking tone, or using air quotes, or any combination of the above.

In conversation, you’d likely put air quotes around these words. As Copyediting.com notes:

Quotation marks are rightly used to signal spoken or quoted words. They can also be used to signal the ironic use of terms, sayings, slang or significant words or phrases, according to Editing Canadian English. [ECE, 5.27] In writing, such quotation marks are sometimes called “scare quotes.” Air quotes (that obnoxious hand signal) are what you would do to signify this when speaking to a friend.

The MacMillan Dictionary has this to say about scare quotes:

The Oxford Manual of Style says scare quotes may serve ‘to hold up a word for inspection, as if by tongs, providing a cordon sanitaire between the word and the writer’s finer sensibilities’. It’s a technique that quickly wears thin, so style guides sometimes caution against its excessive use. And there’s a related problem: non-standard emphasis.
Sometimes people use quotation marks to stress a word or phrase, and this clashes with the general understanding of how the marks – and scare quotes – are properly used. In a comment to my recent article on the use of apostrophes, Kristen said she found this habit troublesome, offering the example ‘fresh’ fish, which inadvertently casts doubt on the freshness of the fish – the very opposite impression to what’s intended.
If you saw a window sign for ‘homemade’ stew or a label promising ‘delicious’ waffles, would the punctuation affect how you imagine the food? What about a cosmetic product that’s ‘good’ for your hair, or a claim that a service is ‘free’? Are you feeling trustful?

Sure, my canned soup is “homemade.” And my frozen pizza is “delicious.” See my hands making those air-quote gestures? Maybe I need a video…

When you see a sign saying “You’re in” Bear Country, do you think it’s meant as a pun on urine? Conversely if it said I was in “Bear” country I wouldn’t expect to see an ursine anywhere. Does a food item labelled “real” bacon make you doubt its authenticity (I bet “real” bacon is probably tofu…)? If it’s not bread in those day-old bags, what is it really?

More amusing examples of quotation mark failures are here and here. The Net is replete with them. As it is with advice on how to use quotation marks properly and not have your sign end up on a Facebook or Flickr page for people to belittle.

Ragan’s PR Daily has this advice about quotation marks:

In general, lay off the quotation marks when writing your own irony or humor. Quotation marks distance the writer from their words…
Resist the urge to use quotation marks for any reason besides the ones listed, or you’ll wind up referring to a former employee’s “retirement” years. This misuse appeared in a corporate article and made me question my understanding of retirement.
Or perhaps you’ll write an otherwise strong human interest story about an accident victim, who needed help with “everything” (the author’s quotation marks, not mine). There are a lot of things in everything …
Less is more, said Keeley. “My advice to people in terms of punctuation and diction is to think, ‘Do I actually need this, or am I throwing more things on the page?’”
If one judges by CEO letters, it would seem that particular practical thought doesn’t occur to some executives. For instance, there’s the airport chief with a penchant for enclosing the words belief and strategic plan with quotation marks.
My favorite is a consulting firm’s CEO who insists disabled employees are more loyal and less likely to “jump ship.” Again, his quotation marks, not mine.
Employees understand the meaning of “jump ship” and they won’t mistake the term for its actual meaning—unless this firm’s headquarters is at sea. Then there might be a problem.

I don’t mean this literally. You can use scare quotes when something is not the right word or phrase. Of course what I really mean by “not the right word” is that it simultaneously is and isn’t the right word. E.g., “the player then ‘wins’ with a loss of $100” (they technically won but really they lost). Or if the word is accurate only loosely by analogy, e.g., “the program bids ‘spitefully’” (there’s a tit-for-tat aspect to its bidding but, being a computer, it doesn’t actually have spite). Wrapping something in scare quotes is like adding a parenthetical “not really”. It should be done sparingly; typically only when the nonliteral usage might be confusing if not “called out”.
P.S. If the quotation marks in the last sentence were like fingernails on a blackboard to you then you didn’t need to read any of this. And, ironically, you’re likely the only one who didn’t find this all a painfully pedantic waste of time!

And the Great Writing Blog offers this advice:

Quotes are not for emphasis. Underline it, bold it, italicize it, use ***9 million asterisks***, but please don’t put quotes around it. Quotes don’t add emphasis. It’s just not one of their functions as punctuation. (Unless we’re talking about the title of a short work like a poem or article, but that’s not so much emphasis as correct form.) Drawing attention to a word in this way makes you look snarky when you’re trying to look serious, so you’re shooting yourself in the foot.

Quotes don’t add emphasis. Got that? Sums it all up nicely. So what do you think about the words in quotations in this sentence:

The harmonious interaction between “Administration” and the “Executive Board” (town council) sets the tone for the Corporation’s success.

Hmm. Do they mean something entirely opposite, like “fresh” and “chicken” and “massage” in the signs above? Do the quotation marks make you cast doubt on the meaning of the words? Make you think they’re nudge-nudge-wink-wink words? Just imagine them being said with air quotes…