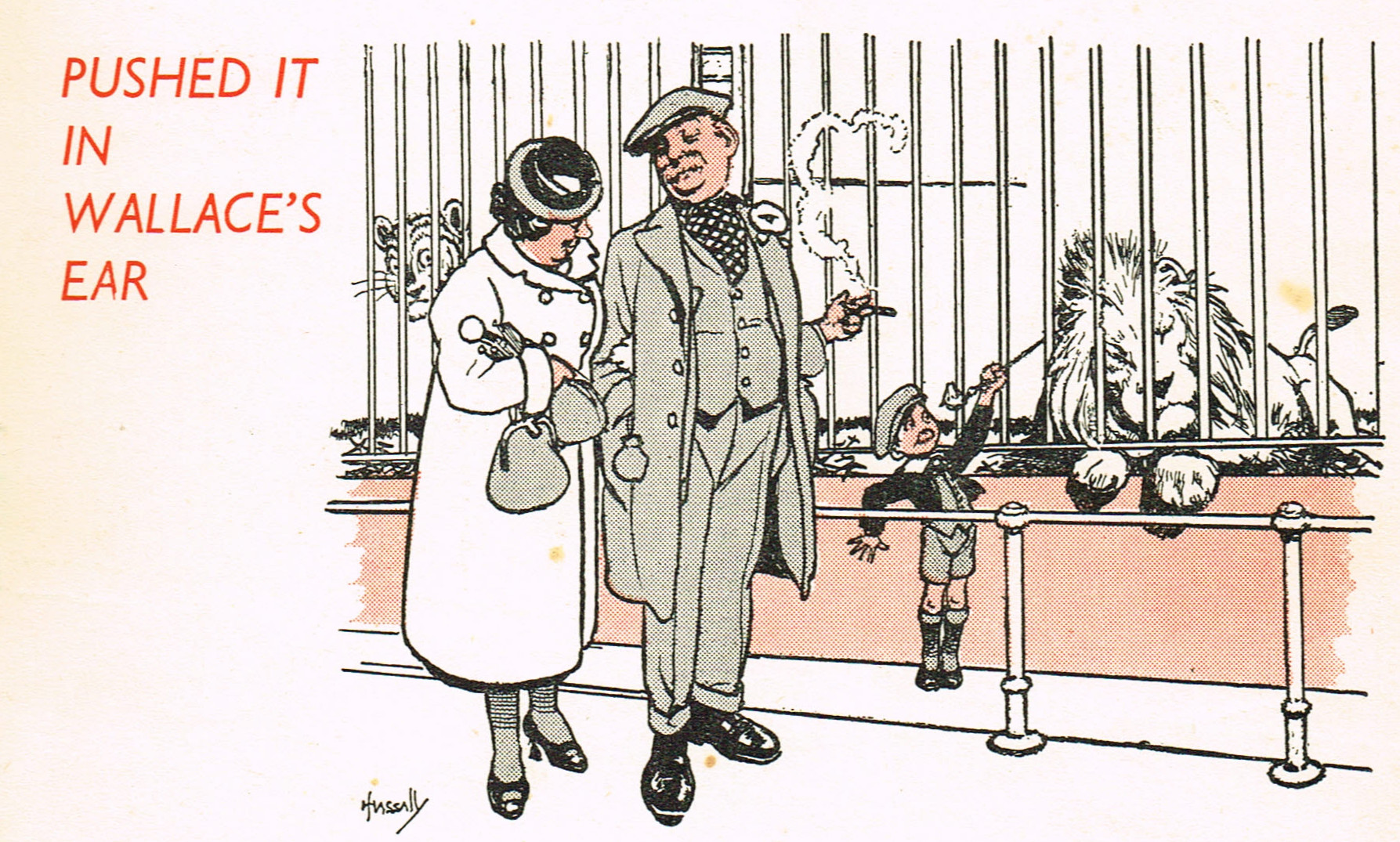 So begins the poem, The Lion and Albert, written by Marriott Edgar. I first read it in the book pictured on the right: a book that accompanied a collection of 78 rpm records in which Stanley Holloway read the poems (click to see a larger image).

I was perhaps nine or ten years old when I first found them in the family collection of 78s, along with the book of 12 poems and their drawings. We had an old, hand-cranked 78 record player in the basement and I used to go there and crank it up and listen to the scratchy old records. I loved them.

I loved the process of having to wind it, to set the heavy head on the platter and release the catch to get it spinning. I recall we also had an electric one – trec chic – in the basement where it had been exiled to, along with other odds and sods from my grandparents, like an old tube radio that was almost as tall as I was and had a half-dozen knobs on the front. In those days, I could still walk to the corner store and buy replacement tubes for it with my weekly allowance

Holloway at that time wasn’t known to me from any other performance. He wouldn’t appear in the film My Fair Lady until 1964. But I delighted in his voice and from him I learned a bit about British vaudeville, burlesque and even about the era of the Pearly Kings and Queens.

I used to parade around in my basement, swaggering, shouting out the words of the poems and monologues that I soon memorized. “With ‘er ‘ead tucked underneath ‘er arm…” about Anne Boleyn was one of my favourites. “Sam, Sam, pick oop tha musket Sam…” was another.

That was then. Somehow, over the years, I lost track of the book, forgot the sounds and the words. We moved from the house to a smaller apartment in 1962, and the old 78s and its player vanished, probably tossed away or given to neighbours. As I reached my teenhood, other fancies and interests took hold. I didn’t even think about them until many decades later.

When my parents died, I ended up with some of their belongings. Among them was a thin, battered, old book: the “libretto” for those Stanley Holloway records. A book I had read and reread many times in my childhood. Taped and retaped, it has been in someone’s closet or drawer probably every since I last looked at it. It’s the same one you see here, in the scan of the cover. It was published in the 1930s and was my father’s. He brought it to Canada, likely when he emigrated from England, in 1949. It’s one of the few things I have left of him.

I was browsing something or other online a little while ago and among the images popped up a picture of Stanley Holloway. That was the spark that got me to remember those old 78s and the basement where I sat and listened to him. I could hear his voice in my head again. I immediately looked for him on YouTube and found it. What memories!

Of course, I had to buy a CD of his monologues, too. I don’t have a 78 record player any more (although curiously I see some of the new digital players have a speed setting for 78s, something that my 1970s and 80s audio equipment had lost… although I wonder what they can play these days). There are several collections available; I bought the one shown here: the Essential Collection. Two CDs, 38 cuts with many of the pieces I remember, and a lot more I hadn’t heard previously.

I spent a couple of entertaining evenings listening to them last week. A bit disappointing that several of the monologues from the book are not in the collection – particularly the Battle of Hastings and the Magna Carta, which I recall fondly among my earliest of history lessons – but I’ll get them in another collection, I’m sure.

So let me share this with you, both in Holloway’s own inimitable voice and in the words of Marriott Edgar, with some of the images scanned from the book above. There were many other monologues/poems in the book (and on the 78s) you can also look for. Just a spoiler alert: Albert makes a comeback a bit later on in another poem… and Wallace was the name of a real lion (the first African lion to be bred in Britain, living from 1812 until 1838).

So, seeking for further amusement
They paid and went into the zoo
Where they’d lions and tigers and camels
And old ale and sandwiches too.

So straight ‘way the brave little feller
Not showing a morsel of fear
Took ‘is stick with the ‘orse’s ‘ead ‘andle
And pushed it in Wallace’s ear!

You could see that the lion didn’t like it
For giving a kind of a roll
He pulled Albert inside the cage with ‘im
And swallowed the little lad… whole!
Then Pa, who had seen the occurrence
And didn’t know what to do next
Said, “Mother! Yon lions ‘et Albert”
And Mother said “Eeh, I am vexed!”

So the manager had to be sent for
He came and he said, “What’s to do?”
Pa said, “Yon lion’s ‘eaten our Albert
And ‘im in his Sunday clothes, too.”
Then Mother said, “Right’s right, young feller
I think it’s a shame and a sin
For a lion to go and eat Albert
And after we’ve paid to come in!”

At that Mother got proper blazing
“And thank you, sir, kindly,” said she
“What! waste all our lives raising children
To feed ruddy lions? Not me!”