This was the entire first post that started a thread in a group I belonged to on Facebook. I think seeing it aged me a decade, and encouraged me to leave the group afterwards. Walking barefoot on broken glass would cause me less distress. All the poster needed to do to make me despair enough to seriously consider slitting my wrists would have been to write “yall” instead of “guys” (thus removing any actual words from the post)

I tire of the many posts and comments that flout even the simplest of grammatical or spelling conventions as if they were too restraining for free thinkers. Should I dare correct some flawed writing, say point out the difference between they’re and there, or that a superfluous apostrophe is unnecessary, or that capitals letter should begin each sentence, I get chastised as a “grammar nazi” and told to “chill,” or that the writer communicated his or her thoughts clearly enough for the rest.

I suppose proper English has become optional, even antiquated these days… all my years as a writer and editor have apparently been wasted on a craft that has died under the weight of technological change, convenience, and easily ignored rules. Like cursive writing, driving a stickshift, removing my hat when I am at the table, or saying please and thank you, these are the habits of a bygone era.

I suppose, too, it’s like being a modern blacksmith: a quaint, fustian sort of trade that tourists smile at when on a bus holiday to a faux-pioneer village. “And on your right, folks, over in the corner, you can see a person at a desk still writing in full sentences and complete words like they used to write before Facebook. And on your left, we have a blacksmith and over there some Morris dancers…” 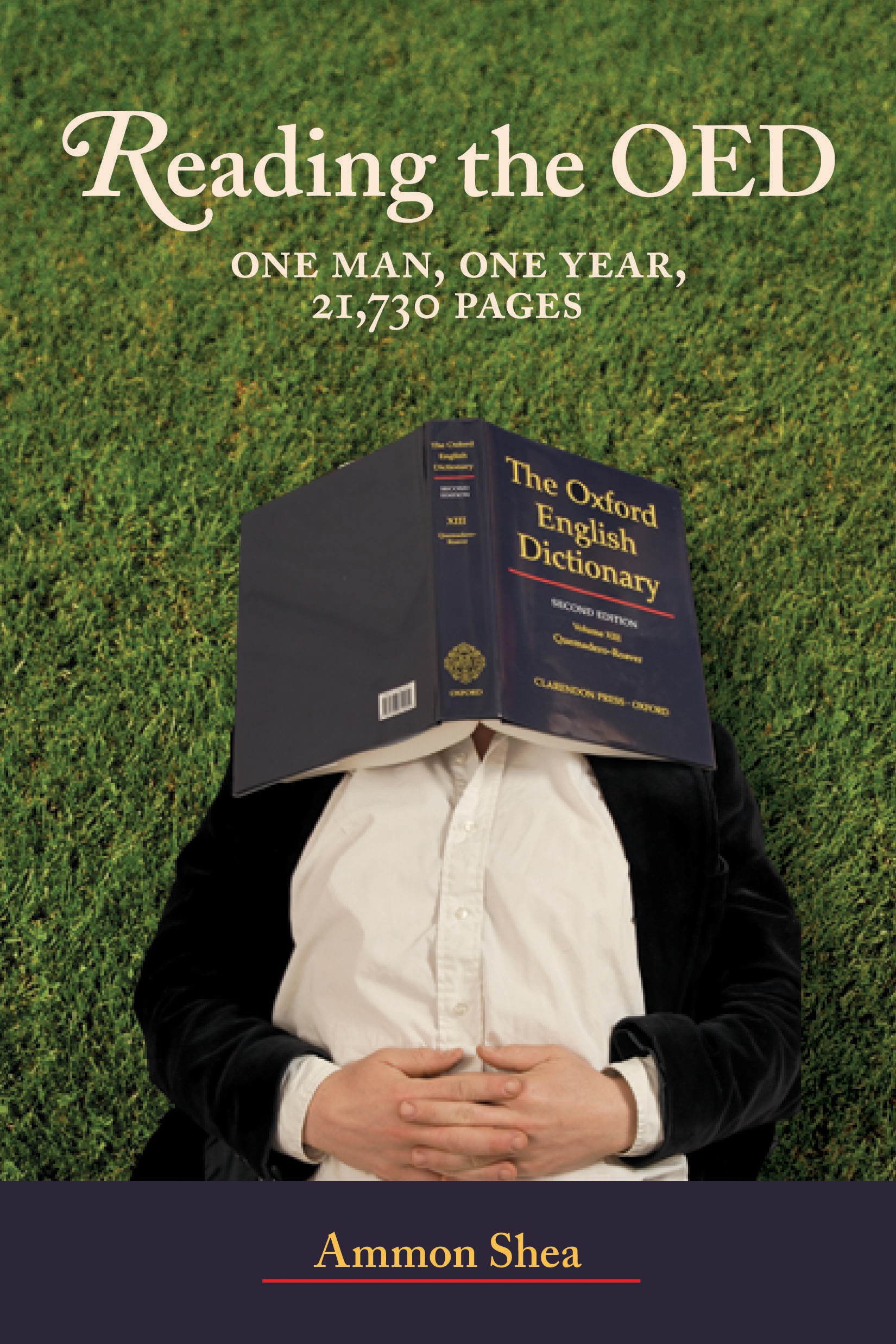 So you’re wondering what this has to do with Ammon Shea. Well, he’s the author of a delightful book I’m reading titled Reading the OED: One Man, One Year, 21,730 Pages (Perigee Books/Penguin, 2009). As readers here know, I still delight in reading books about words and language, and Shea helps restore my faith in humanity and language. Perhaps all is not lost after all when people read dictionaries. Well, at least one person does. And he wrote about the experience.

As the title says, Shea read the entire, printed version of the Oxford English Dictionary in a year. (Shea himself said in an interview that most days he read it nine to ten hours a day). More than 21,000 pages. That makes him heroic in my eyes.

I not only admire his effort, I am green with envy that he actually owns the full printed 21 volumes, a set I’ve wanted to own for several decades but have never been quite able to afford or justify (the current price is more than $1,000; one day I may win a lottery and buy it, but I expect Susan would still look askance at the expense).

I have one-volume Compact, Concise, and Canadian OEDs, and the 1971, two-volume Compact Oxford English Dictionary that reproduced the entire 13-volume complete dictionary from 1933, printed nine-up in such tiny type that a magnifying glass is included with the set. Plus I have other dictionaries: Random House, Merriam-Webster’s, Chambers, Collin, several books with selections from Samuel Johnson’s dictionary, plus numerous specialty dictionaries for various sciences, trades, and interests, plus etymological dictionaries and thesauri… but the OED is the one dictionary to rule them all.*

Yet I’ve never attempted to read any of them cover to cover, although I have often picked one or the other up to peruse and read selections from within and often find myself just browsing them randomly for hours, simply enjoying the words (I particularly enjoy reading Johnson’s dictionary for his often witty explanations, but the Chambers dictionary is a modern second in that department).

Reading an entire dictionary strikes me as a Sisyphean effort, because you’d be forever having to read the additions, updates, corrections, and new word blogs just to stay current. But the challenge… the OED is the Everest of reading challenges.

The fact that Shea read the whole dictionary cover-to-cover fills me with wonder and awe (and not a little jealousy). But even more so is the fact that he cares so passionately about words that he sprinkles some of his favourites in every chapter of his book, to tease us with some of the hidden gems that are buried within the complete OED. This is how I learned I was an artolater: a worshipper of bread (well, okay, that stretches the definition a tad, but it could easily apply to any home bread baker). Words, he reminds us, not merely matter, but delight.

The Oxford dictionary was an ambitious project that began in 1857 and has continued ever since. What can be more challenging than trying to document and explain every word in a constantly changing and evolving language? A language that adds and drops words like leaves on trees, and absorbs foreign words like a sponge. A language that easily flexes itself to turn verbs into nouns and vice versa, to cobble together new words — neologisms — as easily as we eat salted peanuts, then ignores them after a short but torrid romance with them.

In a dictionary, a single use of a word gets hunted down through the ages, its author or first user identified, records searched for its recurrence and for changes to its meaning, sources quoted, the non-native roots exposed, the word defined and shown in context, the word is defined and its usage explained, and its cousins, relatives, and alternate forms are listed. Every word is a story unto itself. How magical is that!

The last complete edition of the OED in print was published in 1989. Since then there have been three volumes of the “Oxford English Dictionary Additions Series” printed, covering changes additions, corrections, and updates: two were published in 1994 (352 and 384 pages, respectively) and one in 1997 (424 pages). These are all still available, but the complete set is $1,215 US from Oxford, plus shipping, and the additions are $70-$85 USD each.

The complete dictionary was released on CD in 1992, but was discontinued 25 years later. As the OED site says:

The OED CD-ROM was originally released in 1992 and, although we have updated the content and the software several times since then, it will not function on the new operating systems currently being developed. As such, we made the decision to discontinue the CD-ROM in 2017. However, subscriptions to the OED Online are available as an alternative.

Damn. I missed my chances to get the CD when I could, although I probably wouldn’t work on my Windows 10 computers today (and the gods only know what older software will clam up under the new-yet-unasked-for Win 11…). And, being retired these days, I have the time and place to read but not to subscribe and clump through the online version. For the most part, I dislike online databases of any sort and prefer books over them.**

Shea wrote at the start of Chapter S:

One of the reasons the OED is so wonderfully and excruciatingly long is the thoroughness with which it treats almost every word.

The book isn’t simply a diary of his reading: it’s a sometimes peripatetic meditation on words, language, dictionaries, lexicographers, obsessions, bookstores, and learning. Each chapter — arranged alphabetically, of course — ends with a handful of the words he found in that letter that amuse or bemuse him. Shea’s book is quite a joy to read, despite my envy.

* Note that I have not purchased the Shorter Oxford edition. A one-volume edition was printed in 1993 with 3,836 pages, but the one I want is the two-volume edition that came out in 2007 with 3,804 pages. There are other one-volume editions published since my last dictionary purchase, including a 2010 edition with 2,112 pages. Sigh. I could own them all… but the complete remains the dream.

** Some of the most popular online dictionary sites are rubbish: clickbait sites that often steal their definitions from legitimate lexicographers. Or not, especially when an archaic or rare word is questioned. For example, on artolater, Definitions.net came back with Did you actually mean airedale terrier? And Dictionary.com told me “No results found for artolater.” Nor did wordplays.com have a definition. And to my surprise, neither did Merriam-Webster.com or Chambers.co.uk and they are legitimate. But Lexico.com, an OED-powered site, came back with both a definition and etymology.
However, one cannot read an online dictionary as one reads a printed one. There isn’t a “next word” button so you can go from A to Z. You have to search for specific words, which defeats the whole purpose of reading a dictionary.

Don’t get me started on the advertising-biased database search algorithms of online sellers like Amazon. That’s something for a long, invective-filled post in the future. But today I searched Amazon for “chambers dictionary in books” and it showed up as number 37 after 36 entries in which the word “chambers” was not even present. Those included other companies’ dictionaries, French, Latin, Spanish and medical dictionaries, a book of French short stories, an art book on Kindle, a book about orchestration techniques, a book of English folk songs, poems by T.S. Eliot, selections from Don Marquis’s Archy columns, a book of sermons, the art of ancient Egypt, a book by Lewis Carroll, a romance/soft porn novel, a Dostoyevsky novel… this is just one reason I still prefer to browse and buy in actual bookstores rather than submit to Amazon’s customer-hostile search engine.