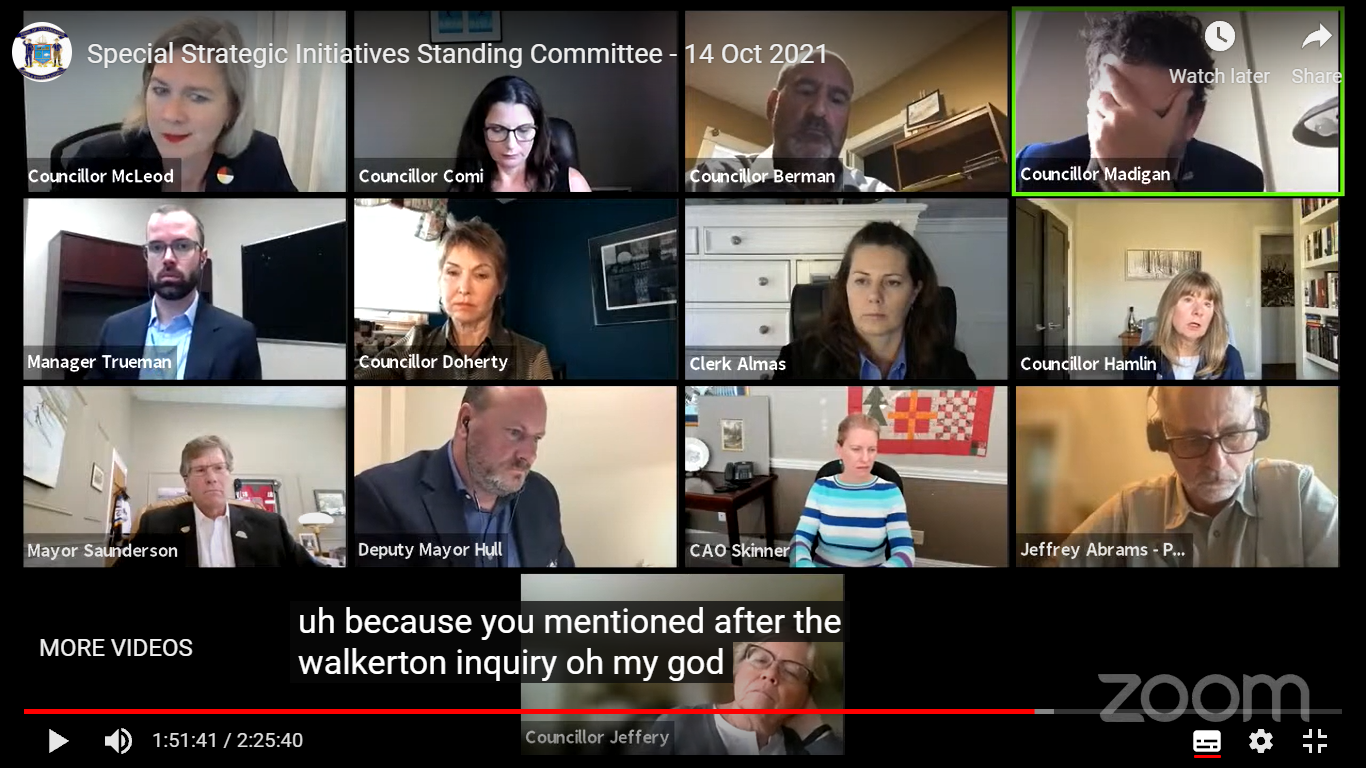 There’s a video clip being shared on social media from the “special” meeting of the Strategic Initiatives Standing Committee Agenda, on Thursday, October 14, 2021 (full video here). It shows a dishevelled Councillor Bob “Lapdog” Madigan in the upper right corner of the screen. It’s worth watching to see how poorly some of our councillors treat their role and their office.

The meeting was held to continue the discussions on the judicial report’s recommendations that councillors should disclose their personal financial relations and holdings when elected. Seems many on council (and some staff) think they know better than the judge and “experts” who made the inquiry’s recommendations and can choose which they want to obey.

I wrote about this Oct. 8 in a piece titled, What is Council trying to Hide? I’ll come back to the discussion later, but fast forward your video viewer for a moment to see the highlight.

At 1:51:33 in the video, Councillor Hamlin, in the frame directly below Madigan, wants to ask a question about the issue, but when she starts speaking, at 1:51:42, Madigan does a very obvious facepalm and loudly exclaims “Oh, my God…” He rubs his face several times, then stares blearily at the camera, looking more like someone barely revived after a long, hard night of excess than an elected representative.*

At 1:51:47 Mayor Saunderson (tieless; the casual look befits more an office worker just coming off shift than a mayor in an official meeting) has to remind Madigan that he’s not on mute. You’d think that after two years of Zoom meetings, councillors might know about muting themselves, but apparently not. Madigan doesn’t look like he takes this mild rebuff seriously. And after all, why should he? It’s not like he was criticized for being a disrespectful jerk in public.

Madigan continues to rub his face, and look offscreen, while Hamlin calls a “point of personal privilege.” Here’s where the cracks in the Block start to show. She says:

I have observed so many instances of this councillor rolling his eyes, and creating all kinds of “Gee, I wish you would shut up!” kind of, you know, things, and I am just at the limit of what I can take! So I would ask you, Mr. Mayor, if you would kindly ask this councillor to keep his mouth shut when I’m speaking and show some decorum. 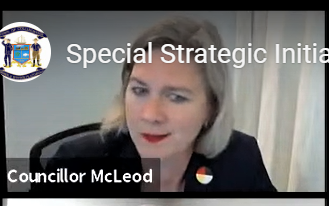 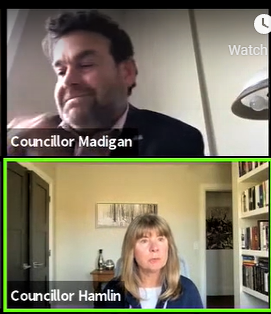 During this, Councillor “Besmirched!” McLeod smiles, and looks as if she’s enjoying the fracus. Madigan himself smirks (1:52:15), apparently showing how little he cares for Hamlin’s irate request or for her anger.

Hamlin’s comments make it clear this disrespect is not new and has been going on for some time. So why hasn’t the mayor shown leadership and stepped in? And why did Hamlin HAVE to ask the mayor to act like a leader and step in? Why didn’t he do what he was elected to do without being asked?

Oh, right: he’d have to care about Collingwood or his role. Instead of disciplining his most loyal supporter (hence the “Lapdog” nickname), Saunderson, at 1:52:20 meekly cautions Madigan to make sure he’s muted and “keep your comments to yourself.” Madigan’s smirk says it all.

(You have to wonder: is Madigan showing his disdain for a particular councillor, or for all female councillors?)

So much for strong leadership. Or any leadership. But then, why should Saunderson care? Saunderson basically quit his job back in January, although he still refuses to do the ethically right thing and resign. However, he continues to take the town’s paycheque while he waits for his better-paying job at Queen’s Park to arrive.

(If you continue to watch from this point, try to ignore the dog’s loud barking from 2:19:10 to 2:19:40 while Hamlin continues to speak… maybe she should have shut the door? Does no one on council READ any advice about Zoom meeting protocols and best practices?)

Madigan earlier (1:46:36) said, “we as town leaders and that’s what we are: we’re town leaders.” An amusing comment from someone who has not led anything on council I can recall, or offered any direction, initiative, ideas, or even significant comment, but has been an admirable follower of his Great Leader since he was first elected. I guess he’s leading from behind.

(Let me add that at 1:47:35 Councillor Comi speaks against the motion to divulge personal financial information, and while I disagree with her views, she’s the only one in this debate I found made a cogent argument about the thorny issues of bureaucracy, governance (“what role governance plays in people’s lives”), and political philosophy. Her comments get no reaction from the rest who may be bemused by those concepts, but I digress…)

At 1:49:30 Saunderson attempts to make it seem like he and his cabal are dedicated to following the recommendations of the $10 million (and still spending!) waste of taxpayers’ money, aka the Saunderson Vindictive Judicial Inquiry (the SVJI) instead of cherry-picking the ones that don’t inconvenience them:

I would say that in the course of this discussion and since the judicial inquiry has been, uh, the judgment has been rendered with the 309 recommendations, uh, this town has, uh, worked extremely hard with staff and council to implement those and  look at ways we can make our community better in our council more transparent and accountable. I see this, uh, in many respects as similar to the Walkerton inquiry…

At 1:51:07 he says he wants to “turn to my residents and tell them that I pursued every aspect of the judicial inquiry…” Stop laughing. He really said that. HIS residents. Transparent and accountable! WALKERTON! He thinks his little, nasty personal vendetta about process and thwarting his ambitions has any relation to the Walkerton inquiry about a lethal situation where people died and some still suffer health problems, and resulted in sweeping legislation to affect changes.

I couldn’t stop laughing either. What a narcissist. Very disrespectful to the people of Walkerton.

What utter hypocrisy. He completely ignores that he has (as well as the deputy mayor, and Councillor Hamlin have) steadfastly and frequently refused to declare conflicts or disclose personal interests in issues relating to employment, income, former employers, coworkers and friends, in direct violation of the inquiry’s recommendations about “apparent” conflicts. L’etat c’est moi! 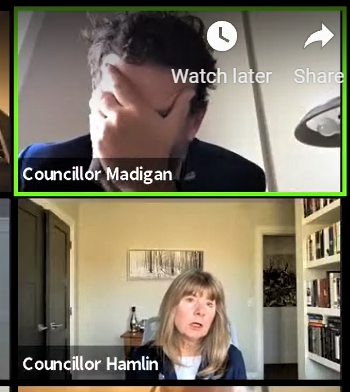 And as for making “our community better” — just look at our unsolved, but increasing traffic problems; our crumbling, potholed roads and broken sidewalks, our scruffy parks and public spaces; First Street’s rusting lamposts; our town’s disrespect for its heritage and history. Look, too, at how council utterly failed (and continues to fail) in its response to the COVID-19 pandemic and lockdowns, doing nothing to help the local business community or its workers.

But we’re getting an over-budget splash pad built on a former dumpsite instead of where the public wanted it, plus a magical “healing forest” in a park already full of trees, road signs that spelled our province “ontatio” (since “corrected” with a sharpie to read “onrario.” Sigh. Quality R Us), and a maybe-sort-of-possibly-perhaps-wait-and-see-not-right-now vaccination almost-policy. And, of course, they keep giving themselves a raise every year for doing such a wonderful job.

Remind me again what this council has actually done to make the community better this term… oh, right: nothing. But they HAVE spent more than $10 million on the SVJI, including the payments to Saunderson’s and Hamlin’s sole-sourced former employers this and last term. And we got a digital report about decade-old events from it with recommendations that council feels entitled to cherry-pick from. Wow. What progress.

This meeting shows all too clearly how our elected council has devolved into: puerile squabbling and bickering in public, smirking and facepalms while others speak, a vacuity of ideas and direction, and no leadership at all.

* The meeting was covered by CollingwoodToday, although the embarrassingly childish disrespect and bad behaviour were glossed over. It has not appeared in the online Collingwood Connection, but it seems unlikely coverage of the bad behaviour will appear in print since it would paint some councillors in a bad, albeit realistic, light.