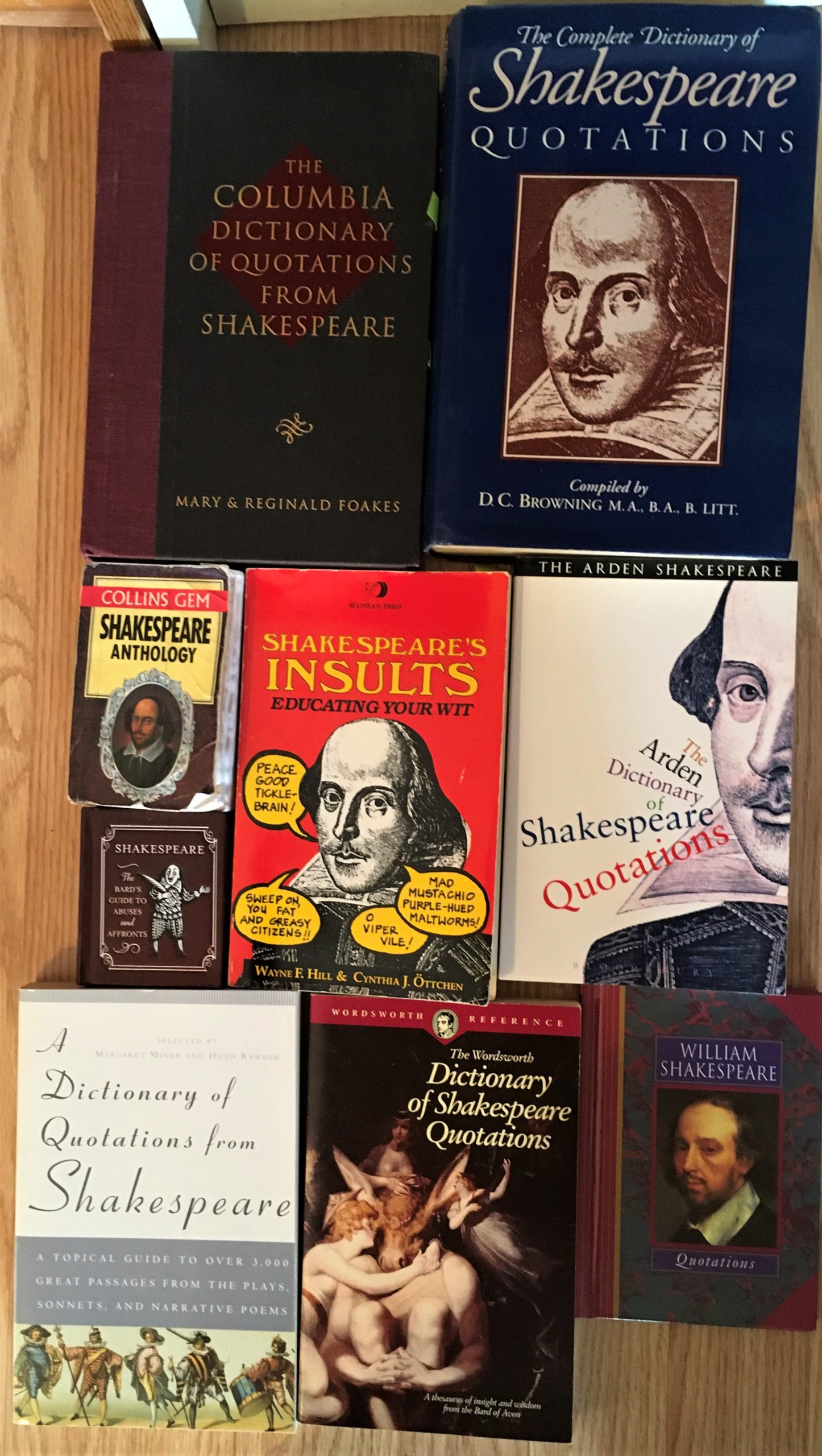 A good book of selected quotations from Shakespeare is a nice complement to the collected works. Properly arranged, it lets you find relevant aphorisms, and speeches on a wide variety of topics; bon mots you can drop into conversations, emails, and blog posts. As is my wont, I have collected several of these books, and herein are my opinions of them. Note that there may be later editions than those noted here.

First, I classify them as four different types of quotation books:

The best sources for reference are the dictionary-style collections because they follow the precedent of other standard quotation sources such as Oxford, Bartleby, Columbus, and Colombo. The alphabetical arrangement of topics makes it easy to look for relevant quotations and provides a reference to where it can be found in the source (preferably act, scene, and line for plays; lines for poems). Line numbers will sometimes differ depending on the source used (i.e. Riverside or Oxford editions).

And I caution against depending on the general online quote collections, most of which allow any user to post a “quotation” without citing a proper source, or having anyone confirm it later. Far too many of the online quotation sites are responsible for thousands of misattributed quotations shared on social media.  And the alleged quotation may be miswritten as well. These sites are not authoritative: they are generally just clickbait for their advertisers. Avoid them. There are, however, dedicated Shakespeare sites that are credible sources for quotations. But I still recommend owning at least one of the dictionary-style collections referred to below. Nothing beats a book.

I have four books in the dictionary format and these are my best sources. There is, as might be expected, some overlap in selections in any topic, but each offers a different selection, sometimes wildly different. Only the Arden and Columbia collections include The Two Noble Kinsmen. None have Edward III or Sir Thomas More.

All four have proven useful to me when looking for a relevant quotation or aphorism, but I tend to rely mostly on the Arden edition, followed by the Columbia, the Miner/Rawson, and finally the Wordsworth. All except the Wordsworth edition offer suggested terms for cross-reference in their topics.

As an example of the differences in selections, I looked up the following topics in all of the above. First, fear:

I have three specialty books, all three of which are worth having in your library and will expand your knowledge and appreciation of Shakespeare:

I have three general collections, which usually offer highlighted selections without providing context or explanations. The Collins Gem anthology has been a welcome pocket companion to me for the past 25 years.

And three novelty collections. None of these are necessary for any library, but may make nice gift items:

I welcome and recommendations and suggestions for additional titles, as well as comments on these books.