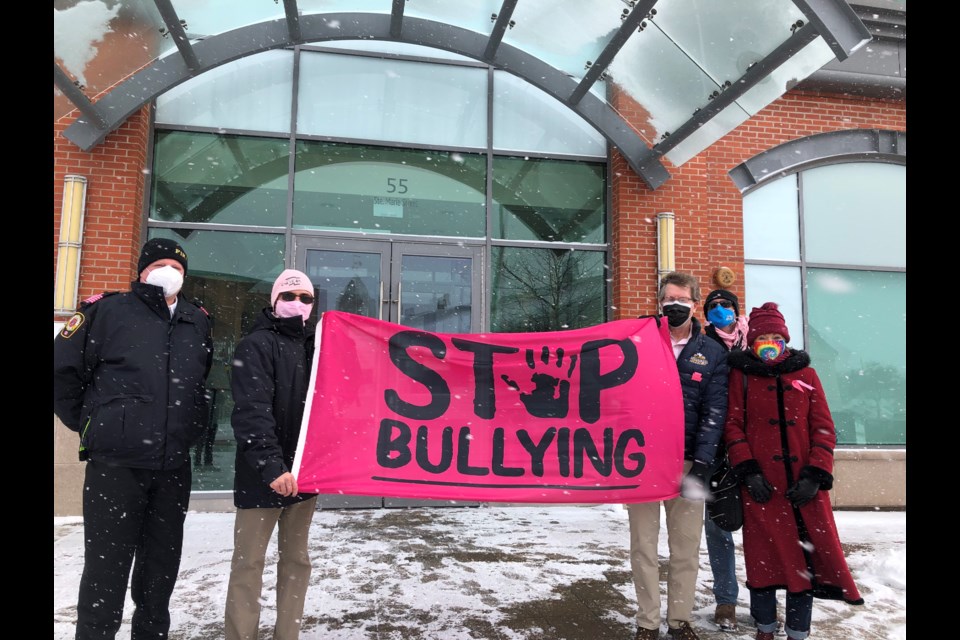 This week, the Town of Collingwood again raised the pink flag to show its support against bullying. It’s an initiative that local resident Trevor Henson has been promoting for the past 16 years. How ironic that Mayor Saunderson was there to hoist it. And look, there were councillors Doherty and Berman beside him, two of the Gang of Six Bullies.

Given council’s role in bullying former councillor Tina Comi into resigning, and Saunderson’s failure to responsibly do his role as mayor and show even a pretense of leadership, none of these people should have been present at the flag-raising that is supposed to protest bullying. For any of them to be there was utter hypocrisy. They are the bullies.*

And even more hypocrisy: Saunderson has proclaimed March 8 as International Women’s Day.

Who can forget when Councillor Comi made a presentation about International Women’s Day in February, 2020. Before the meeting, Mayor Saunderson sent an email to all of council asking if the historical fact that Mayor Sandra Cooper was our town’s female mayor should be allowed to remain in her presentation. That’s how petty he is.

And when Comi started to speak, Berman walked out of the public council meeting to protest Cooper being named as the town’s first female mayor.**

And who can forget Councillor Madigan’s boorish behaviour towards both Coun. Comi and Coun. Hamlin, in public, at council meetings? His misogyny was overlooked by Saunderson every time. But Saunderson demanded Hamlin apologize when she called out Madigan for making faces while she spoke. Our mayor not only refused to discipline his pet lapdog, Saunderson ignored Madigan’s appalling behaviour and admonished Hamlin instead.

Saunderson wants votes for his campaign to get out of his mayoral responsibilities and get a better-paying job at Queen’s Park, so he hoists the flag and makes these proclamations, no doubt hoping voters forget who he really is. But we will remember, won’t we?

* Not all of the council bullies were present at the flag-raising. The seven who filed identical complaints against Comi when her 11-year-old son inadvertently interrupted a council Zoom training session are: Mayor Saunderson and councillors Berman, McLeod, Doherty, Jeffery, and Madigan. Despicable bullies, all of them.

** Of course, our flaccid local media didn’t mention this, but then, when do they ever embarrass their friends?