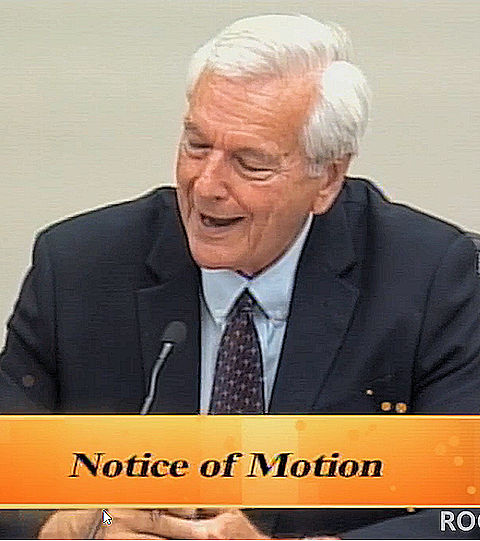 When I saw Cam Ecclestone’s self-aggrandizing flyer, I was strongly reminded of the opening of Chapter 24 of the Tao Te Ching, which in my latest translation reads,

Blowhards have no standing,
The self-promoting are not distinguished,
Show-offs do not shine,
Braggarts have nothing to show,
The self-important are here and gone.
(The Dao De Jing: A Philosophical Translation, trans. Roger Ames & David Hall, Ballantine Books, Jan. 2003)*

As the least active member of council, the vain Ecclestone’s main contribution to the process this term has been to make the motion to adjourn at the end of a meeting. True, we’re thankful that he calls for an end to a painful, and often unethical process, but it’s hardly noteworthy.

In fact, he is so silent and unmoving that some council watchers often wonder if he is even awake during the meetings. And when he does speak – a rare occurrence – it’s usually to stutter and stumble through his unflagging if sometimes incoherent support for something from his leader, Brian Saunderson.

It’s amusing to read this brochure for several reasons, not least is his taking credit for things he had nothing to do with – and some that this council didn’t start, simply watched continue. If you didn’t know better, from reading his flyer you’d think he was mayor, or at least someone who actually did something.

Most of the credit for positive things on his list goes to the previous council. In his egotistical way, Ecclestone fails to give any  credit to town staff for actually doing the work while he sat at the table, nose in the air, consuming precious oxygen.

In retrospect, the entire list of things Ecclestone has raised or initiated this term, has championed or advocated for is coincidentally equal to the number of times he has voted independent of Brian Saunderson this term: none. His contribution to the greater good has been equally lacking in substance.

As a writer and editor (albeit retired), I also wonder who did his brochure’s editing because it’s so full of grade-school errors, bad capitalization and punctuation, and clumsy phrasing that I suspect a grandchild had a hand in it. If Ecclestone himself was responsible for the atrocious writing, then he desperately needs some remedial English lessons.**

Ecclestone’s main claim to fame before he got elected was allegedly being the head of a trailer park committee in Lutterworth – a remote township of woods and lakes populated mostly by wildlife and Ecclestone’s ego. I can imagine how stirring were the debates on how often the porta-potties got flushed.

His main claim this term has been to introduce himself to people he had met several times before (including, I’m told, other members of council). That and getting completely lost trying to follow the agenda – so much so that the clerk or the mayor has had to guide him through the process in innumerable meetings, step-by-step, like he was a toddler learning to walk each time. One suspects he moved out of the wilderness of Lutterworth because of his propensity for getting lost so easily.

The first word he uses in his flyer is “Independence.” Not his own, I suspect, since he has shown no trace of that attribute this term. Given that, as a loyal member of The Block, he has voted every single time exactly how Brian Saunderson has told him to, we have to assume he’s being facetious. A better choice of word might be robotic, or perhaps oblivious.

Another word he uses is “trust” but he doesn’t explain why we should trust someone who privatized our electrical utility and voted to sell other public assets without public consultation. Or one who attended more closed-door meetings than an ethical councillor would. Or one who refuses to ask questions that might make his leader uncomfortable. Or one who won’t explain why he and his fellow Blockheads are doing things that affect public interests and hurt the community.  Or trust someone who ignored the public outcry and voted with Brian to put roadblocks up that delayed our hospital’s redevelopment for anywhere from three to ten years.

Words like trust go hand in hand with accountability and openness – and in Ecclestone’s case they go right into the wastebin. Not words anyone would use with this council – the most secretive and deceptive ever – except ironically.

A lot of what Ecclestone writes is disingenuous at best, and sometimes shows gobsmacked ignorance about how town hall, municipal departments and bureaucracy work.

He makes promises to do things he should have done this term, but chose the opposite direction. Like: “Continue to work in collaboration with the Hospital Board (sic) for a new state of the Art (sic) Hospital (sic) in Collingwood.” That’s got to have hospital board heads shaking in disbelief, considering Ecclestone did the very opposite this term – and voted with The Block to impede the hospital’s redevelopment, without any effort to be collaborative in any way.

Or what about, “Target property tax increases to come in at the Zero (sic) to 1% range.” Given that he voted four times for higher property tax increases PLUS an additional tax levy for asset reserves, PLUS voted himself a pay raise every time – you wonder why he never did it this term. Maybe he’s counting on Brian not being there to tell him how to vote next term.

Then there’s his claim about using the “special capital tax levy” (aka automatic tax increase) for “sewers and wastewater management.” Well anyone who can read a budget knows water and wastewater upgrades are self-funding via the rates charged on users, not via a special levy. But that sort of knowledge requires actually reading the documents that come in agenda packages.

And he claims council “(k)ept property tax increases to less than 1% for each of the last 3 (sic) years”, which is, as you well know, simply blatant bullshit. But well in keeping with The Block’s distant relationship with truth.

He promises to “(c)ontinue to pay down debt…” as if the town had any choice. After all, paying your debts is a legal requirement. As if every other council before his didn’t pay down its debts, too.

Or his claim that the airport has to be sold because it has been a “financial drag on the town for years.” Ecclestone and his comrades refused to support the creation of 1,000-plus jobs at the airport and a commercial development that could have seen the airport become very profitable for the town. If it’s a drain, it’s because he has helped keep it that way. And it’s only about 0.5-0.6% of the operating budget.

Buses are also a “drain.” So are sidewalks, roads, parks, police, water treatment, special events, the waterfront… Ecclestone is clearly unaware that’s what we pay taxes for. Or which local businesses, provincial ministries and armed services depend on our maintaining the airport for their use. But he’d never engage them to find out why it matters because, well, The Block. They don’t engage.

He lists as an accomplishment the “creation of 147 affordable housing units” – which had nothing to do with this council because it was a county project years in the making, the efforts of many county politicians and staff, and Ecclestone had absolutely no say in the matter. He’s never attended even one county meeting.

He credits council with “Began (sic) streaming of all meetings for more transparency, accountability and accessibility” – except that his clique moved standing committee meetings to the top of the library to avoid having them broadcast online or TV, and to make them more secretive and inaccessible to the public. It’s like saying “We closed and locked the door on the public in order to be more open.”

He claims “We stopped the Wind (sic) Turbines (sic) from being built around our Airport (sic)” when council did nothing of the sort. It was a legal challenge initiated by the previous council, supported by neighbouring municipalities (which have all since quit the airport board in protest of this council’s behaviour regarding the airport)  and it was done by lawyers, not councillors. Yet on another line he wants to sell the airport!

He lauds the creation of the “Community based Strategic Plan (sic)” which was neither community-based nor a strategic plan, and was merely a risible wish-list created by council friends that lacked measurable goals, a budget or a proper timeline.

Like I said, it’s amusing stuff, if you aren’t embarrassed by his self-serving but abject efforts to pretend he has actually done something worth noting this term. It’s entirely the sort of diaphanous piffle we have come to expect from Block members and claiming credit for the work of others only serves to underscore how bad they have been. But I suppose we should thank Cam for giving us something to chuckle over.

This guy with his hollow boasts, his false claims and his empty promises wants to be re-elected? He already has a difficult time keeping up with the process and has contributed exactly nothing in four years. Will he snooze through the whole next term on taxpayer money?

The second half of Chapter 24 of the Tao Te Ching continues with more wisdom about avoiding people like Ecclestone and his fellow Blockheads:

I prefer the translations that describe people like him and his comrades as “leftover food and excess fat” or “surplus provisions and useless actions.” However, you get the drift. The Block are like flotsam and jetsam; unwanted detritus deposited on the beach of our municipal politics.

~~~~~
* This is also translated in many versions online as:

People who stand on tiptoe are not steady.
People who take the longest strides cannot keep up the pace.
People who show off do not stand out.
People who promote themselves are not respected.
People who boast achieve nothing
People who brag do not last.
According to the Dao,
They are like leftover food and excess fat.
All creatures detest them.
Therefore, followers of the Dao avoid them.

** Generally councillors who announce a motion with the grammatically atrocious “moved by myself…” are no better when writing than when they speak.