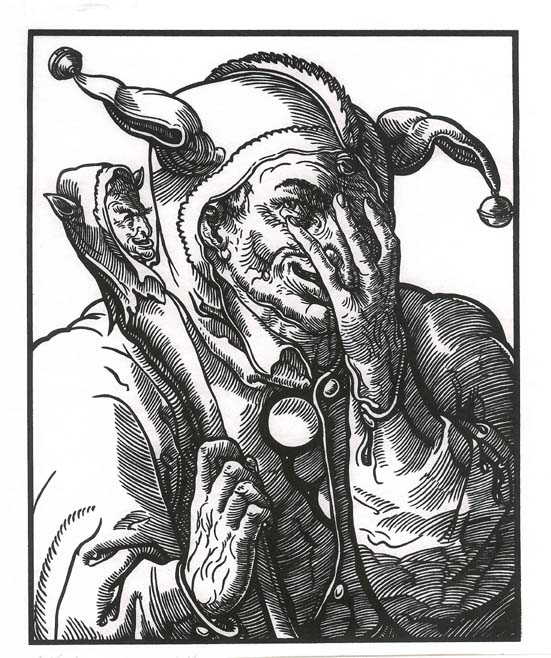 Foolosopher. What a wonderful word. Not much in use these days, but it ought to be. It is a portmanteau word, first used in English way back in 1549*, according to my copy of the Concise Oxford English Dictionary. It defines foolosopher as, “A foolish pretender to philosophy.” So foolosophy is therefore the “foolish pretence of philosophy.”

We suffer from a surfeit of foolosophers, these days, methinks. Thanks to the internet, foolosophers have sloughed the necessity of actually having to think about what they write. It’s inconvenient to actually read what they feel compelled to comment upon. Just think of any public issue or debate and there they are. In the past, foolosophers needed to grab a soap box and stand in a public space to express their rambling ideas and wild theories. Today all they need is a Facebook or Twitter account.

Foolery, sir, does walk about the orb like the sun, it shines everywhere.
William Shakespeare: Twelfth Night, Act 3, Scene 1

Fool is a word that doesn’t get as much traction as it deserves these days. In an invective-dense culture, fool seems almost cutely antiquated, a little prim and schoolmarmy. When 10-year-olds drop the F-bomb with practiced ease, calling someone a fool lacks verbal punch. The word has such a range of meanings: there’s a world of difference between “my foolish heart,” “where fools rush in,” “fooling around,” “April fool’s” and Mr. T’s exclamation, “Fool!”

According to the Online Etymology Dictionary, fool has a long genealogy:

…late 13c., “silly or stupid person,” from Old French fol “madman, insane person; idiot; rogue; jester,” also “blacksmith’s bellows,” also an adjective meaning “mad, insane” (12c., Modern French fou), from Latin follis “bellows, leather bag” (see follicle); in Vulgar Latin used with a sense of “windbag, empty-headed person.” Cf. also Sanskrit vatula- “insane,” lit. “windy, inflated with wind.”…
Meaning “jester, court clown” first attested late 14c., though it is not always possible to tell whether the reference is to a professional entertainer or an amusing lunatic on the payroll. As the name of a kind of custard dish, it is attested from 1590s (the food also was called trifle, which may be the source of the name).
There is no foole to the olde foole [Heywood, 1546]
Feast of Fools (early 14c.), from Medieval Latin festum stultorum) refers to the burlesque festival celebrated in some churches on New Year’s Day in medieval times. Fool’s gold “iron pyrite” is from 1829. Fool’s paradise “state of illusory happiness” is from mid-15c. Foolosopher, a most useful insult, turns up in a 1549 translation of Erasmus. Fool’s ballocks is described in OED as “an old name” for the green-winged orchid.
fool (v.) mid-14c., “to be foolish, act the fool,” from fool (n.). The meaning “to make a fool of” is recorded from 1590s. Also as a verb 16c.-17c. was foolify. Related: Fooled; fooling. Fool around is 1875 in the sense of “pass time idly,” 1970s in sense of “have sexual adventures.”
fool (adj.)
“foolish, silly,” considered modern U.S. colloquial, but it is attested from early 13c., from fool (n.).

[pullquote]Answer not a fool according to his folly, lest you be like him yourself.[/pullquote]Samuel Johnson defined fool as “one whom nature has denied reason.” To play the fool, he wrote, was to, “act like one void of common understanding.” Both come easily to the mind when contemplating how some current issues are portrayed by various commentators.

In Scots, a marvelllous language**, there are several words for fool: bawheid, cuif, gawky, glaik, gumf, ouf, and tawpie. Foolish is daftlike; to act foolishly is dyte, gype, gypit, menseless, taupie, and unwicelike. Daftlike is another word that appeals to me; daft is a word I heard a lot when growing up, sometimes in reference to me, but generally to the contemporary political situation. It still fits today, don’t you think?

Fool has different meanings in the Bible. In the Psalms, it says,

According to this site, the Hebrew word nabal translated here as “fool” suggests a lack of perception of ethical and religious claims. It’s used in a moral sense, not an intellectual one. It would be used to describe people who, for example, lie or deceive – making bad moral choices and deliberately misleading people – rather than people of little wit. But clearly fool has other meanings in the Bible. For example, this line from Ecclesiastes 10:14:

A fool also is full of words: a man cannot tell what shall be; and what shall be after him, who can tell him?

That’s the King James Version, a poetic reading but one laced with translation problems. The more modern English Standard Version is:

A fool multiplies words, though no man knows what is to be, and who can tell him what will be after him?

That’s actually a pretty powerful line; one that can easily be read into many issues, national to local. Foolish words sometimes do multiply, don’t they?

A fool takes no pleasure in understanding, but only in expressing his opinion.
Proverbs 18:2

If a wise man has an argument with a fool, the fool only rages and laughs, and there is no quiet.
Proverbs 29:9

Leave the presence of a fool, for there you do not meet words of knowledge. The wisdom of the prudent is to discern his way, but the folly of fools is deceiving.
Proverbs 14:7-9

Now I’m not a biblical scholar, and my Hebrew is more than a bit rusty, so I can’t say if the same word, nabal, is used in all of these sayings. There were other terms translated as “fool” in the Bible, including ewil (also evil) and kesil meaning thick and stupid, or letz, meaning scoffer (or scorner) and pethi (plural: pethaim) meaning simpleminded. These terms don’t all share the implications of evil or wrongdoing associated with nabal, yet all are frequently translated into English as “fool.”

In Shakespeare, fools – sometimes referred to as clowns – are often people who play the mythic role of the Trickster, like Loki, Mudhead and Raven. They may provide the springboard for dialogue or action. He also referred to fools in the professional sense: jesters whose job it was to entertain courts, nobles and royalty.

The fool in Shakespeare often acts as an important counterpoint to the drama of the play. Sometimes the fool is the smartest on on the stage, pointing out what the playwright wants the audience to see. Sometimes, he’s just a clown, there to emphasize how much smarter everyone else around him is.

and then Shakespeare deflates the fool’s pretensions…

The fool doth think he is wise, but the wise man knows himself to be a fool.
-Touchstone, As You Like It, V.1.2217

Perhaps it’s simply my age and upbringing that retains the potency of the epithet “fool,” and gives weight to the term “foolosopher.” They drip with contempt in a way mere profanity cannot. When I read some of the drivel I encounter online, I can’t help but think of these words and no better description seems to fit.

* Another useful word from that era is “knavigations” (OED 1590), which Samuel Purchase used to describe the false claims of navigators. It could be used equally well today to describe the false claims on some websites and blogs.
** Perhaps it’s from my mother’s Scottish heritage that I like Scots. Our talk at home was peppered with Scots words that I didn’t realize until many years later were not common English – when I used words like ken and ilk and produced blank stares.