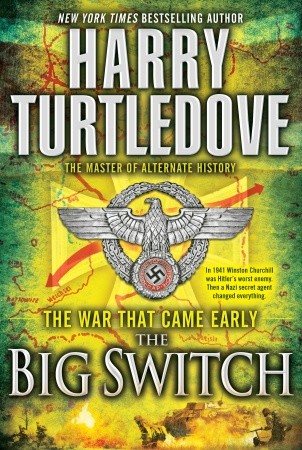 Bought a book at Loblaws (of all places) this week, one by Harry Turtledove: The Big Switch. It’s one of his many alternative history novels, about what might have happened if things had happened a certain way – a different way from what actually transpired – in the opening years of World War Two.

He’s written several in this vein and they’ve all been generally well received. I’ve liked what I’ve read of him in the past.

Many authors have taken up this sort of speculative fiction, although none as frequently as Turtledove. What would have happened if Hitler had invaded England? If the USA had not entered the war? If Germany had developed the atomic bomb? If India and the colonies had used the war to spark a rebellion against British rule? What if the USSR sent troops and materiel to Spain to help the republican cause?

I suspect every major theme in WWII has been explored in such speculative novels.

Every event in history is open to this sort of what-if debate. Since at least the 1950s, science fiction writers have been giving us alternate reality stories – that awkward neologism, Uchronia – where timeline-changing events have shaped a universe just like ours, but made different because of different choices or results. It’s a rich field, and great intellectual exercise.

Alternate history fiction offers different sorts of challenges to fiction writers, as opposed to say, scifi where writers can create their own new worlds. And for readers too, because the skeins have to be both imaginative and close enough to reality to make sense. Orson Scott Card’s Redemption of Christopher Columbus, for example, offers an alternate history world where Columbus is shipwrecked in the Americas, and rises to political power there. Fascinating stuff.

It’s always fun to explore the ideas, and to read what intellectual landscapes others have created around them. Such speculation is even captured in colloquial proverbs often called for want of a nail:

Those readers who are also M*A*S*H fans will recall the episode in season two called, “For Want of a Boot.” Shakespeare aficionados will think of King Richard shouting “A horse! A horse! My kingdom for a horse!” in Act V, Sc. 4 of Richard III.

Small changes can have ripple effects that run through to shape the larger history. or as Wikipedia says it, “a failure to anticipate or correct some initially small dysfunction leads by successively more critical stages to an egregious outcome.”

As the nursery rhyme goes,

We’ve all heard about chaos theory and the oft-cited butterfly effect in which a “a hurricane’s formation being contingent on whether or not a distant butterfly had flapped its wings several weeks earlier.” Small changes, large results. The results of our actions can have consequences we never dreamt of.

When I was a wargamer, playing out tabletop battles, I enjoyed playing the scenarios that offered what-if options. What if Hitler hadn’t sent two crack divisions to Greece and instead had them on the front line in 1941 when invading Russia? What if Germany started that fight in May, not June, giving an extra month of campaign time? What if Napoleon had Grouchy’s corp on hand at Waterloo? What if the Prussians had, as Napoleon hoped, fled away from the battlefield, not marched towards the sounds of the cannons? What if the French cavalry had not charged at Agincourt, and instead sent in its infantry and crossbowmen first? What if the Viet Minh had fewer heavy artillery at Dien Ben Phu? What if the French had more? What if the British had been able to hold the bridge at Arnhem? What if the Union had lost at Gettysburg? The Gauls won at Alesia? What if Pompey beat Caesar? The Romans failed to capture Jerusalem in 70CE? The Turks kept Lawrence from Aqaba?

Of course, the wargames focused solely on the outcomes of battles; not on the social, political and cultural upheavals that could follow. Even so, one cannot help but wonder what would have happened when the panzers took Moscow in the early winter of ’41…

I’ve enjoyed exploring similar scenarios with computer wargames and still have a few military strategy games on my hard drive I turn to now and then. Games like Civilization and Age of Empires also let you engage in some uchronistic gaming, albeit with less historical underpinning.

I’ve even tried my hand at some alternate fiction. I wrote a short story about what might have happened if the crew had not mutinied and Henry Hudson had returned home to England in 1612.

In 1999 and 2001, two volumes titled What If?, edited by Robert Crowley, were published (released as a single volume by Putnam in 2002). They contained essays by “eminent historians” on what might have been; what history might have looked like, if something had changed to alter the outcome. A drier summer for a Medieval campaign, bad weather for D-Day, a change of heart in Pontius Pilate, a Mongol sweep through Europe, Napoleon III hadn’t declared war on Prussia, Martin Luther had been tried and burnt at the stake… while a bit dry at times, the essays offer some fascinating insights into how history might have turned out, had something be a little different from what actually happened.

These essays are great food for thought if you ever wondered about such things.

Similarly, but in a more narrow focus, historian Ian Kershaw wrote Fateful Choices: Ten Decisions That Changed the World 1940-41 (Penguin, 2007) that describes in detail ten events that shaped the outcome of WW2. While not speculating about alternate history, Kershaw clearly shows how outcomes hinged precariously on some very specific moments.

But back to the book and the author. Turtledove has been called the “standard-bearer for alternate history.” I’ve read a few of his books in the past, but he’s a very prolific author and what I’ve read of him is a mere drop in the proverbial bucket of his output. Last one I read was a co-authored work with Judith Tarr – Household Gods – an alternate history Rome novel about a modern woman who goes back in time a couple of thousand years.

I suspect I’ll enjoy the WW2 novel, in large part because I’ve been hearing about, reading about, and studying WW2 ever since I can remember. My parents were veterans; so were their brothers and sisters. I lost family in the war. So I suppose it still has a special meaning for me.

The Big Switch has a 2011 publication date and was a remainder hardcover – it may be in paperback these days, but I believe I saw another copy in the bin where I got mine. Should you be interested (and local)… but you can also check the local used bookstores for a paperback edition.