For all of you New Agers who expected something momentous to happen, December 21, because an obscure, millennium-old calendar ended on that date, and are disappointed that the world didn’t end, I have four words for you:

I told you so.

Let me further educate you with a few choice bits of practical wisdom in case the lesson of Dec. 21 hasn’t yet sunk in:

Predictions, prophesies, ancient texts in languages you can’t read, messages muttered by self-described psychics, and the voices in your head don’t predict the future.

The position of the stars and planets, the lines on your palm, the bumps on your head, the fall of the tarot cards, the stone carvings of a dead civilization, and the entrails of a dead chicken don’t predict the future.

Crystals and magnets don’t heal you. Prayer doesn’t heal you. Psychics don’t heal you. Waving tuning forks over you, making exuberant flicking gestures over your sore limbs, sniffing lavender or clove, and sticking needles into your skin don’t heal you, because they aren’t medicine. A placebo effect may make you feel better for a while, but it isn’t a cure.

Chakras aren’t organs. Chi, prana, orgone energy and auras are not organs, or bones or any other part of the body you can touch, photograph, tune, manipulate or measure. They’re imaginary. 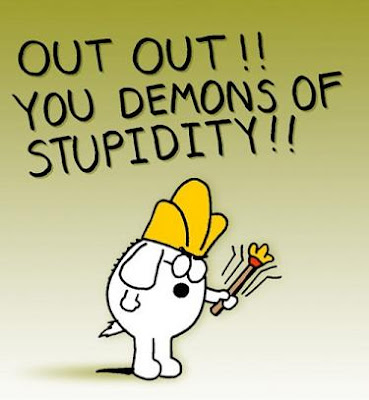 Your dog, your cat, your parrot, the police and your next door neighbour aren’t telepathic.

Obi Wan Kenobi isn’t real. He’s a fictional character from a movie. So was Commander Spock. People from your or anyone else’s past lives who give you advice today are fictional, too. Aliens who speak to people through brain implants aren’t real either. Crop circles are hoaxes made by human pranksters, not some alien artwork.

You weren’t abducted by aliens and had probes inserted into your orifices. You weren’t Cleopatra or Napoleon in a former life. You didn’t speed time in another dimension, on some astral plane or traveling out of your body. Those are just daydreams or hoaxes.

And lastly: the Mayans made a calendar. They didn’t carve a prophesy into the stone. All that claptrap about the end of the world was in your own imagination. You and your friends made it all up. You drank the silliness Kool-Aid. And we’re laughing at you. It’s a self-inflicted wound.

Now get on with your lives. You might want to start paying attention to science. Or economics. Politics. Mathematics. Literature. Anything instead of all this superstitious New Age claptrap you’ve been pursuing. Learn to think; be skeptical, question strange stuff that seems illogical because, if it includes crystals, auras, astral planes or angels, it is.

PS. Watch these characters. They will entertain you and you might get a little education at the same time: