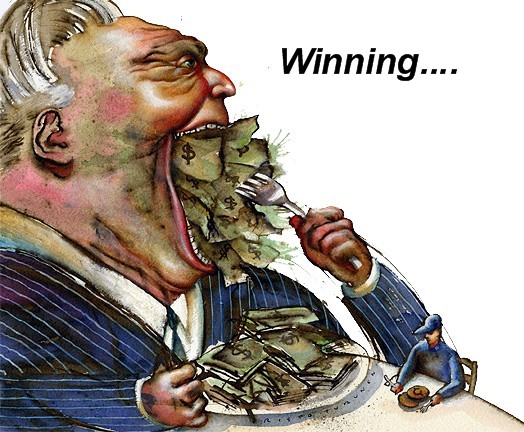 At its Dec. 13 budget meeting our perpetually greedy, self-serving council voted 5-3 to increase their own individual expense accounts from $4,000 a year to a staggering $5,500. That’s $2,000 more than councillors were allowed for expenses in 2014.

That’s a LOT of money for a council that has spent the last two years in virtual meetings, not attending events, conferences or activities in person. It’s not as if they need it for travel.

And guess who approves their expenses? Right: the mayor. You really think he’ll turn down his supporters’ expenses? Me either.

According to the story in CollingwoodToday,

Coun. Mariane McLeod clarified that the boundaries of what was going to be defined as “professional development” was also being expanded to include child care, which is part of the reason why the increase was proposed.

Professional development? In this lot? What utter piffle. Child care? Facepalm! Only ONE of them has children young enough to require anything like “child care” — Coun. Comi — and she voted AGAINST it, saying,

“I’m not in favour of that increase. In this day and age, there are so many webinars available and ways to manage your budget… I think it also ties into our ongoing climate change recommendations. We need to find alternative ways to participate in these events while reducing the carbon footprint.”

Comi is the only one, it seems, who recognizes that gallivanting around the country in pursuit of free meals and booze may not be an environmentally conscientious ideal for councillors. Not that such notions have stopped our own Queen of the Unlimited Expense Account, Coun. Jeffrey. Nothing like a taxpayer-funded expense account to indulge your sense of entitlement.

The increase to their expense accounts was originally proposed last November by — my what a coincidence! — Councillor Jeffrey, who enjoys being able to wine and dine at taxpayers’ expense at various FCM (Federation of Canadian Municipalities) functions despite the dubious benefit such expenditures provide to local residents. That was back when the early budget projected a 1% tax increase. Now, thanks to our council’s greed, it’s 2% and our soon-to-bugger-off-to-pursue-his-private-ambitions mayor calls it ‘responsible” and “responsive.”*

According to CollingwoodToday’s piece on that earlier meeting:

An amendment put forward by Coun. Kathy Jeffery to include an increase to councillor compensation expense accounts for training by $1,500 was passed 4-3 with Coun. Steve Berman, Coun. Mariane McLeod and Coun. Bob Madigan opposed.)

This time around, McLeod was all for the cash grab, and Couns. Comi,  Berman and Doherty were opposed. note that the original proposal made no mention of “child care,” and I doubt council watchers were fooled for a moment by McLeod’s attempt to spin it that way.

And, as you might expect, local media have been conspicuously MIA in addressing this issue. As they always are when a story that might embarrass friends in high places. Why actually report the news, eh?

So what do you think our councillors will spend their extra cash on instead of child care? New phones and new laptops for themselves? At least two of them have already used taxpayers’ money to enrich themselves with such baubles this term. Certainly they won’t be using it on daycare.

What with all the raises they keep giving themselves, it’s all just gimme, gimme, gimme at the council table these days. And they still haven’t fixed our crumbling streets, our broken sidewalks, our scruffy parks, our rotting lampposts, or even helped anyone or any business suffering from the lockdowns.

Little wonder Jeffrey didn’t want the town to hire a communications officer. I suspect communications professionals would have a stroke trying to put a positive spin on such blatant greed.**

* According to the story in CollingwoodToday, “The increase translates to an increase of $47.93 in taxes annually on median assessed home of $327,000.” But curiously, the reporter never asked where in this town you could find a house that would sell for $327,000 and on what that ridiculous figure is based. You can’t even find one at double that price. It’s all smoke and mirrors.

** Jeffrey is quoted in CollingwoodToday on Dec. 8 as finding a sly way to defer hiring a communications professional:

As part of Tuesday’s discussions, Coun. Kathy Jeffery put forward an amendment to remove an $80,000 expense for a new full-time communications co-ordinator position.
“I don’t think we’ve strategically addressed what we need to in terms of that portfolio, particularly in enhancing communications of council decisions,” said Jeffery. “I think we need to put some more thought into that.”

It surely is an inside joke. As if council actually put thought — any thought — into anything significant! Easier to defer and forget, and focus on giving themselves more money.

PS. This piece was written in early Dec. 2021, and originally published that month. However, it was deleted in late December when my abysmally bad host server, Godaddy, broke my blog through technical incompetence. I am in the process of trying to restore as many lost posts as possible. Some posts are being reconstructed from drafts and may not be identical to the original posts. Some may never be recovered. My apologies to subscribers who received and read this piece previously and I welcome any recommendations for a more reliable and competent server.