Grovel, Snivel & Fawn. You might think it’s the name of a law firm, but it’s the art of political sycophancy practiced by our own council.* It’s how our council behaved when the former, and much-disliked mayor, Brian Saunderson, took his leave from sucking on the municipal tit last week (it was not disclosed whether he will be paid for his brief, grandstanding appearance to accept the laurels from the committee).

One last time our council cabal eagerly and publicly grovelled, snivelled, and fawned over their Great Leader. And they did it so very well the council chamber floor must have been slippery with oil for many days after.

As noted in CollingwoodToday, Saunderson himself made a final statement to council that was typical of his self-gratulatory, imperious style:

“Thank you all for the support. We’ve worked together through some difficult times over the past four years and I think we’ve shown what collective will can do to overcome obstacles,” he said.

Collective will? His will and their obedience is more like it. Hive mind is the better term for this bunch of meat puppets. Note he didn’t mention any initiative he or the council had undertaken for the community’s betterment, didn’t speak to any accomplishments for the greater good this term. Not that there have been any.

I threw up a little in my mouth watching and reading about how abjectly council members metaphorically tugged their forelocks, frantically trying to outdo each other in their egregious praise over their beloved former mayor and bully. I’ve seldom seen such obsequious behaviour from a group of public officials outside the Politburo.

You can read about it on CollingwoodToday or watch the meeting video online. Either way, be prepared to hurl chunks over the oleaginous comments. Let me give you some examples. Here’s one from Saunderson’s marionette:

“I know you’re going to bring dignity, diligence, dedication and dad jokes to Queen’s Park and I look forward to hearing all of that,” said Acting Deputy Mayor Mariane McLeod.

There’s enough oil in her comments to keep all the vehicles in the town’s works department greased for the rest of the year. I expected her to get off her chair, bow down on the carpet to him, and kiss his ring.

You have been a stalwart, a champion and an ambassador for this community… 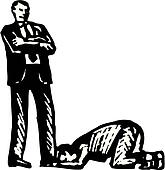 Me, too: I gagged. But Hull didn’t just say those few words and move on. No, in his usual fashion, he rambled on and on and on, showering Saunderson with praise and adulation from 00:08:28 to 00:11:54: three and a half minutes of grovel, snivel, and fawn! I was surprised he didn’t have the rest shouting hallelujah! or amen! at his every sentence.

But even though his body may have left the building (and you may have breathed a sigh of relief that he is no longer at the table to squander public money on his private vendetta while he refuses to assume the responsibilities of his office), Saunderson’s malevolent spirit stays on, brooding in the shadows.

In fact, just before he took his long-overdue “leave of absence,” he made sure that his sycophants would remain true to his myopic, vendetta-obsessed vision. He had them appoint his mentor, campaign donor, and lobbyist to the empty seat after he and the others bullied former Councillor Tina Comi out of office. Councillor Carrier — a much-disliked former mayor — remains as Saunderson’s éminence grise to watch over the rest.

* The phrase comes from the title of a chapter in a textbook on behavioural psychology, published just before WWI by Prof. Arthur P. Snodgrass. The subtitle was A Guide to Astute Political Sycophancy Within the Reaches of Elected Governmental Officials (Glastonbury-on-Thames, 1914). This book on the art of knowing what to kiss, and when outlined the basic rules for being a follower, avoiding having your own ideas, and always agreeing with your leader.
My sources suggest council was presented with a PowerPoint slide show outlining Snodgrass’ lessons during an in-camera training session at the beginning of the term, after which each member was required to swear a secret oath to be subservient to their Great Leader and to always grovel, snivel, and fawn in his presence.