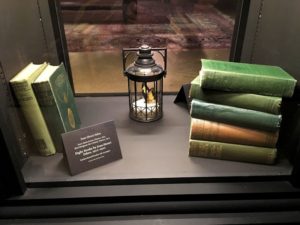 Tucked away at the bottom of a tall display case in the ‘At Home With Monsters’ exhibit at the AGO is a small collection of seven old, well-thumbed books, all by the 19th century French naturalist and entomologist, Jean-Henri Fabre. At the very bottom of the pile, its title almost hidden in the shadows, is The Life of the Spider, first translated into English in 1913, but not translated again until 1971.

The books subtly reflect the importance director and artist Guillermo del Toro places on insects in his works. He calls them “living metaphors” and adds, “They are so alien and so remote and so perfect, but they also are emotionless. They don’t have any human or mammalian instincts.”

I felt a certain thrill at seeing Fabre’s works, especially The Life of the Spider. That very same edition was the first adult book I ever read. I was nine or ten years old, maybe younger, stuck at home with some now-forgotten childhood illness, unable to go to school or out to play. I’m not sure where I got the book. Likely I had taken it out from the local library – probably for some science project or homework – and it was all I had to read that week in bed.

I read it cover to cover, absorbed in the minute details of the behaviour of Fabre’s spiders. It created in me a lifelong appreciation of these arthropods. I must have returned the book after that, because I never saw it again. But it was not forgotten. I was the only one in the gallery bent down, kneeling on the floor to read the book titles. 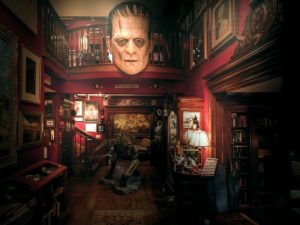 I had not expected to see this book in the exhibition – which features the monsters and the fantastic visions of writers, artists and filmmakers that appeal to Guillermo del Toro (including several from his own works) – but the sight gave me an immediate sense of familiarity, and of connection with del Toro. No one else I have known has ever read that book, or even knows of its existence. But del Toro does.
And like me, from childhood he loved (loves) the movies, books, comics, and images of monsters, of fantastic creatures, of the dark things that climb out of our imagination. This is a celebration of voyages to the edges of our mind, to the places where we leap away from the known into the impossible. Walking through the exhibit was like walking through an old, familiar place. Not scary at all, because you could feel his affection in everything.

Not that we’re otherwise alike, of course. del Toro is a successful and highly creative filmmaker and artist, while I am a retired curmudgeon who buys too many books and writes cranky blog posts. But still, that book… it connects us. 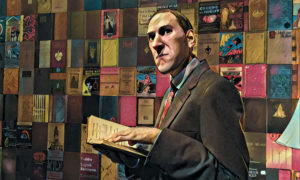 I grew up reading Edgar Rice Burroughs, Jules Verne, H.G. Wells, Lovecraft, Poe, Hodgson and other fantastic writers from an early age. Authors whose book covers were featured in a mosaic on one of the walls. Many of which titles I still have in my own library. Judging by those book covers, del Toro and I share many common reading interests.

I read Bram Stoker’s Dracula around age 11, and Hodgson’s House on the Borderland; I read Flatland, Struwwelpeter,, Edward Lear, Alice in Wonderland, Sleepy Hollow, the fairy tale collections of Andrew Lang and others around that time. I had boxes of ghoulish comics books and even the Classics Illustrated versions of some of my favourites, like Frankenstein and Moby Dick. I was reading adult science fiction by the time I turned 12,both contemporary and classic tales. I had the plastic model kits of the movie monsters and built them all.

(Seeing the life-sized mannequin of H.P. Lovecraft in one area inspired me to buy a book containing his entire collection of fiction, the very next day… I’ve read Lovecraft many times in the past, but not every story he wrote – now I have them all. (Sadly, although I admire his writing, as a human he was not to be much admired…) 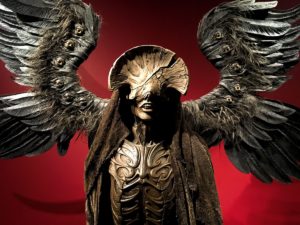 Until I was about 12 when we moved, I went to drive-in movies with my parents where I sat in the front seat and watched Roger Corman movies and Ray Harryhausen’s animations and a host of B-films on the big screen. A little later, I spent Saturday afternoons in a local theatre watching similar films. I watched the old monster movies from the 1930s, 40s and 50s on our B&W TV at home. I still like to watch them – and have written about them here many times. I watched the regular Alfred Hitchcock, the Twilight Zone and the Outer Limits shows on TV, too. 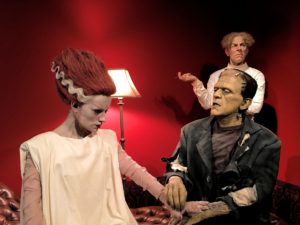 Few of these movies or shows scared me. Most weren’t realistic or frightening enough to do so – and very little in B&W can do it effectively (perhaps The Haunting of Hill House of 1961 is an exception). Many films use ‘jump’ scares to get a response, but that’s cheap trickery and easily overused. I was generally too focused on the makeup, the animation, the effects, the sets and, most of all, the stories to be scared by anything (well, okay: Corman’s The Attack of the Crab Monsters did give me the creeps for a while, but very few films of that era had a similar effect…). 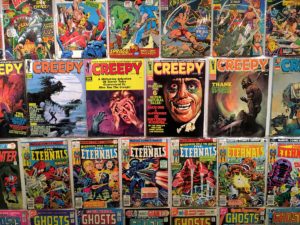 Maybe it’s because I was never inculcated with religious fears of angels and demons. Maybe it’s because I never saw death as something morbid or evil, but rather as part of a natural cycle. There were skulls everywhere among del Toro’s pieces. On a bookshelf I have an old glass skull and crossbones, of indeterminate age, which had been my father’s from his own youth. I have a small netsuke skull in bone and several artifacts from the Mexican Dia de la Muerte. I never saw skulls as demonic or ghostly, but rather anatomical items, as metaphors, and as reminders of our mortality in the “Alas, poor Yorick,” sense.

I’m not a fan of slasher films, however, and was relieved I didn’t see any of that in the collection, either. I don’t care for psychopaths and killers or excessively realistic blood and gore. They distract from the story, they disturb me. I’ve never seen Saw or any of the gory horror films of that sort. But monsters I love. I’ve seen everything I could find with King Kong, Godzilla, Frankenstein, Dracula, the Mummy, the Alien and the Predator franchises… I want to be mesmerized by the tale, to be in awe of the creature, to cheer for the brave, fragile humans who fight to overcome it. Not to cringe and look away from the blood and the torn limbs. 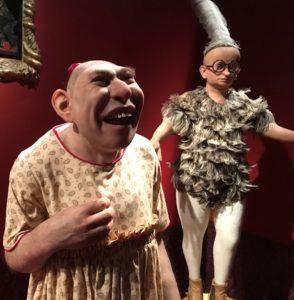 del Toro’s collection thrilled and entertained me. It was a trip back in time, reminding me of many moments in my youth, many of those dark delights in the movies and books. It reminded me that imagination isn’t limited, nor should it be constrained to worldly planes. I felt comfortable in the presence of his artifacts, comfortable they had been collected by someone who appreciates them, appreciates the ideas and stories and the effort to create them. I could live easily with a life-size mannequin of the Frankenstein monster in my home (had I such available space and Susan allowed it, that is).

And as much as I liked everything in the exhibition, I still found more delight in seeing that single book, The Life of the Spider, among his many pieces. I may never meet the man, I may never converse with him about our shared love of the genre, but that book told me that we had something deeper in common than just the “oooh, scary” effects of the monsters.