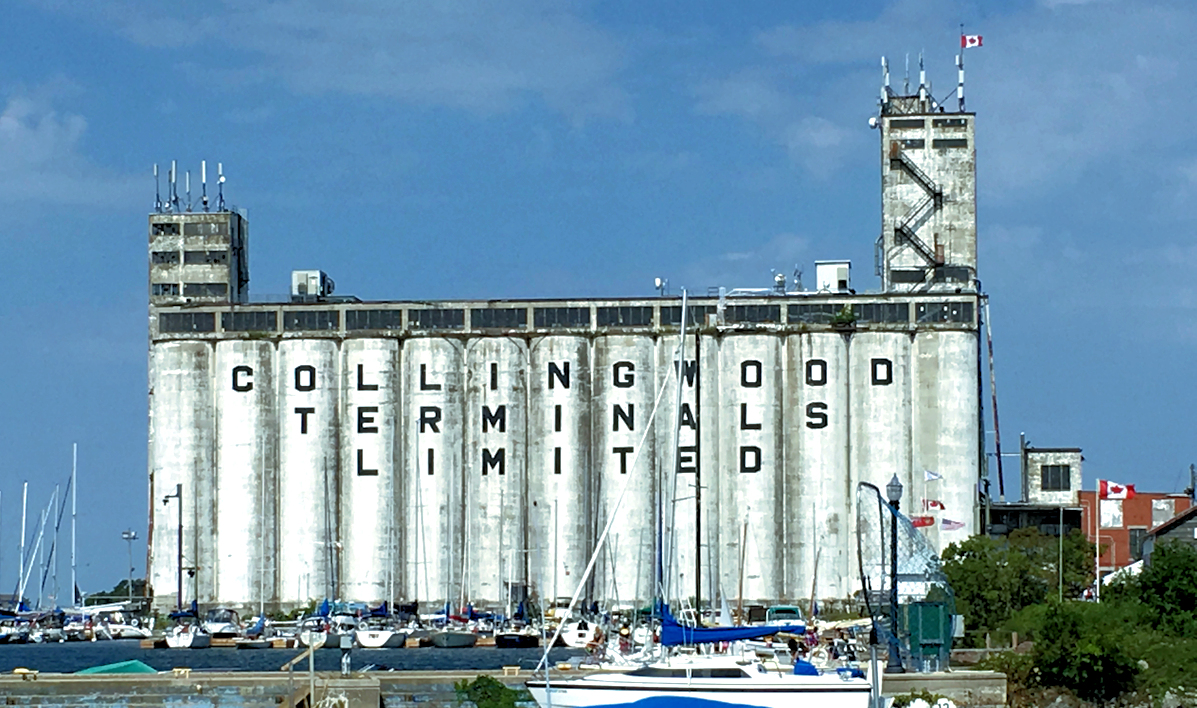 Everyone recognizes the Collingwood terminals, one of the iconic (albeit unused) grain elevators on the Great Lakes, but it is actually the fourth on our waterfront. The first three were wooden; the first one was built in 1855 and burned in 1862, the second was built in 1871 and also burned down (date unknown); the replacement third was demolished in 1937. (I’ve got pictures of the first and third, but not the second – although I have seen an early photo showing two elevators on the waterfront together).

Built in 1929, the existing elevators heralded a new era for Collingwood as the terminus of a great transportation network that brought grain from Canada’s western provinces to be distributed here to the eastern half of Canada and, once reaching the east coast ports, overseas. But it never lived up to its promise.

Shortly after it opened, in Sept. 1929, the Great Depression brought most commercial business to a standstill. Then, while the world was recovering, the Welland Canal opened (1932) and ships could sail directly from Port Arthur (now part of Thunder Bay) through to Lake Ontario. They didn’t need to stop and unload in Collingwood. The terminals still got used, but never in the volume expected.

Built to handle 10 million bushels of wheat a year, by the start of WWII, it was only handling about 2 million. The outbreak of war proved a brief boon for the terminals, though: grain shipments climbed to about 8 million bushels by 1945 and in 1948 52 ships docked there – one of its best years. But another change was coming: the St. Lawrence Seaway. When it opened in 1959, ships could sail directly from Port Arthur to the east coast. Business at the terminals plummeted.

The owners made several efforts to drum up business. They sponsored Western farmers to grow corn in the 1950s, but when the Ontario corn market grew in the 1970s, they went after the milling business, which remained its major work until the terminals closed.

The Beattie family, from Stayner, bought the building in 1973, then the Hamilton brothers bought it from them in 1987. The Yacht Club leased the land south of the terminals in 1974. Similar terminals in Midland and Port McNicoll closed in 1990, while Collingwood’s struggled on until 1993. The town purchased the site in the late 1990s. 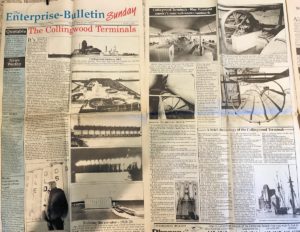 I am fortunate enough to have been inside the terminals, and more than once. When they were still owned by the Hamiltons, I got to go inside, take photos, and was given access to their archives for a feature article I wrote for the Enterprise-Bulletin Sunday (March, 1992 – see photo to the left). That small intimacy helped me develop a lasting affection for the building. Whenever I drive home from away, I like to come in through Duntroon so I can see the terminals standing out against the bay. It says home to me, to see them there.

They’re a monument to our past. And they’ve been rather sadly neglected through the years. Previous councils tried to fix them but found the costs daunting. Some tried to sell them – and found few buyers willing to pay a reasonable amount. The one good (and unsolicited) offer – to buy and renovate them into a hotel and condos – was rejected arbitrarily by a previous mayor. The offer never returned for council to deliberate.

And now we’ve learned that they are in desperate need of remedial work – and I believe cannot be sold ‘as is’ because to do so would still incur liabilities. That work could cost anywhere from $10 to $12 million – or more. The alternative – tearing them down – would cost at least $5 million. Upkeep just to maintain them will cost about $400,000 a year. Ouch!

So what do we do? Fix them or blow them up? I’ve heard arguments – often energetic, animated arguments – for both. There is no immediate answer – we have to wait for the final report on the condition of the wooden piles that support them. If they are oak and in good condition, then the structure can stand for a long time. If pine or decaying, then saving it adds a whole new dimension of expense to the project. 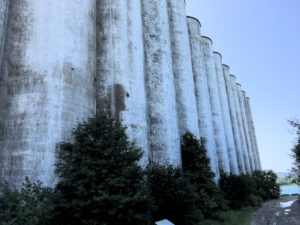 Personally, I want to see them stay. They’re symbolic of Collingwood and without them our waterfront would be anemic. But they’re in desperate need of a paint job to maintain even their cosmetic appeal.

One only need to look at the great, artistic photos of them by local photographers- like Jason Booth, Dave West and Rick Garner – to appreciate how iconic they are, how immediately recognizable they make us.

But to keep them means to fix them, and is a LOT of money – yet I doubt we can sell them without doing something to improve their condition. Would that this council had asked for a report at the START of their term instead of at the end, and they might have been able to do something positive… but if wishes were fishes, we’d all be throwing lines into the bay. Nothing was done this term – it’s been demolition by neglect – so it’s up to the next council to fix things.

At the very least, we need to put in the minimum expense to bring them up to whatever safety and health codes would allow us to sell them and in doing so, reduce any liabilities we have.

I’d like to see the town’s economic development office become aggressive about selling them, promoting them to commercial developers as the ideal location for a condo or hotel/restaurant (or a combination thereof). Chase every possible source of federal and provincial funding to restore them (I believe they still have heritage designation, so there may be some money available).

Any commercial developer that buys them will also need to install water/wastewater servicing, upgrade the electrical servicing, and rebuild the road. Also, what’s now a park on the north side was the repository of the contaminated soil from the harbour when it was dredged to clean it up, again in the 1990s. That may have some liability connected to it, as well (much like the shipyards had with its soil). 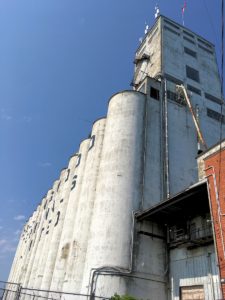 (We did try to sell them last term, and asked for proposals; two of them came without any serious money, and a third proved a scam… but perhaps we should have been more aggressive in our approach to selling them.)

There are cell phone and wireless antennae on the roof – the leases bring us in approx. $50,000 a year, but not enough by a long shot to pay for the maintenance. The roof – once buttressed and fixed – could hold solar panels too. But not until we decide what to do with them.

I’d like to see the town approach the cell phone companies to engage them as possible investors in the building – at least in its maintenance (without it, they’d have to build many smaller towers all over the area to get the sort of coverage antennae on the Terminals offers).

I don’t support tearing them down if the supporting structure is sound. What purpose would that serve? And I can think of better ways to spend $5 million. But I can’t see them as a publicly-owned facility since there’s really nothing for the public to access or use. And iconic or not, I hate to see them just sitting there. So selling them seems the best option.

But once again as your next Deputy Mayor, I’d want to hold public meetings to get the ideas and suggestions from residents before council made a decision. Unlike Brian Saunderson and his Block, I believe that no public asset should be sold without public consultation (he and his group sold our electricity utility and our airport without ONE public meeting in four years!).

Our biggest challenge will be finding the money to do something with them. Saunderson and his crew sold our airport for $4 million (about $2 million less than its last appraisal), and Collus, our electricity utility, for $25 million. Out of the latter we have to pay Alectra (formerly PowerStream) $13.1 million for their share, and pay back more than $8 million in loans Collus took on, so we may get somewhere around $4 million from that sale. Saunderson’s Vindictive Judicial Inquiry will cost at least $2 million and possibly more than $6 million (once we include the costs of moving treasury staff into leased facilities…). At the end of the day (assuming we don’t have to pay a commission to the sole-sourced lawyer hired to sell Collus!), we will have between $2 million and $6 million left from these sales. It’s not enough.

So the challenge for the incoming council will be to find the rest of the money needed to fix the terminals, and to do so without dumping the burden on local taxpayers. But first – before we spend any money, we need to hold a public meeting to get a better idea what people want.

Collingwood deserves better – and you have a chance to make that happen this election.