Two more of our local “basket-of-deplorables” incumbent councillors (aka quidnuncs) have filed their papers for re-election: Steve Berman and Kathy “Me! Me! Me!” Jeffrey. So has former councillor Cam “Sleepy” Ecclestone, who announced he was running in the provincial election for the fringe “Consensus Party” then never appeared on the ballot.

Readers will recall that both Berman and Jeffrey willingly participated in the bullying of former councillor, Tina Comi. Both signed identical copies of councillor McLeod’s complaint to the town’s integrity commissioner. Both defended their bullying in public comments. Then they appointed a friend, campaign donor, and lobbyist in her place.

Berman and Jeffrey also participated in our former mayor’s spiteful, puerile vendetta by voting to rescind Ed Houghton’s Order of Collingwood award, granted more than 20 years ago for service to the community. Then both voted to have a petty, nasty letter sent to his employers and other Ontario municipalities announcing how small-minded our council was in revoking the award.

Bullying and petty vindictiveness alone should make any voter shudder with apprehension that they might be returned to the table. We have a morally and ethically bankrupt council and not a single one deserves our respect, much less our votes. But let’s look at their political history to remind us why. We’ll start with Berman, first, and next post I’ll deal with Jeffrey, then Ecclestone. 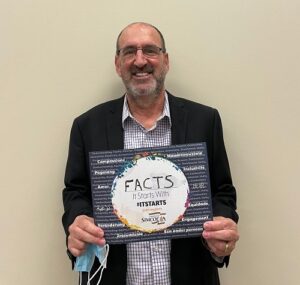 Berman’s contributions to the collective good have been…. well, insignificant enough that I couldn’t find any of note. He hardly ever gets quoted in local media, mostly because he sits looking like a deer in the headlights during meetings, with little to say worth repeating even in our flaccid local media.

He has consumed the oxygen in the council room with the best of them, however, while sucking at the public tit for the past four years. But giving back to the community? Initiative? Competence? Not so much. Well, not at all.

Aside from bullying Coun. Comi out of office, Berman is mostly known for raising the motion to censor (disingenuously called “fact-checking”) public comments on town social media and documents such as letters to council to ensure they conform with the official narrative. His motion was passed by council in Feb. 2021, and he’s likely hoping the public has forgotten his piece of neo-Stalinist legislation. But we haven’t.

Berman was apparently untroubled by the inconvenient guarantee by the Charter of Rights and Freedoms that everyone has the right to “freedom of thought, belief, opinion and expression, including freedom of the press and other media of communication.” And that the Canadian Department of Justice noted, “…the Charter also protects the expression of both truths and falsehood.” But it was never about facts: it was always about controlling the narrative. Berman’s motion passed because all of Saunderson’s sycophants wanted to make sure there were no challenges, no dissent, and no differences of opinion towards their conspiracies.

We also remember Berman prior to being elected when he ran a blog that angrily spewed disinformation, conspiracies, accusations, and virulent criticism at the 2010-14 council and town staff. Not at all hypocritical, eh?

In March 2021, Berman suggested he wanted to get rid of the “consent agenda” — that portion of the council agenda where the “fact-checked” public comments are put into the public record. In that meeting, he whined, “There is not a requirement for a consent agenda in the Municipal Act. We’re not doing anything we’re not allowed to do.” Open? Accountable? Transparent? Engaging the public? Not him.

Berman will also be remembered for publicly walking out of Coun. Comi’s presentation to council on International Women’s Day (Feb. 24, 2020) because Comi cited Mayor Sandra Cooper as the town’s first female mayor (so much for the credibility of Mr. “Facts”). Hardly misogynist at all, was that?

Who can forget when Berman let loose with what will be remembered as his most quotable epigram this term:

One plus one equals two.

Churchillian words of wisdom from our councillor. I’m sure that will be on the internet quote sites soon.

Berman recently tried to get media and public attention by making a motion for the town to comment on the US Supreme Court’s decision to overturn Roe v Wade. But not right away when the event happened. “In the coming weeks,” he said. And weeks, and weeks (nine now). As if a small town in Canada had anything crucial to say about the fight over abortion rights in another country. No one was fooled by his diaphanously desperate attempt to get publicity: we remember his past misogyny. Notice that he didn’t try to do anything about ensuring women’s reproductive rights here.

In Nov. 2021, CollingwoodToday asked all council members to give “their thoughts on what they had done on council, what they hoped to do, what challenges they faced, what they thought was their “enduring” legacy (stop laughing!) and whether they planned to run again.” This was an uncensored opportunity to say what they considered council’s greatest achievements this term. Berman didn’t reply. Either he couldn’t think of any accomplishments (none of his own, anyway, since they are in absentia), or he was just showing disrespect to local media through his silence.

Berman made a motion in March, 2021, to have the town’s highly-paid CAO “sift through old COLLUS documents kept by EPCOR” looking for evidence in council’s conspiracy mania to prove wrongdoing by those former staff and council members who were targets of Saunderson’s obsessive Vindictive Judicial Inquiry. Those emails had already been subpoenaed, read and sorted through by many inquiry lawyers and the OPP without finding any such evidence. But Berman demanded the top town staff person waste her time and taxpayers’ money doing it again. There were 379 boxes of papers, plus 100 binders to search. And guess what staff found? Right: nothing.

Berman was one of the seven who voted last summer to continue to waste taxpayers’ money on our former mayor’s vendetta (aka the Saunderson Vindictive Judicial Inquiry), throwing even more money at the mayor’s and Coun. Hamlin’s former employers in yet another a sole-sourced contract, more than a year after the inquiry closed and more than six months after the final report had been received by the town. But the vengeance-obsessed council just couldn’t stop spending our money on it. Or on the mayor’s former employers.

Berman was an eager supporter of Coun. Bob Madigan’s attempt to make council meetings more like the Soviet politburo, by removing all traces of spontaneity and individuality. Back in June 2021, Berman whined that Madigan’s motion “didn’t go far enough” in suppressing initiative.

And then the same guy who wants to “fact-check” everyone else made a statement about the former council deciding to sell a share in the public utility in one hour which is about as far from the truth as one can get and still be within the Solar System. Mr. Facts, eh?

In May 2018, before he was elected, Berman filed a complaint to the town’s Integrity Commissioner after Mayor Cooper voted against spending $100,000 of taxpayers’ money to hire a consultant to help with the Collingwood Regional Airport sale, although she had no legal conflict of interest in the sale. The IC “found no cause for sanctions against Cooper.” When his beloved Saunderson voted six times for sole-sourced contracts to his former employers over two terms, Berman was silent. Hypocrisy much?

To sum up: Berman has resisted efforts to rise above mediocrity this term. He seldom contributes to council discussions about complicated or challenging issues. Without having Saunderson to tell him what to do and how to vote, Berman has been politically adrift at the council table. Not that it made any difference council watchers could discern, since he had long been ethically rudderless. His contributions to the greater good have been somewhat less than negligible. But, if you want a mediocre councillor whose main role at the table is to consume oxygen, vote for Steve.