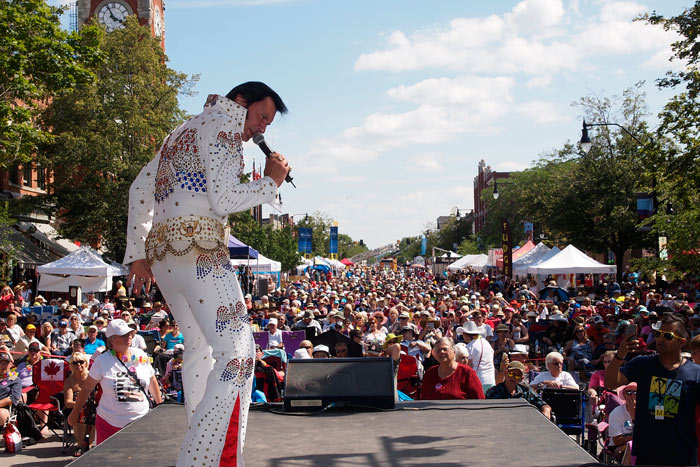 I miss Collingwood’s Elvis Festival. It was a weekend full of visitors, friends, music, entertainment, dancing, and fun. But it was killed in 2019 by a council that dislikes others having fun.

Elvis was too loose, too free, too liberal, too wild for their puritanical tastes. Couldn’t have people dancing and singing in the streets, drinking, laughing, and enjoying themselves, could we? Fun, it seems, can only be something our dour, Soviet-style council mandates, and only under the strictest supervision and oversight.

The Elvis Festival was a kitschy delight that drew thousands to the town, gave the community worldwide publicity, filled the restaurants, bars, and hotels. It gave a much-needed economic boost to the business community. And our council didn’t like that, either, because they couldn’t take credit for it. It wasn’t their idea, so it had to die (not that they’ve had any positive, community-building ideas of their own, but they did come up with the idea to create a water “crisis” that killed new construction and building industry jobs for the next four or five years).

The town’s most recent report on the festival (from February 25, 2020) states council was going to “move on from the Collingwood Elvis Festival (CEF) as a municipally-funded event.” Well, that’s not factual. Council didn’t move anywhere, much less forward. It simply sat like a grumpy, spiteful troll under a bridge as it killed the festival. No serious effort by council (or staff as far as I am aware) was made to create something new, something better, something big and exciting, or something that might be a fraction as successful.

It was killed by people who disliked others having fun.

The town’s page doesn’t comment on the festival’s success for 25 years, on the international media it attracted, on the happy crowds that attended every year, or the positive local economic impact. No, it just gives a sorry excuse for failing to “move on.” “Sorry excuse” will be this council’s epithet, methinks.

Municipally-funded? The cost of the festival to taxpayers was minimal* and did 1,000 times more for the good of the community than our mayor has done. A million times more, I’d argue. In fact, our entire council hasn’t collectively done as much for the community’s economic or social benefit this term as a single weekend of the Elvis Festival did. But they keep giving themselves raises for doing nothing.

It was never about saving money: since 2015 this town has spent more than $10 million on the Saunderson Vindictive Judicial Inquiry (aka the SVJI) without the slightest concern over the waste. This Elvis-killing council continues to throw lavish amounts of taxpayers’ money at the SVJI, even though the events it covered are a decade or so old, and the inquiry’s report was handed in more than 18 months ago. The Elvis Festival could have been funded at its most expensive for the next decade for a tenth of what has been spent on the mayor’s vendetta. It was never about money.

Killing the Elvis festival was all about making sure no one enjoyed something that council and their friends didn’t like, didn’t approve of. If they don’t like it, no one else can.

Admittedly, after 25 years, the festival was getting a bit long in the tooth and needed refurbishing. Not a new idea: several years earlier, the festival committee floated ideas about how to revitalize the event, expand it, make it more attractive, more inclusive. A visionary council, a council that saw the benefits of events and the economic boost they give the community, a council looking forward not backward would have pushed for such a revitalization, looked for ways to improve, augment, and enhance the event.

This council just killed it.

A community-minded council would have reached out, engaged the public, asked for ideas and suggestions to make it better, created a committee of citizens and business owners to explore them.

This council just killed it. (Admittedly, the idea of this secretive and deceptive council actually engaging the public over anything is ludicrous. When did the Politburo ever ask the masses for advice?).

A wise, fiscally savvy council would have understood that in the festival they had a goose laying golden eggs, and that it would only do better for the whole community if supported and encouraged.

Instead, this council killed it.

I get that not everyone enjoyed the event. So what? That’s the nature of events. You cannot create one that satisfies everyone’s tastes or needs (no matter what the Soviets tried, they failed to homogenize their population through dull, state-approved culture).

And it was only for a weekend. Surely our community is mature enough to tolerate others having fun for a few days.

Not our council, though. They killed it.

Of course, recognizing that killing the event would cause a great loss of business and income to the town’s (and area’s) hospitality sector, and would cause a loss of income to workers, servers, and other employees who were called on to work that weekend, our council immediately stepped up and did… nothing.

Absolutely nothing. What was done to find a suitable replacement, to create new events or rival to surpass the Elvis weekend’s impact? Basically nothing. A flaccid attempt to shove the responsibility onto the private sector died and council responded by… you guessed it: doing nothing again.

Given that this council also never provided any substantial financial support to local businesses or workers affected by the pandemic lockdowns, that’s hardly surprising. They are adept at doing nothing, experts at it, at least when it comes to something that could benefit anyone except themselves.

Yes, we have other events here (the Collingwood Summer Music Festival is one), but nothing with the same panache as the Elvis Festival, nothing to generate the sort of excitement and publicity, nothing to attract international media, nothing to fill the streets withing singing and dancing people. And for that, I suppose, the puritans on council rejoice.

I miss the Elvis Festival.** July in Collingwood isn’t the same without it. It was good for the town and it could have been even better. All it required was a council that could think of the community’s benefit, not just themselves.

But I also miss a visionary, engaged, community-minded council that was open to ideas, sought advice, and worked for the greater good. We last saw one in 2014. Maybe we’ll get one next election, as long as we elect a new crew.

* The annual cost was a fraction of the price to run even a single full-page ad in a national newspaper. The festival drew many more visitors than mere advertising ever could. In 2019, the cost to the town was an exceptional $122,000 according to BarrieToday. The usual annual cost was $45,000-$50,000 or about the same as the mayor’s annual salary. I’m sure many taxpayers would rather have Elvis here year-round than our high-spending mayor for even a day longer. The town will spend at least $1.55 million building a splash pad on top of the Harbourview Dump that won’t be used in a year by nearly as many visitors who came here for a single day of the Elvis Festival. The mayor’s and Councillor Hamlin’s former employer, BLG, will likely get more money (sole-sourced, of course) from this council than the festival would have cost. It was never about money.

** Of course I am aware that the festival would not have been held during the pandemic. But it could have been something to forward to for 2022: another re-awakened activity to anticipate for when the lockdown is lifted and some form of normality returns. Had it not been killed, that is.