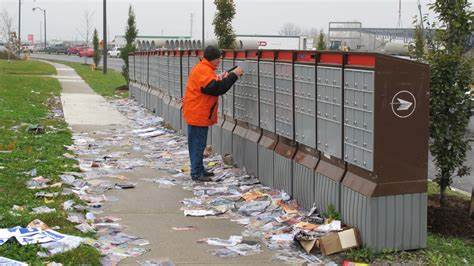 I recognize that we all like to apply labels to categorize things, as shorthand in communication and in conversation, and to identify common views and beliefs. I do it myself; we all do: labels are our everyday metaphors. They are fast and easy shortcuts. But I weary at times of trying to explain to people that the unsolicited material they get in their mailboxes several times a week is not simply “junk” mail to be tossed into the recycling bin without another thought.

Or worse: at their community mailboxes some people simply litter it rather than taking it home to dispose of properly; leaving it for others to pick up, or to scatter around the neighbourhood and make everything dirtier, as shown in the image above. Littering is reprehensible, immature, anti-social, and anti-Canadian behaviour no matter what is being littered. But I digress.

I, on the other hand, look through my admail every time, every piece; I look to see who is advertising, what the offers are, and look at the printing and design — even the spelling (is it Canadian or American?) — of each piece with a critical eye. I look at the typefaces, the graphic elements, how the coupons are perforated, even when the subject (such as discounts on meat, metal roofing, or fast food like burgers) does not interest me. It’s difficult to shed habits built from working decades working in print and media.

Perhaps it’s because I was raised in an era when a lot more advertising came by mail than today that I see it in a different light.

Back when I was a youngster, the arrival of some of this advertising material – seasonal catalogues from Eaton’s and Simpson’s, for example – was greeted with excitement and pleasure. I cannot count how many fall days did my brother and I pore over the toy sections of these catalogues looking for the presents we hoped to get in the coming Christmas. We carefully compared the offerings from each company to determine the best deal on toy soldiers and model kits. Or the titillation of my early pubescent years looking through the pages of lingerie and women’s undergarments. The mysteries unveiled in the pages of power tools, TV sets, and home furnishings. The fashion trends for upcoming seasons (in which I never participated but enjoyed critiquing). There were both education and entertainment in catalogues.

Back then, of course, I read a lot of advertising with a sense of wonder that my later, cynical years have long erased. Back then, I read the offers on cereal boxes, on milk cartons, in TV guides, in comic books, on matchbooks, and even in the British magazines and comic books my grandparents would send over regularly (I eagerly anticipated each shipment of The Beano and like magazines for many years). I never considered it an imposition to have advertising in or on anything, but rather saw it as just another thing to read.

Would that I had saved the X-ray glasses, Rat Fink decals, or the magic decoder rings I purchased through those ads.

Yes, what we get today in the mail (admail is the proper neologism) is advertising and it may not appeal to you at the time, but advertising isn’t junk: it’s merely one form of communication from businesses, services, government ministries and agencies, medical services, real estate agents, and even politicians. And it is not meant to annoy recipients, but rather to inform them.

Perhaps the next time you get some in your post box, you will take a look at your admail with a more knowing, less dismissive eye, rather than just chucking it into the bin: think about who it employs, what local businesses it profiles, and maybe even consider how well it is designed. And maybe even consider what it offers.
~~~~~
* According to Canada Post’s guide:

Neighbourhood Mail is one of our targeted direct mail services. It consists of printed and non-printed matter such as product samples that are not addressed to specific addresses in Canada. The service provides the delivery of information and/or advertising material to more than 15.7 million mailboxes. Neighbourhood Mail provides geographic, demographic and lifestyle information to target mailings to neighbourhoods or areas that have the highest potential audience – without a customer database.

** I used admail myself during my several election campaigns, as did most other candidates. In an at-large election system such as we have, it is nigh-on impossible to physically visit every household in the municipality, so sending a flyer or rack card via the mail was an efficient way to reach voters. However, it should be noted Collingwood is well overdue to mature into a proper ward-based election system like other grown-up municipalities use.