In recent months, I have developed an interest in lichens: wondering what species live in our area, how and where they grow, which plants are their competitors or companions, why they grow where they do, what they live on for nutrition, how they reproduce and spread, what lives on them, and their microbiology.

Small, innocuous plants you may mistake for a discoloration on rock or even a disease on a tree, they are nonetheless very common throughout our local environment. In fact, lichen have been found on every continent, including Antarctica, which has earned some of their 20,000 species the classification of extremophiles. Ontario has around 1,100 species of lichen, with several new species having been found within the past decade (you can see pictures of more than 850 of these on the inaturalist.ca site).

I have to admit up front that my knowledge of botany is modest, and of lichens even less.  I’ve long known the basics, but not the details of both (so there may be unintended errata from that slim understanding in my post). But I’m keen to learn more, and I’ve always found science interesting. And lichens are definitely interesting. The more I read about them, the more fascinating they get.

All these years I overlooked them in the
racket of the rest, this symbiotic splash of
plant and fungus feeding on rock, on sun,
a little moisture, air — tiny acid-factories
dissolving salt from living rocks and
eating them.
From Springtime in the Rockies, Lichen by Lew Welch, poet

I became intrigued by lichens on seeing how well some reddish-orange species had colonized the rocks along the waterfront (Heritage Drive) here in Collingwood. I started to look more closely at the colonies, and wondered why one species thrived on some rocks while another, whitish-grey species seemed to thrive on others. And why some rocks hosted both. Are they just two or more species, and how do I distinguish them? Arre they cooperative or competitors?

And then I started paying attention to lichens elsewhere as we walked through the streets, parks, and trails around town. I found them on other rocks in gardens and woods; on branches, leaves, and tree trunks; on rotting wood on forest floors: different colours, shapes sizes, and habitats, sometimes very specific environments (some lichen only grow on Red Oak bark, for example). Lichens can grow on familiar structures too, including wooden fences, bricks, concrete, and cemetery headstones.

Look carefully, and you can find lichens in many locations locally. I’ve found them on rocks and trees, and, although I have yet to identify any, there are lichens that grow on soil. I just need to look for them (once the warmer weather comes, I’ll be looking over our garden earth for them). I also started taking photographs of those I’ve seen, hoping to be able to identify the species later. 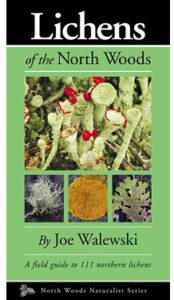 My curiosity also drove me to look online and in bookstores for some information and guides, both to read at home and to take with me when I next went looking. And while I’ve found a lot online, I so far have purchased only one book (Lichens of the North Woods by Joe Walewski). While it’s a well-organized, well-presented field guide, it’s not for my own region, but a region northwest of me by a few hundred kilometres. Still, I believe there should be sufficient overlap and similarities that will help me identify those I find here. I’ve not been able to find more localized books yet that focus on this region. But I’ll keep looking.

I’ve also joined some related groups on Facebook in the hope their enthusiasts and aficionados can help me identify local species, as well as direct me to the best resources so I can learn more.

Among the things that fascinate me about lichens is that they are not a single organism, but are symbionts: composite plants that include fungi and single-celled algae, or less commonly cyanobacteria (and sometimes both; these partners are called photobionts because they use photosynthesis to create their own food).*

Recent studies have also found that some lichens have yeast cells living within them as well. The cohabitation of these various plants provides a mutual benefit to all the components, but in turn, it changes the form and the biochemistry of all the partners. Some botanists argue that lichen are not mutual symbionts but rather that the algae are a form of parasite. It’s an argument that is a bit technically beyond my ken to appreciate fully and requires more reading.

In essence, sometime around 400 million years ago, fungi learned to farm algae for food. In fact, it appears that different fungi evolved the relationship with algae independently.  And over the last 250 million years, lichen and their hosting fungi have changed considerably (although some of the modern forms may have been around for at least 200 million years!). So to fully understand lichens, I’ll need to read some paleobotany, too.

Lichens have been called “fungi that discovered agriculture” by Trevor Goward, the lichen curator at the University of British Columbia Herbarium. But if the fungi are the farmers, the algae also benefit from the relationship by receiving water and minerals from the fungi. And lichen can survive where neither of the partners can survive alone (algae, in particular, are usually found in or close to water, or in moist and damp environments).

Although some forms have been called “moss,” lichens are different from moss, and are not technically even a plant (but it’s awkward to call it “plant-like”). A lichen is neither a fungus like a mushroom nor a vascular plant like grass, flowers, and trees (plants that transport sap and water within themselves). However, like mosses, they reproduce without developing either seeds or flowers, so both are “cryptogams,” as are liverworts, fungi, and algae.

The fungus in lichens forms the body of the plant and determines the shape of the lichen. The algae live within it. The body (the visible and prominent part) is technically called the thallus; the type and shape of the thallus are used to classify the lichen into commonly recognized categories: fruticose, foliose, and crustose are apparently the most common. The protective, external skin — made from tightly-packed fungal filaments — on some lichen (on the top, bottom, or both) is called the cortex, and this is where the yeast usually live.

The algae or cyanobacteria live near the top surface (under any cortex) and provide the food for the lichen through photosynthesis. These algae also usually determine the colour of the lichen (at least when wet).

Yeast cells on lichen may produce chemicals to help lichens ward off predators and repel microbes. I’m not sure if the yeast cells have a symbiotic relationship with the fungi or algae, or if they are simply opportunistic colonizers.

In between the cortex layers and below the algae is the medulla; a zone of less-tightly-packed filaments. Some lichens, especially those that live on rocks, have root-like filaments that anchor the lichen to the rock surface, called rhizines. I would need a microscope to properly examine these elements more closely, but for now, I’ll have to depend on images in books and online. I’ve never attempted to pry any lichen up from its environment to see it that closely, and don’t intend to at this point. Photographs will have to suffice for now.

I’ll also have to learn more about related forms of plant life, including liverworts, hornworts, and mosses (all classified as bryophytes), and fungi (itself ranging widely from yeasts to mushrooms), in part to be able to distinguish between them, and understand their relationships in the environment. All this learning will give me more opportunity to read, and readers here know how much I value reading about pretty much everything. The microcosm awaits.

Our world is made up of a myriad of microcosms, of tiny worlds, each with its own habitués, every one known to the others.
Louis L’Amour, Education of a Wandering Man

* Humans are also symbiotes, with a whole microbiome of bacteria living within and on us, without which we cannot survive. Even our individual cells are symbionts, when ancestral bacteria absorbed the mitochondria within them between 1.7 and 2 billion years ago for a mutually-beneficial relationship that still works today.

And if anyone has any resources to suggest for my learning, or books to offer, I would appreciate it.