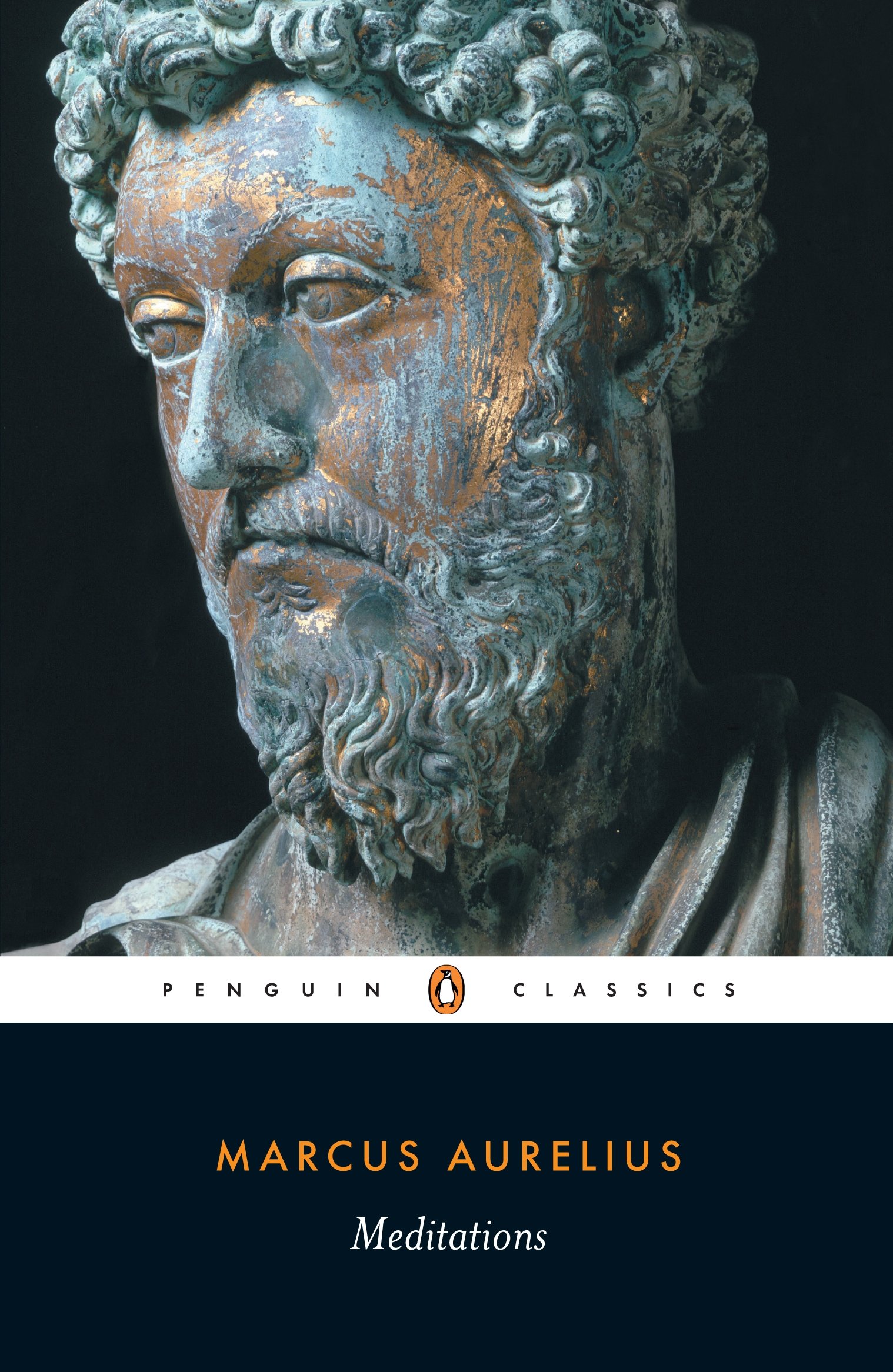 Perhaps the most famous work by any Stoic is the Meditations, written as a series of notes-to-myself by Roman emperor Marcus Aurelius.  I’ve been reading a lot of Stoic works of late, and this remains my favourite. Although never meant for publication, just as reminders to himself, it’s full of wonderful, inspiring comments. And some seem eerily prescient in our current municipal calamity. For example, Book Two opens with these words:

Begin the morning by saying to yourself, I shall meet with the busybody, the ungrateful, arrogant, deceitful, envious, unsocial. All these things happen to them by reason of their ignorance of what is good and evil …

While I don’t know if Mayor Cooper or Councillor Lloyd have ever read the Meditations, I suspect they start each council and standing committee meeting with a silent thought that is remarkably similar to those words, even though they were first written between 170 and 180 CE. Coincidence? Perhaps, but it sure reads to me like an uncannily accurate description of The Block: meddling, ungrateful, arrogant, dishonest, jealous, surly… it has all seven of them nailed (however, we might add somnambulant, feckless, secretive and supercilious just for accuracy…)

You can read the entire work of his – twelve short books – in a somewhat dated translation on the MIT classics site. I recommend you consider buying a more modern version, however. Here, for example, are the lines from the Hays, 2002, translation of that piece:

When you wake up in the morning, tell yourself: The people I deal with today will be meddling, ungrateful, arrogant, dishonest, jealous, and surly. They are like this because they can’t tell good from evil.

It’s not just that The Block can’t tell good from evil, however. Those few among them who can recognize the difference choose only what serves their own interest, regardless of whether it is good or bad for the community. Marcus Aurelius continued with a warning to,

…stop being aimless, stop letting your emotions override what your mind tells you, stop being hypocritical, self-centered, irritable.

Such words of wisdom are wasted on The Block, of course. Those are attributes they have honed to a fine edge within themselves. Hypocrisy is their collective forte.

Give thyself time to learn something new and good, and cease to be whirled around.

More words wasted on a group that steadfastly refuses to read, to learn, to explore new horizons or even consider another’s opinions, let alone facts that contradict their preconceptions. And they certainly won’t go anywhere near something good if it means good for the community. If it’s good only for themselves, they’re on it like ants on a picnic, of course.

Whirled about? They’re worse than blindfolded children at a piñata party, hitting out at everything. And what single, good thing have they accomplished this term? Right: nothing.

Let no act be done at haphazard…

After more than two and a half-years of collective stumbling, fumbling and bumbling blindly and aimlessly, we know The Block cherishes the haphazard, the ad hoc, the unplanned, avoiding any thought of consequences and the random acts that are the landmarks and legacy of this term.

In Book Four, he advises:

Search men’s governing principles, and consider the wise, what they shun and what they cleave to.

Are the overtly selfish, myopic, antisocial, pro-patronage, self-entitled sentiments of The Block actually “principles” or just bad attributes? And what The Block shuns is openness, accountability and transparency.

The things you think about determine the quality of your mind.

A group of people thinking about what the world owes them, what they can grab from power, how they can use tax dollars for their own secretive purposes, how they can reward their friends, how they can punish their opponents, how they can hamper others and put up roadblocks… dark quality of mind, indeed. If they actually do think. It is open for debate.There is some reason to believe their behaviour is merely instinctual, like a caterpillar eating leaves,  or an eel returning to its spawning ground.

In a sense, people are our proper occupation. Our job is to do them good and put up with them.

Precisely the opposite of what The Block believes. They collectively believe their job is to feather their own nest, achieve their own agendas, pursue their own vendettas. To achieve those ends, everything they have done this term has led. Doing good for others was the job of the previous council.

Take heed not to be transformed into a Caesar, not to be dipped in the purple dye, for it does happen. Keep yourself therefore, simple, good, pure, grave, unaffected, the friend of justice, religious, kind, affectionate, strong for your proper work.

Such advice comes too late for The Block. They grabbed at power and promoted themselves and their own interests as if they were feudal nobility. They raised their own salaries three times so far, while raising the taxes of everyone else as many times. And gave nothing back to the people in return.

…every man is worth just so much as the things are worth about which he busies himself.

The Block busy themselves with secrecy, with petty, trivial things, with selfish pursuits, with blocking the works of others, with hampering our hospital, with sneaking and conniving and scheming behind closed doors, with annoying our municipal neighbours, with blaming others for their mistakes. What does that make these people worth? In Book Eight he cautions:

Be not careless in deeds, nor confused in words, nor rambling in thought.

Oops. Too late for The Block. Careless, confused and rambling: all of them, albeit some more than others (as some are more incoherent, some are sleepier than others, too). But maybe I’m unkind: to have rambling thoughts, first you have to think, and we’ve seen precious little evidence of it at the table to date. See the above note about instinct.

Marcus Aurelius gives us hope for the future, however:

A man standing by a spring of clear, sweet water and cursing it. While the fresh water keeps on bubbling up. He can shovel mud into it, or dung, and the stream will carry it away, wash itself clean, remain unstained.

So as much as The Block try to hurt this community, no matter how much of their own shit they shovel onto us, once they are gone from the table, the goodness they tried to bury will reassert itself. We just need to boot them from office – ALL of the seven – next election. Also from Book Eight is this ironic comment, which reads remarkably close to The Block’s attitude towards its dwindling cadre of supporters:

You want praise from people who kick themselves every fifteen minutes, the approval of people who despise themselves.

Just think of the Block’s anti-hospital bunch whining and complaining in public meetings. Like a bunch of six-year-olds in full tantrum mode, about to hold their breath until they get their own way

Then in Book Nine, he wrote:

He would be the finer gentleman that should leave the world without having tasted of lying or pretence of any sort, or of wantonness or conceit.

Well, since they are the least honest, most disingenuous, most conceited and corrupt council in this town’s history, I doubt they can leave the table finer than when they took office. Collingwood, will, however, be much finer once they are gone. Book Nine also contains a warning that people should act together for common goals:

As thou thyself art a component part of a social system, so let every act of thine be a component part of social life. Whatever act of thine that has no reference, either immediately or remotely, to a social end, this tears asunder thy life, and does not allow it to be one, and it is of the nature of a mutiny, just as when in a popular assembly a man acting by himself stands apart from the general agreement.

Unfortunately for Collingwood, The Block have no conception of community, of social engagement, or of the greater good. They care only for their own satisfaction and rewards. They act apart from the community’s needs and desires, fulfilling only what benefits them. They don’t engage the public, ask for public input or even discuss our business in public session.

In Book Ten, we read:

He who follows reason in all things is both tranquil and active at the same time, and also cheerful and collected.

Did the image of The Block acting reasonably bring a chuckle to you? Me too. Not that it’s ever going to happen. Reason requires thought and I hearken back to the lack of evidence of such activity at the table. They are, however, cheerful in their destruction of public assets, facilities, institutions and staff morale. Also from Book Ten, an aphorism that reminds us of the corner office in town hall where so many malevolent webs are woven:

Remember that what pulls the strings is the force hidden within; there lies the power…

Most of The Block are in thrall to the administration and eschew independent thought in exchange for blind faith. But you already know that. In Book Eleven, he wrote:

And virtue they will curse, speaking harsh words.

Which pretty much sums up how The Block treats criticism, other ideas, challenges, dissent and anything or anyone else they don’t like. When the facts don’t match their beliefs, they sole-source a consultant or lawyer who will tell them what the administration wants them to hear. Always blaming others, too, for their own mistakes. And from Book Twelve:

More wasted advice. The Block always do what they will, say what they please, regardless of right or truth. In fact, usually in opposition to both.

The continuation of that opening quotation from Book Two is as follows:

Collingwood, as I always say, deserves better than this lot. And we’ll get it – next election once they are all voted out of office and a community-minded council is elected.